President Obama on Citizens United: "Imagine the Power This Will Give Special Interests Over Politicians"

July 26, 2010 at 3:07 PM ET by Jesse Lee
Twitter Facebook Email
Summary:
The President speaks out ahead of a pivotal vote in the Senate on campaign finance reforms to undo the damange of the Supreme Court's "Citizens United" decision.
[[nid:18763]]

With a Senate vote tomorrow on legislation to undo some of the damage from the Citizens United Supreme Court decision, the President laid out the stakes in no uncertain terms:

A vote to oppose these reforms is nothing less than a vote to allow corporate and special interest takeovers of our elections. It is damaging to our democracy. It is precisely what led a Republican President named Theodore Roosevelt to tackle this issue a century ago.

As the President discussed in his State of the Union address months ago, this decision essentially opened the floodgates for the influence of huge corporations, including foreign-owned corporations, on our elections.  Speaking in the Rose Garden, the President explained what this new limitless flow of undisclosed money will mean:

They can buy millions of dollars worth of TV ads –- and worst of all, they don’t even have to reveal who’s actually paying for the ads.  Instead, a group can hide behind a name like “Citizens for a Better Future,” even if a more accurate name would be “Companies for Weaker Oversight.”  These shadow groups are already forming and building war chests of tens of millions of dollars to influence the fall elections.

Now, imagine the power this will give special interests over politicians.  Corporate lobbyists will be able to tell members of Congress if they don’t vote the right way, they will face an onslaught of negative ads in their next campaign.  And all too often, no one will actually know who’s really behind those ads.

Once again, with a solution at hand, Republican leadership in the Senate stands in the way, hoping to deny an up-or-down vote:

So the House has already passed a bipartisan bill that would change all this before the next election.  The DISCLOSE Act would simply require corporate political advertisers to reveal who’s funding their activities.  So when special interests take to the airwaves, whoever is running and funding the ad would have to appear in the advertisement and claim responsibility for it -– like a company’s CEO or the organization’s biggest contributor.  And foreign-controlled corporations and entities would be restricted from spending money to influence American elections -- just as they were in the past.

Pounding his hand on his pedestal, the President emphasized again that simple bringing transparency to this kind of spending is about as common-sense as you can get:

And you’d think that reducing corporate and even foreign influence over our elections would not be a partisan issue.  But of course, this is Washington in 2010.  And the Republican leadership in the Senate is once again using every tactic and every maneuver they can to prevent the DISCLOSE Act from even coming up for an up or down vote.  Just like they did with unemployment insurance for Americans who’d lost their jobs in this recession.  Just like they’re doing by blocking tax credits and lending assistance for small business owners.  On issue after issue, we are trying to move America forward, and they keep on trying to take us back.

At a time of such challenge for America, we can’t afford these political games.  Millions of Americans are struggling to get by, and their voices shouldn’t be drowned out by millions of dollars in secret, special interest advertising.  The American people’s voices should be heard. 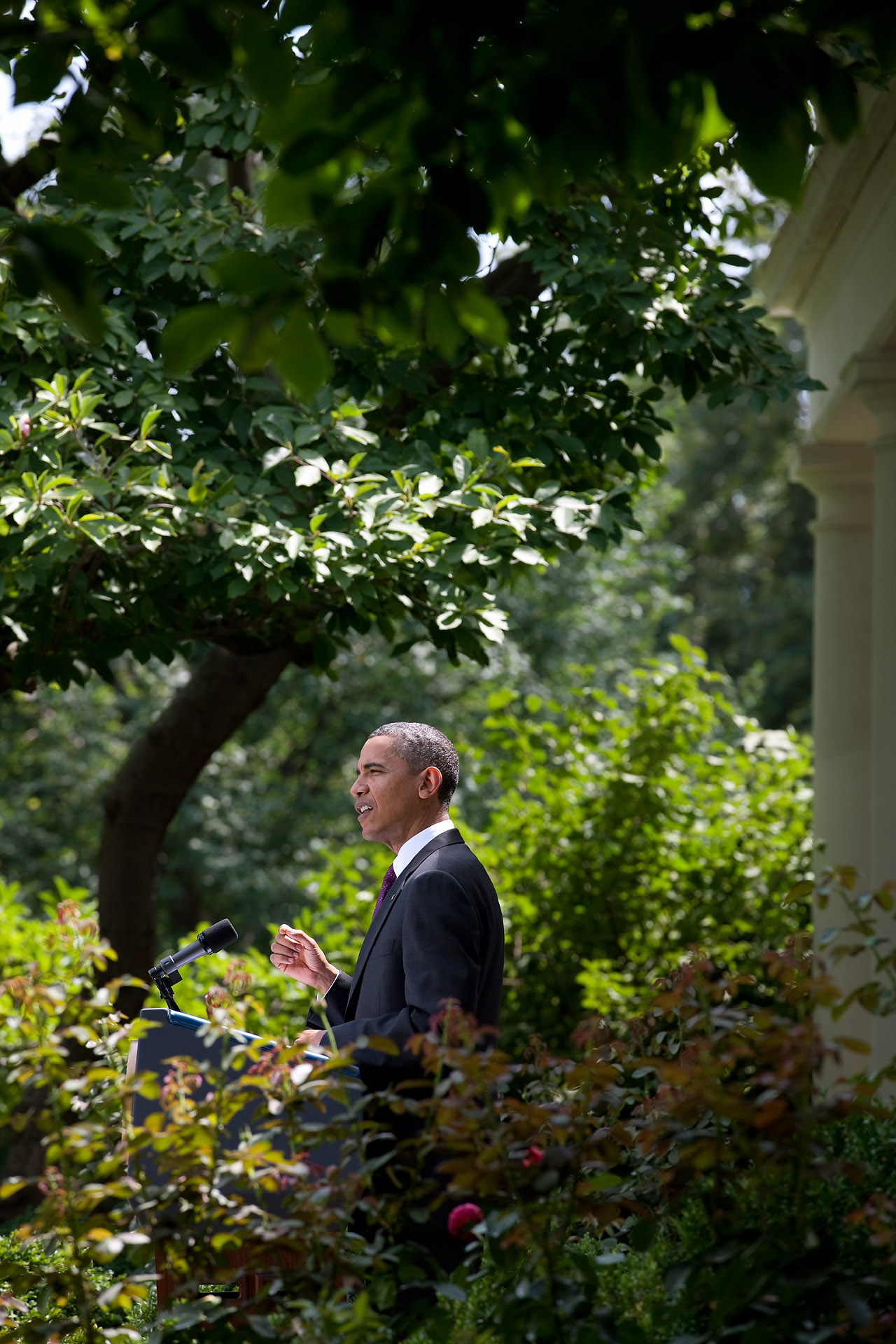 President Barack Obama makes a statement on the Senate campaign finance reform vote to the press in the Rose Garden of the White House, July 26, 2010. This comes on the heels of a Supreme Court decision last year allowing big corporations –even foreign entities – to spend an unlimited amount of money on American elections. (Official White House Photo by Chuck Kennedy)