The overall trend of economic data in recent months has been encouraging, as initiatives put in place by this Administration are taking hold, but there is still considerable work to do. Today, the Administration puts forward our comprehensive innovation agenda, which details our efforts to accelerate American leadership in educating our workers, investing in science, and building the infrastructure our companies need to succeed.  Innovation will be a key driver of the economy as we strengthen America’s position as home to the world’s best new businesses and industries, and the best jobs.

In addition to the increases last month, the estimates of private sector job growth for November (now +128,000) and December (now +139,000) were revised up. These revisions, along with the annual payroll survey revisions, show that private sector employment has now grown for eleven consecutive months.

Overall payroll employment rose by 36,000 last month. Among the sectors with the largest payroll employment growth were manufacturing (+49,000), retail and wholesale trade (+36,700), and professional and business services (+31,000). Transportation and warehousing (-38,000), construction (-32,000), finance (-10,000), and local government (-10,000) were among the sectors that subtracted from the total. Severe weather in some parts of the country may have impacted employment and hours in some industries.

The 0.4 percentage point decline in the unemployment rate to 9.0 percent in January was accounted for by a large increase in employment as measured by the household survey (which is separate from the payroll survey). The labor force participation rate was unchanged. 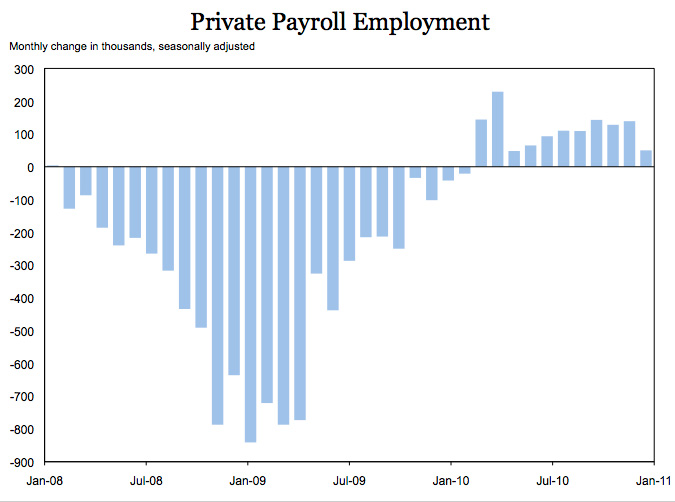