Behind-the-Scenes Video: The Motown Sound At The White House

March 1, 2011 at 2:32 PM ET by Kori Schulman
Twitter Facebook Email
Summary:
Join John Legend for a rare glimpse behind-the-scenes at rehearsals and backstage for a performance that celebrates the 50 year legacy of Motown.
Viewing this video requires Adobe Flash Player 8 or higher. Download the free player.

Continuing a favorite White House tradition, the President and First Lady welcomed renowned musical artists to the White House to celebrate music that’s at the heart of the American story. As Black History Month drew to a close, Thursday’s performance fittingly paid tribute to the legendary sound of Motown. Smokey Robinson and Stevie Wonder took the stage alongside those influenced by generations of Motown musicians.

Join John Legend for a rare glimpse behind the scenes with performers including Jamie Foxx, Sheryl Crow, Nick Jonas, Seal, Gloriana, Jordin Sparks and more in the green room during rehearsal and backstage for the performance: 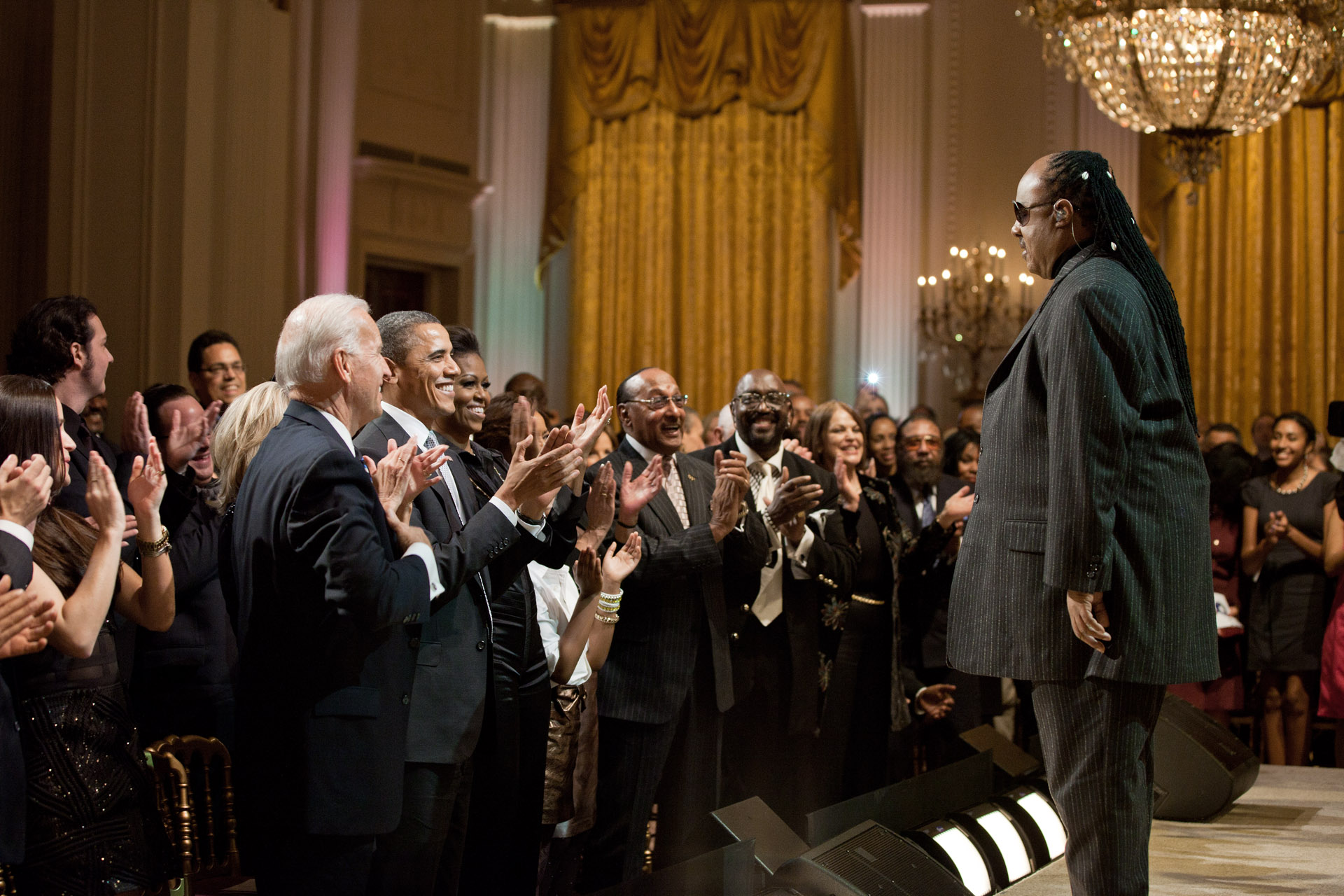 While the East Room of the White House has hosted some of the most talented musicians in the world representing an array of genres, the President pointed out that Motown is different, sharing a bit of its history:

No one knows exactly when jazz began.  Nobody knows who the first person was to sing a freedom song.  But we know where Motown came from.  We know it was born in the basement of a house on West Grand Boulevard in the Motor City -- Detroit.  (Applause.)  And we know it started with a man named Berry Gordy, who is here with us tonight.  Stand up, Berry.  (Applause.)

Now, apparently Berry tried a lot of things before following his heart into music.  A high school dropout, he failed as a record store owner, competed as an amateur boxer, finally took a job earning $85 a week on the assembly line at the local Lincoln-Mercury plant.  And it was there, watching the bare metal frames transformed into gleaming automobiles, that Berry wondered why he couldn’t do the same thing with musicians, and help turn new talent into stars.

And before long, he quit his job at the plant, borrowed $800, and set up shop in a little house with a banner across the front that read “Hitsville, U.S.A.”  His family thought he was delusional.  (Laughter.)  But as Berry said, “People thought the Wright Brothers had a stupid idea, so I say, ‘Bring on the stupid ideas.’”

As it turned out, Berry could recognize talent and potential better than anybody else in the business.  It began with Smokey Robinson, who stopped by the Motown house with a group of friends calling themselves the Miracles.  Then came one of Smokey’s neighbors -– a high school senior named Diana Ross, who started out working as a secretary.  One of the Miracles brought along his little brother, who invited a 10-year-old blind kid named Stephen Hardaway Judkins to tag along.  (Laughter.)  And then there was a group called the Jackson Five, fresh from amateur night at the Apollo, that Gladys Knight told Berry he just had to see.

Pretty soon, the basement studio was turning out hits faster than Detroit was turning out cars.  From 1961 to 1971, Motown produced 110 Top 10 hits from artists like Marvin Gaye, The Temptations, The Four Tops and The Supremes.  In the process, Motown’s blend of tight lyrics, catchy melodies and deep soul began to blur the line between music that was considered either “black” or “white.”  As Smokey Robinson said, “I recognized the bridges that were crossed, the racial problems and the barriers that we broke down with music.  I recognized that because I lived it.”

Along the way, songs like “Dancing in the Streets” and “What’s Going On” became the soundtrack of the civil rights era. Black artists began soaring to the top of the pop charts for the first time.  And at concerts in the South, Motown groups literally brought people together –- insisting that the ropes traditionally used to separate black and white audience members be taken down.

So, today, more than 50 years later, that’s the Motown legacy.  Born at a time of so much struggle, so much strife, it taught us that what unites us will always be stronger than what divides us.  And in the decades since, those catchy beats and simple chords have influenced generations of musicians, from Sheryl Crow to the Jonas Brothers.