President Obama on the Way Forward in Afghanistan

June 22, 2011 at 9:40 PM ET by Katelyn Sabochik
Twitter Facebook Email
Summary:
President Obama addresses the nation from the East Room of the White House about the way forward in Afghanistan and his plan to remove 10,000 American troops from Afghanistan by the end of this year, and a total of 33,000 by next summer.

Tonight, President Obama addressed the nation from the East Room of the White House about the way forward in Afghanistan and his plan to remove 10,000 American troops from Afghanistan by the end of this year, and a total of 33,000 by next summer.

The President reflected on the difficult decision he made in December of 2009 to order 30,000 additional troops into Afghanistan, and keeping his commitment to begin the drawdown of troops this summer:

By the time I took office, the war in Afghanistan had entered its seventh year.  But al Qaeda’s leaders had escaped into Pakistan and were plotting new attacks, while the Taliban had regrouped and gone on the offensive.  Without a new strategy and decisive action, our military commanders warned that we could face a resurgent al Qaeda and a Taliban taking over large parts of Afghanistan.

For this reason, in one of the most difficult decisions that I’ve made as President, I ordered an additional 30,000 American troops into Afghanistan.  When I announced this surge at West Point, we set clear objectives:  to refocus on al Qaeda, to reverse the Taliban’s momentum, and train Afghan security forces to defend their own country.  I also made it clear that our commitment would not be open-ended, and that we would begin to draw down our forces this July.

Tonight, I can tell you that we are fulfilling that commitment.  Thanks to our extraordinary men and women in uniform, our civilian personnel, and our many coalition partners, we are meeting our goals.  As a result, starting next month, we will be able to remove 10,000 of our troops from Afghanistan by the end of this year, and we will bring home a total of 33,000 troops by next summer, fully recovering the surge I announced at West Point.  After this initial reduction, our troops will continue coming home at a steady pace as Afghan security forces move into the lead.  Our mission will change from combat to support.  By 2014, this process of transition will be complete, and the Afghan people will be responsible for their own security.
We’re starting this drawdown from a position of strength.

The President also emphasized the important role the Afghan government must play in securing their nation and depriving al Qaeda of a safe haven:

The goal that we seek is achievable, and can be expressed simply:  No safe haven from which al Qaeda or its affiliates can launch attacks against our homeland or our allies.  We won't try to make Afghanistan a perfect place.  We will not police its streets or patrol its mountains indefinitely.  That is the responsibility of the Afghan government, which must step up its ability to protect its people, and move from an economy shaped by war to one that can sustain a lasting peace.  What we can do, and will do, is build a partnership with the Afghan people that endures –- one that ensures that we will be able to continue targeting terrorists and supporting a sovereign Afghan government.

President Obama also discussed the importance of focusing on nation building here at home, while upholding the beliefs and principles on which our nation was founded abroad:

In all that we do, we must remember that what sets America apart is not solely our power -– it is the principles upon which our union was founded.  We’re a nation that brings our enemies to justice while adhering to the rule of law, and respecting the rights of all our citizens.  We protect our own freedom and prosperity by extending it to others.  We stand not for empire, but for self-determination.  That is why we have a stake in the democratic aspirations that are now washing across the Arab world.  We will support those revolutions with fidelity to our ideals, with the power of our example, and with an unwavering belief that all human beings deserve to live with freedom and dignity.

Above all, we are a nation whose strength abroad has been anchored in opportunity for our citizens here at home.  Over the last decade, we have spent a trillion dollars on war, at a time of rising debt and hard economic times.  Now, we must invest in America’s greatest resource –- our people.  We must unleash innovation that creates new jobs and industries, while living within our means.  We must rebuild our infrastructure and find new and clean sources of energy.  And most of all, after a decade of passionate debate, we must recapture the common purpose that we shared at the beginning of this time of war.  For our nation draws strength from our differences, and when our union is strong no hill is too steep, no horizon is beyond our reach.

America, it is time to focus on nation building here at home.

In this effort, we draw inspiration from our fellow Americans who have sacrificed so much on our behalf.  To our troops, our veterans and their families, I speak for all Americans when I say that we will keep our sacred trust with you, and provide you with the care and benefits and opportunity that you deserve. 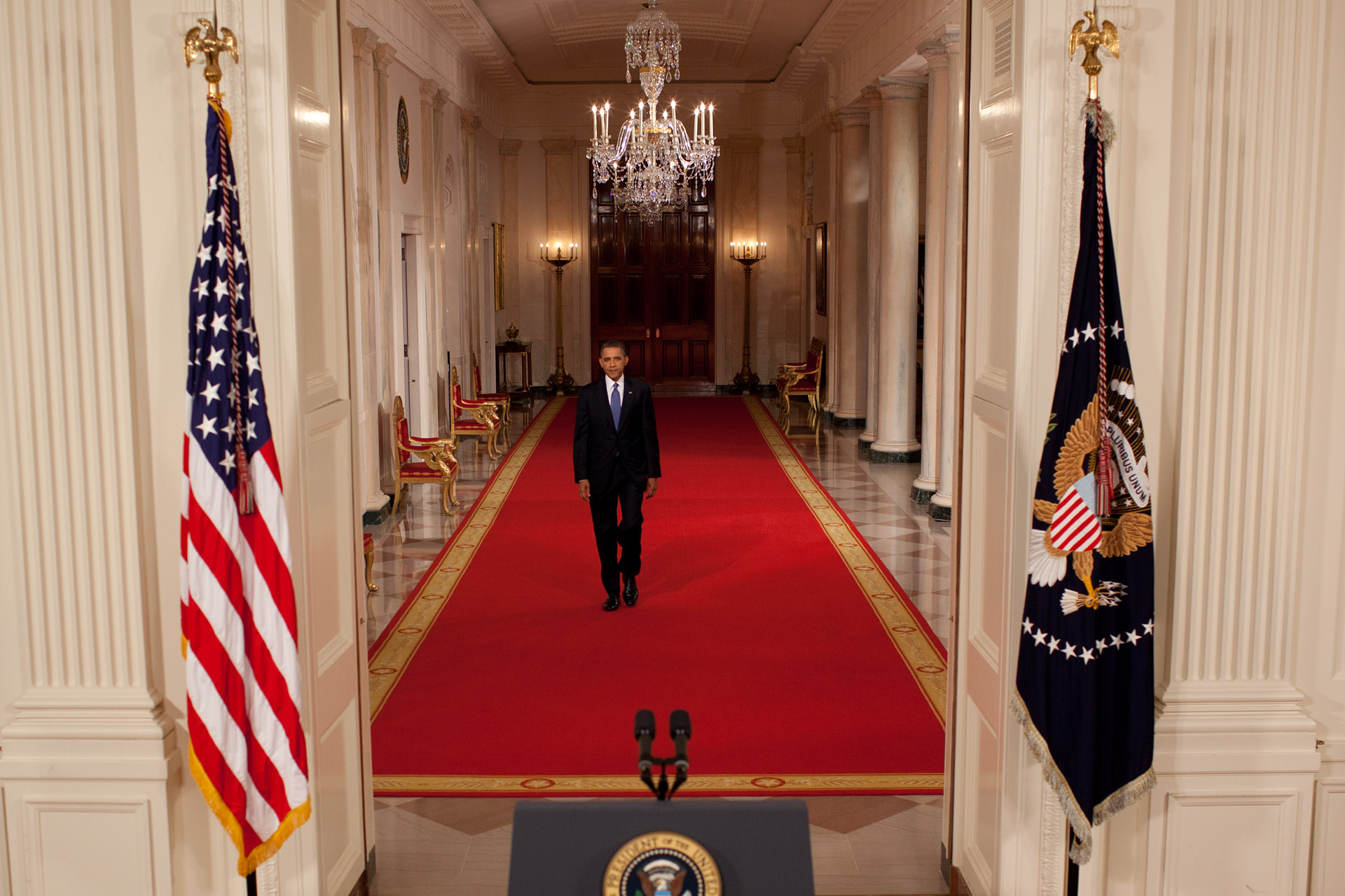 President Barack Obama approaches the podium to address the nation from the East Room of the White House to lay out his plan for implementing the draw down of American troops from Afghanistan, June 22, 2011. (Official White House Photo by Chuck Kennedy)