We the People: Announcing White House Petitions & How They Work

September 1, 2011 at 7:00 AM ET by Macon Phillips
Twitter Facebook Email
Summary:
Something exciting is coming to WhiteHouse.gov. It's called We the People and it will significantly change how the public -- You! -- engage with the White House online.

Update: The signatures threshold for petitions on the We the People platform to receive an official response from the White House has changed since this blog post was published.  See the latest signature thresholds.

Something exciting is coming to WhiteHouse.gov. It's called We the People and it will significantly change how the public -- you! -- engage with the White House online.

Our Constitution guarantees your right to petition our government.  Now, with We the People, we're offering a new way to submit an online petition on a range of issues -- and get an official response.

We're announcing We the People before it's live to give folks time to think about what petitions they want to create, and how they are going to build the support to get a response.

When will it be live? Soon.  If you want to be the first to know when the system is available, sign up for an email alert.

Here's a video we put together to explain what it is and how it works: 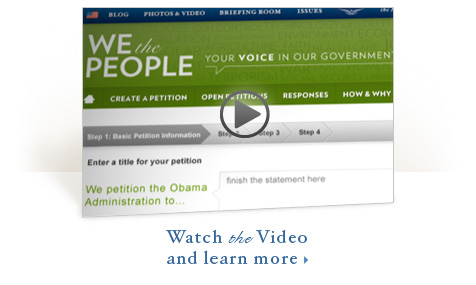 Here are the basics:

Individuals will be able to create or sign a petition that calls for action by the federal government on a range of issues.  If a petition gathers enough support (i.e., signatures) it will be reviewed by a standing group of White House staff, routed to any other appropriate offices and generate an official, on-the-record response.

How many signatures? Initially petitions that gather more than 5,000 signatures in 30 days will be reviewed and answered.

There's another aspect to this meant to emphasize the grassroots, word of mouth organizing that thrives on the internet.  At first, a petition's unique URL will only be known to its creator and will not show up anywhere else on WhiteHouse.gov.  It's up to that person to share it in their network to gather an initial amount of signatures -- initially 150 -- before it is searchable on WhiteHouse.gov.

As we move forward, your feedback about We the People will be invaluable, and there are a few ways you can share it.  Numerous pages on WhiteHouse.gov, including the We the People section, feature a feedback form.  In addition, you can use the twitter hashtag #WHWeb to give the White House digital team advice and feedback.  I'll also try to answer questions when I have time today -- you can pose them to @macon44.

Finally, while We the People is a fresh approach to official, online petitions, the United States isn't the first to try it; for example, the United Kingdom offers e-petitions, and this work was very helpful as we developed our own.