President Obama at Prayer Vigil for Connecticut Shooting Victims: "Newtown, You Are Not Alone"

December 16, 2012 at 10:44 PM ET by Ezra Mechaber
Twitter Facebook Email
Summary:
This evening the President spoke at an interfaith vigil for families of the victims, and all families from Sandy Hook Elementary School. He offered the love and prayers of a nation grieving alongside Newtown.

Today, President Obama traveled to Newtown, CT to meet with the families of those who were lost in Friday's tragic shooting, and to thank first responders for their work.

This evening the President spoke at an interfaith vigil for families of the victims, and all families from Sandy Hook Elementary School. He offered the love and prayers of a nation grieving alongside Newtown:

Here in Newtown, I come to offer the love and prayers of a nation.  I am very mindful that mere words cannot match the depths of your sorrow, nor can they heal your wounded hearts.  I can only hope it helps for you to know that you’re not alone in your grief; that our world too has been torn apart; that all across this land of ours, we have wept with you, we’ve pulled our children tight.  And you must know that whatever measure of comfort we can provide, we will provide; whatever portion of sadness that we can share with you to ease this heavy load, we will gladly bear it.

Newtown -- you are not alone.

As these difficult days have unfolded, you’ve also inspired us with stories of strength and resolve and sacrifice.  We know that when danger arrived in the halls of Sandy Hook Elementary, the school’s staff did not flinch, they did not hesitate.  Dawn Hochsprung and Mary Sherlach, Vicki Soto, Lauren Rousseau, Rachel Davino and Anne Marie Murphy -- they responded as we all hope we might respond in such terrifying circumstances -- with courage and with love, giving their lives to protect the children in their care.

We know that there were other teachers who barricaded themselves inside classrooms, and kept steady through it all, and reassured their students by saying “wait for the good guys, they’re coming”; “show me your smile.”

And we know that good guys came.  The first responders who raced to the scene, helping to guide those in harm’s way to safety, and comfort those in need, holding at bay their own shock and trauma because they had a job to do, and others needed them more.

And then there were the scenes of the schoolchildren, helping one another, holding each other, dutifully following instructions in the way that young children sometimes do; one child even trying to encourage a grown-up by saying, “I know karate.  So it’s okay.  I’ll lead the way out.” 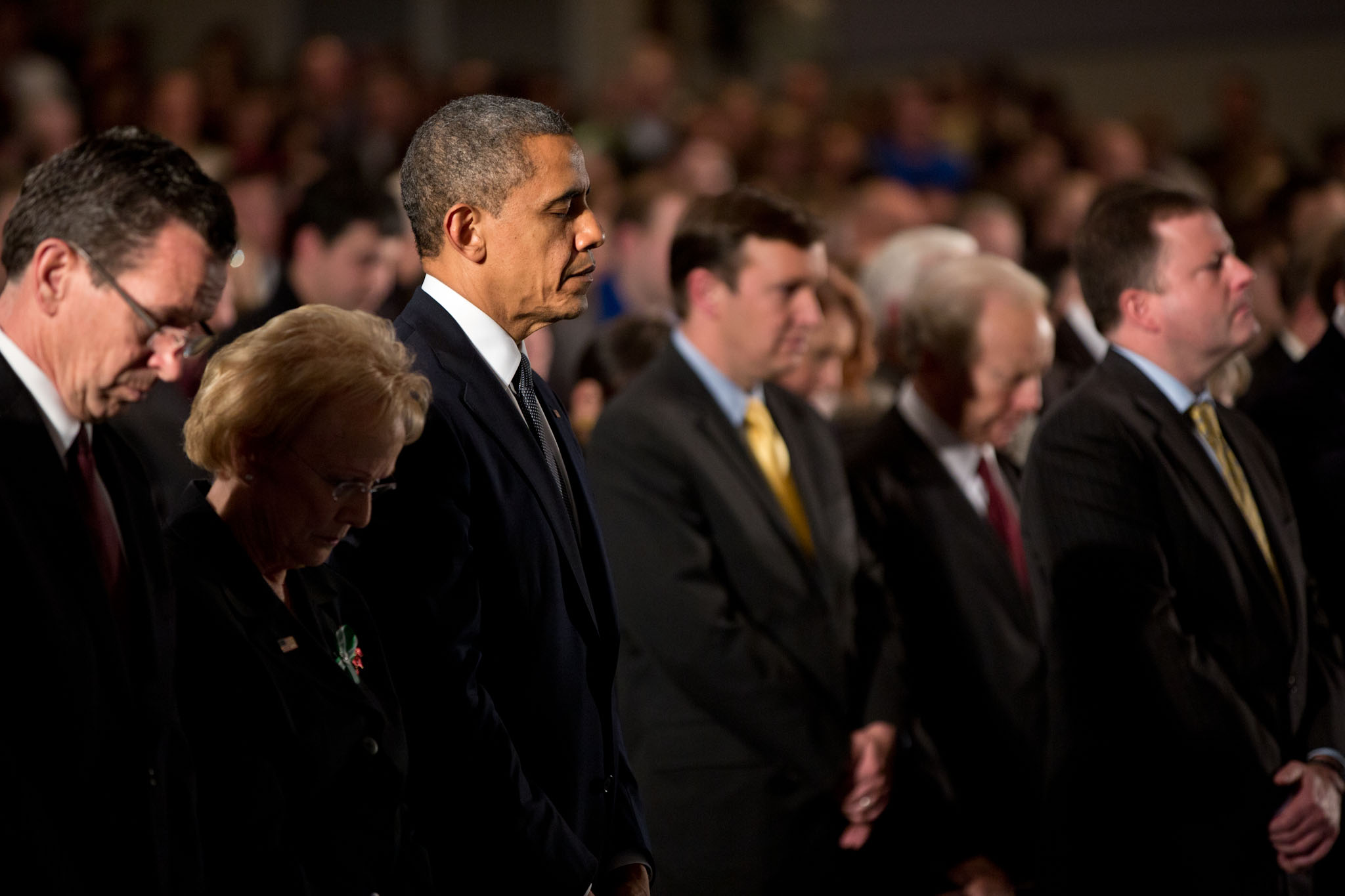 President Obama also spoke about the need to engage Americans in efforts to prevent tragedies like the one in Newtown, reiterating that America's first job is caring for our children:

And by that measure, can we truly say, as a nation, that we are meeting our obligations?  Can we honestly say that we’re doing enough to keep our children -- all of them -- safe from harm?  Can we claim, as a nation, that we’re all together there, letting them know that they are loved, and teaching them to love in return?  Can we say that we’re truly doing enough to give all the children of this country the chance they deserve to live out their lives in happiness and with purpose?

I’ve been reflecting on this the last few days, and if we’re honest with ourselves, the answer is no.  We’re not doing enough.  And we will have to change.

Since I’ve been President, this is the fourth time we have come together to comfort a grieving community torn apart by a mass shooting.  The fourth time we’ve hugged survivors.  The fourth time we’ve consoled the families of victims.  And in between, there have been an endless series of deadly shootings across the country, almost daily reports of victims, many of them children, in small towns and big cities all across America -- victims whose -- much of the time, their only fault was being in the wrong place at the wrong time.

We can’t tolerate this anymore.  These tragedies must end.  And to end them, we must change.  We will be told that the causes of such violence are complex, and that is true.  No single law -- no set of laws can eliminate evil from the world, or prevent every senseless act of violence in our society.

But that can’t be an excuse for inaction.  Surely, we can do better than this.  If there is even one step we can take to save another child, or another parent, or another town, from the grief that has visited Tucson, and Aurora, and Oak Creek, and Newtown, and communities from Columbine to Blacksburg before that -- then surely we have an obligation to try.