February 19, 2013 at 12:30 PM ET by Megan Slack
Twitter Facebook Email
Summary:
President Obama urges Congress to stop a series of severe and automatic budget cuts set to take effect in just 10 days that will hurt our economic growth, add hundreds of thousands of Americans to the unemployment rolls, and threaten military readiness.

Just 10 days from now, Congress might allow a series of severe and automatic budget cuts to take place that will hurt our economic growth, add hundreds of thousands of Americans to the unemployment rolls, and threaten military readiness.

But, as President Obama said this morning, these cuts don’t have to happen -- Congress has the power to stop them. 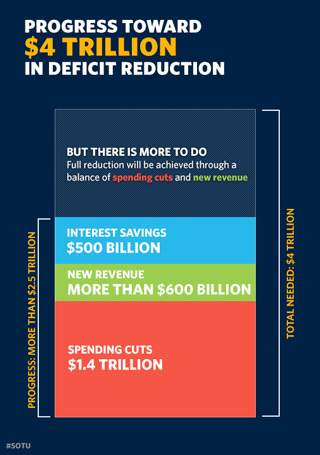 In 2011, President Obama explained today, Congress passed a law saying that if they couldn’t agree on a plan to reduce our deficit by $4 trillion – including the $2.5 trillion in deficit reduction lawmakers in both parties have already accomplished over the last few years – about $1 trillion in automatic, arbitrary cuts would start to take effect this year.

“The whole design of these arbitrary cuts was to make them so unattractive and unappealing that Democrats and Republicans would actually get together and find a good compromise of sensible cuts as well as closing tax loopholes and so forth,” President Obama said. “And so this was all designed to say we can't do these bad cuts; let’s do something smarter.  That was the whole point of this so-called sequestration.”

Now, if Congress allows this meat-cleaver approach to take place, it will jeopardize our military readiness; it will eviscerate job-creating investments in education and energy and medical research. It won’t consider whether we’re cutting some bloated program that has outlived its usefulness, or a vital service that Americans depend on every single day. It doesn’t make those distinctions.

Emergency responders like the ones who are here today -- their ability to help communities respond to and recover from disasters will be degraded. Border Patrol agents will see their hours reduced. FBI agents will be furloughed. Federal prosecutors will have to close cases and let criminals go. Air traffic controllers and airport security will see cutbacks, which means more delays at airports across the country. Thousands of teachers and educators will be laid off. Tens of thousands of parents will have to scramble to find childcare for their kids. Hundreds of thousands of Americans will lose access to primary care and preventive care like flu vaccinations and cancer screenings.

And already, the threat of these cuts has forced the Navy to delay an aircraft carrier that was supposed to deploy to the Persian Gulf. And as our military leaders have made clear, changes like this -- not well thought through, not phased in properly -- changes like this affect our ability to respond to threats in unstable parts of the world.

The President called on Congress to find a balanced approach to deficit reduction that combines tax reform with additional spending reforms – an approach that doesn’t harm our economy or the middle class.

“This is not an abstraction," President Obama said. “There are people whose livelihoods are at stake. There are communities that are going to be impacted in a negative way. And I know that sometimes all this squabbling in Washington seems very abstract, and in the abstract, people like the idea, there must be some spending we can cut, there must be some waste out there. There absolutely is. But this isn’t the right way to do it.”