No One Should Have to Live in Fear of Violence

March 7, 2013 at 3:59 PM ET by Valerie Jarrett
Twitter Facebook Email
Summary:
Thanks to the bipartisan Violence Against Women Act, which President Obama signed today, thousands of women and men across the country who are victims of domestic violence, sexual assault, dating violence and stalking will be able to access resources they need in their communities to help heal from their trauma

Ed. note: This article by Valerie Jarrett was first published on the Huffington Post. You can read it here. On Friday, March 8th at 3:45 p.m. ET, Valerie Jarrett, Senior Advisor to the President and Chair of the White House Council on Women and Girls, will participate in a session of White House Office Hours to answers your questions about the Violence Against Women Act on Twitter. Ask questions now with #WHChat, and then follow the Q&A live.

Today, President Obama signed a bill that both strengthened and reauthorized the Violence Against Women Act (VAWA).  Thanks to this bipartisan agreement, thousands of women and men across the country who are victims of domestic violence, sexual assault, dating violence and stalking will be able to access resources they need in their communities to help heal from their trauma. In addition, thousands of law enforcement officers will be better equipped to stop violence before it starts, and respond to calls of help when they are needed.

For the past 18 years, since Vice President Biden initially wrote the Act in 1994, VAWA has helped to decrease the rates of domestic violence across the country. Three years ago, our federal interagency group on violence against women began meeting to consider gaps in our country’s response to this violence and make recommendations to Congress to fill those gaps. We are proud that many of these recommendations were included in the final bill. Now, we will be better equipped to recognize violence in its early stages, and help to reduce the number of domestic violence homicides.

The reauthorization also makes a strong effort to address the extraordinarily high rates of violence among our young people. Last week, in honor of Teen Dating Violence Awareness month, I had the opportunity to speak, along with Vice President Biden, at an event with families of victims of dating violence, and youth and organizations. It was incredibly encouraging to see people of all ages united in the fight against teen dating violence.

I am proud to say that now, teens and young adults will have better access to prevention and intervention programs to help break the cycle of violence around the country. Studies have shown that one in five women will be the victim of an attempted or completed sexual assault while they are in college. We need to find a way to help these young scholars be able to focus on growing and learning, instead of being fearful of being assaulted on campus. This Act will help by requiring colleges and universities to provide information to students about dating violence, sexual assault, and stalking and improve data collection about these crimes. We call on all of our colleges and universities to make ending sexual assault a top priority.

We are also thrilled that Congress held the line and maintained protections for battered immigrants and took the important step of also reauthorizing the Trafficking Victims Protection Act in this same legislation.

Finally and very importantly, VAWA will bring justice for Native American victims. Rates of domestic violence perpetrated on Native American women are among the highest in the country. VAWA will help to improve the effectiveness and efficiency of the tribal justice system and bring perpetrators of violence to justice.

No one should have to live in fear of violence, especially in her home, and VAWA affirms that belief. Today’s signing ensures that victims and survivors can continue to be provided the vital resources they deserve. Our country is better off for it. 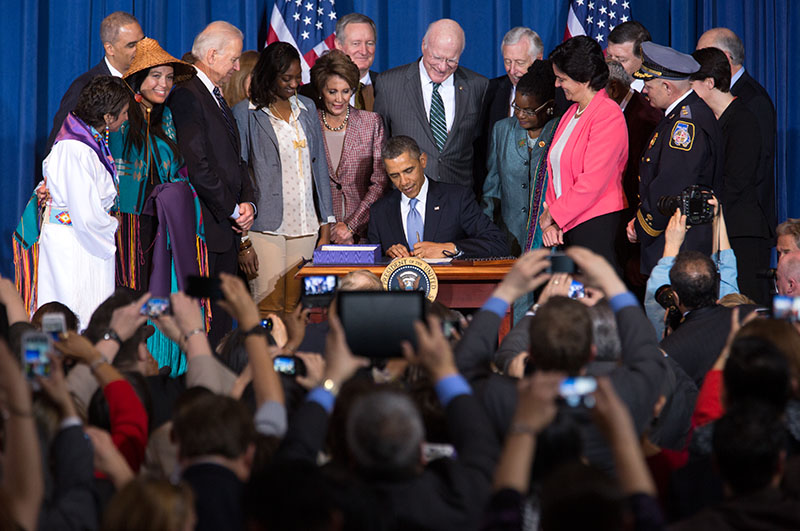 President Barack Obama signs S. 47, the “Violence Against Women Reauthorization Act of 2013,” (VAWA), which reauthorizes several Violence Against Women Act grant programs through FY 2018; and the Trafficking Victims Protection Act of 2000 through FY 2017, in the Sidney R. Yates Auditorium at the U.S. Department of Interior in Washington, D.C., March 7, 2013. (Official White House Photo by Chuck Kennedy)