January 6, 2014 at 5:10 PM ET by Dan Utech
Twitter Facebook Email
Summary:
Clean energy technologies are producing more American energy than ever before as key costs continue to come down.

Over the last five years, American inventors and investors have delivered significant progress in developing and deploying key clean energy technologies, supported by Administration policies.  Electricity production from solar and wind has doubled.  Our cars and trucks go further on a gallon of gasoline, saving families money at the pump.  And in 2012, U.S. carbon pollution fell to its lowest level in nearly 20 years. The simple fact is that key clean energy technology costs are continuing to come down, and these technologies are producing more American energy than ever before.

In 2012, wind was America’s largest source of new electricity generation capacity, accounting for 43 percent of all new installations. Altogether the United States has deployed about 60 gigawatts of wind power — enough to power 15 million homes. This growth in wind deployment has spurred more U.S. manufacturing.  A recent DOE wind market report estimates 72 percent of the wind turbine equipment installed in the United States last year was made by domestic manufacturers, nearly tripling from 25 percent in 2006-2007. And according to the American Wind Energy Association, by 2012 there were well over 80,000 workers employed in wind-related jobs in the U.S.

Supported by Administration investments, generation of electricity from wind and solar has more than doubled, and the costs of solar and wind technologies have come down significantly. 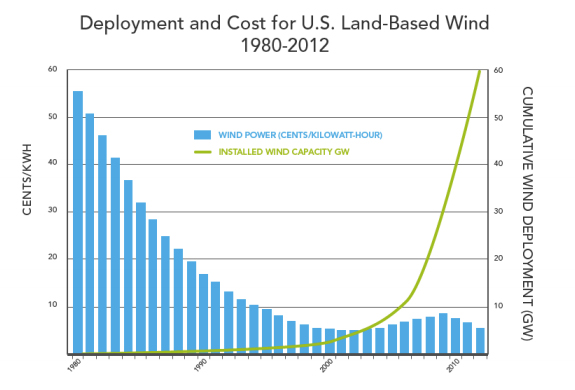 Since 2008, the price of solar panels has fallen by 75 percent, and solar installations have increased by a factor of 13. Administration support has helped to launch some largest solar projects in the world, and renewable energy permitting on federal lands has gone from virtually zero to nearly 50 approved solar, wind and geothermal utility-scale projects on public lands, since 2009, including associated transmission corridors and infrastructure to connect to established power grids. When built, these projects add up to more than 13,300 megawatts – enough energy to power 4.6 million homes and support more than 19,000 construction and operations jobs. 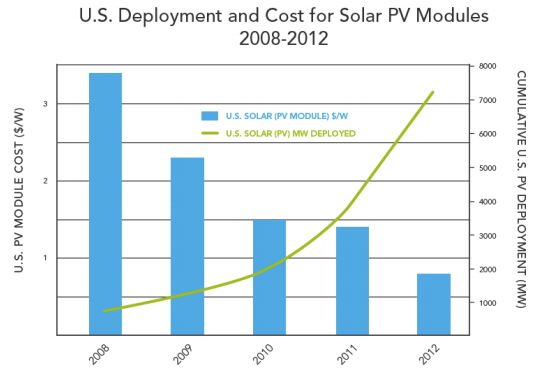 Thanks to Administration investments and fuel economy standards, we have a more fuel-efficient vehicle fleet that will continue to improve. As a result, families are saving money at the pump and we’re using less and less gasoline. Taken together, the standards the Administration has proposed to date span model years 2011 to 2025, and they represent the toughest fuel economy standards in history. Under these new standards, average fuel efficiency for cars and trucks will nearly double, reaching an average performance equivalent of nearly 55 miles per gallon by 2025.

In fact, we are already seeing more efficient cars and trucks roll off the assembly line thanks in part to these standards. Five years ago, Chrysler didn’t have any vehicles delivering 30 mpg; now they make a half dozen. Last year, Ford offered a record-setting 8 models that are expected to deliver 40 mpg or higher. And in 2012, General Motors sold more than 1 million vehicles that get 30 mpg or better.

These trends in fuel efficiency will continue and, when the Administration’s fuel economy standards are fully implemented, the average driver will save more than $8,000 at the pump. When the standards take full effect in 2025, they will reduce oil imports by 2.2 million barrels per day and cut carbon pollution by 6 billion metric tons, which is roughly equivalent to all emissions from the United States last year.

In addition to improved fuel economy, the advanced vehicles are gaining traction. For example, during the first eleven months of 2013, Americans bought more than 87,000 plug-in electric vehicles (PEVs), nearly twice as many as sold during the same period in 2012, and the number of PEV’s on the road surpassed 100,000 for the first time. In fact, the market for plug-in electric vehicles has grown much faster than the early market for hybrids. And prices are falling and export markets are opening up. Since 2008, the cost of electric vehicle batteries – which really drive the economics of EVs – has dropped by 50 percent. 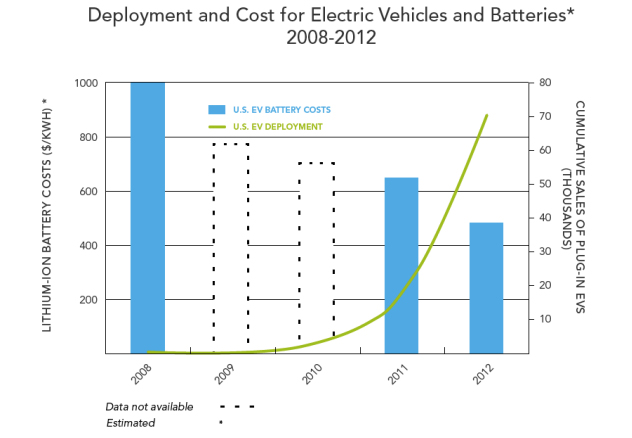