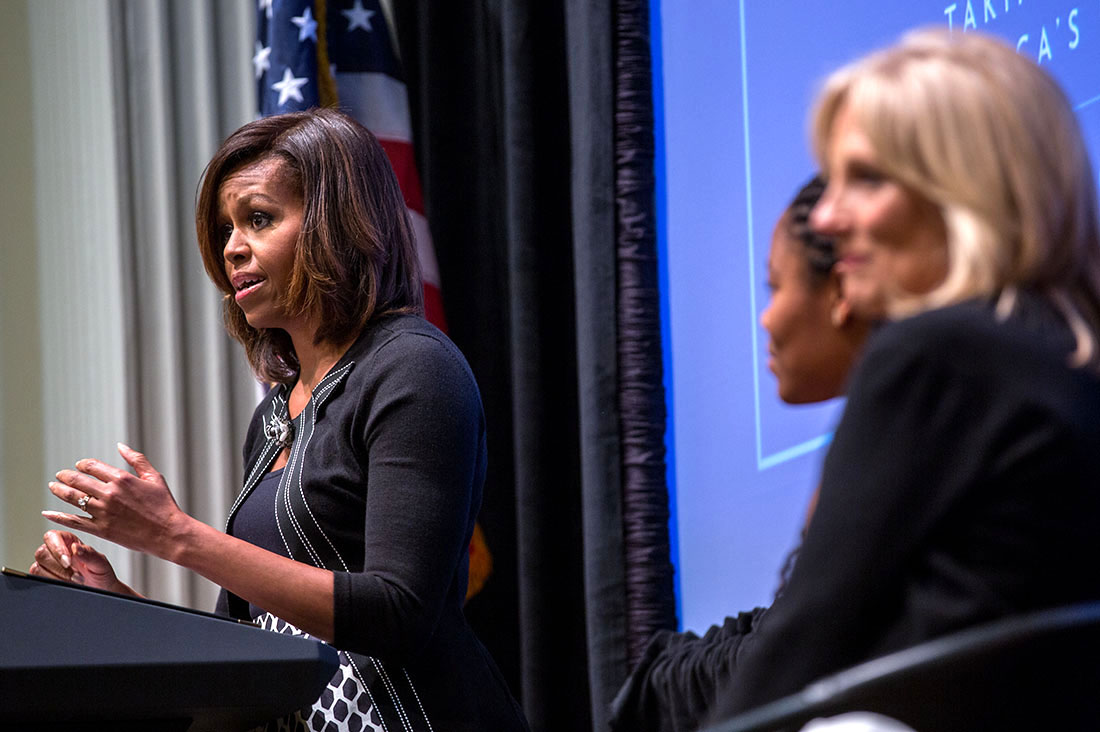 First Lady Michelle Obama, with Dr. Jill Biden and introducer Chrissandra Jackson, delivers remarks during a Joining Forces event at the American Red Cross in Washington, D.C., April 30, 2014. As part of the third anniversary of Joining Forces, they announced commitments and a pledge made by philanthropies nationwide to support veterans and military families. (Official White House Photo by Lawrence Jackson)

Today, as part of the third anniversary of Joining Forces, the First Lady and Dr. Biden announced that the Council on Foundations will lead the philanthropic community in establishing the Veterans Philanthropy Exchange, which will be an enduring forum for donors to communicate and share best practices about supporting the veteran and military communities.

"We’ve got to show our veterans and military families that our country is there for them not just while they’re in uniform, but for the long haul," said the First Lady.

The First Lady announced that the philanthropic community is pledging more than $100 million over the next five years to support veterans and military families. These commitments will fund organizations that support service members, veterans, survivors, and their families. The First Lady also called upon more donors to join this effort in order to fully support all those nonprofits and community groups that do such wonderful work for the military and veteran communities every day.

The announcement signaled the launch of the Philanthropy — Joining Forces Impact Pledge, a new commitment to bring support to service members, veterans, and military family causes over five years.

"To all the military families here today and across the country, I just want you to know that this is just a first step," added the First Lady. "We’re going to get more donors involved in this effort. We’re going to keep reaching out to people all across the country so that no matter where you live or work, you will be surrounded by a country that truly honors your service and your sacrifice, now and in the years and decades ahead. That is our pledge to you."

On behalf of the First Lady and Dr. Biden, I would like to say thank you to all of the philanthropic and nonprofit leaders who have come together to make this huge step toward creating an enduring community that will support our veterans and military families in the years and decades ahead. Our veterans and military families have sacrificed so much in their service to us, and this is a concrete way that our nation can continue to serve them, long after they served us.

Watch the remarks by the First Lady and Dr. Biden below: