President Obama Speaks on Malaysia Airlines Flight MH17, Russia and Ukraine, and the Situation in Gaza

July 18, 2014 at 1:58 PM ET by David Hudson
Twitter Facebook Email
Summary:
President Obama delivers a statement to the press in the wake of the tragic crash of Malaysia Airlines Flight MH17 yesterday, and on the current situation in Gaza.

Today, President Obama delivered a statement to the press in the wake of the tragic crash of Malaysia Airlines Flight MH17 yesterday:

Yesterday, Malaysia Airlines Flight MH17 took off from Amsterdam and was shot down over Ukraine near the Russian border.  Nearly 300 innocent lives were taken -- men, women, children, infants -- who had nothing to do with the crisis in Ukraine.  Their deaths are an outrage of unspeakable proportions.

We know at least one American citizen, Quinn Lucas Schansman, was killed.  Our thoughts and prayers are with his family for this terrible loss.

Yesterday, I spoke with the leaders of Ukraine, Malaysia, and the Netherlands.  I told them that our thoughts and prayers are with all the families and that the American people stand with them during this difficult time.  Later today, I’ll be speaking to Prime Minister Abbott of Australia, which also suffered a terrible loss.

By far, the country that lost the most people on board the plane was the Netherlands.  From the days of our founding, the Dutch have been close friends and stalwart allies of the United States of America.  And today, I want the Dutch people to know that we stand with you, shoulder to shoulder, in our grief and in our absolute determination to get to the bottom of what happened.

The President went on to detail what we know about the plane crash so far:

Evidence indicates that the plane was shot down by a surface-to-air missile that was launched from an area that is controlled by Russian-backed separatists inside of Ukraine.  We also know that this is not the first time a plane has been shot down in eastern Ukraine.  Over the last several weeks, Russian-backed separatists have shot down a Ukrainian transport plane and a Ukrainian helicopter, and they claimed responsibility for shooting down a Ukrainian fighter jet. Moreover, we know that these separatists have received a steady flow of support from Russia.  This includes arms and training.  It includes heavy weapons, and it includes anti-aircraft weapons.

"The U.N. Security Council has endorsed this investigation," the President said, "and we will hold all its members – including Russia – to their word." He then made clear that Russia, pro-Russian separatists, and Ukraine need to "adhere to an immediate cease-fire" in order to facilitate the investigation.

"Evidence must not be tampered with," he said. "Investigators need to access the crash site. And the solemn task of returning those who were lost on board the plane to their loved ones needs to go forward immediately."

The U.S. is ready to provide any necessary assistance to the investigation and has already offered the support of the FBI and the National Transportation Safety Board (NTSB), and personnel from these two agencies are already on their way to assist in the investigation. President Obama said that he will "continue to be in close contact with leaders from around the world" as the U.S. responds to this catastrophe. 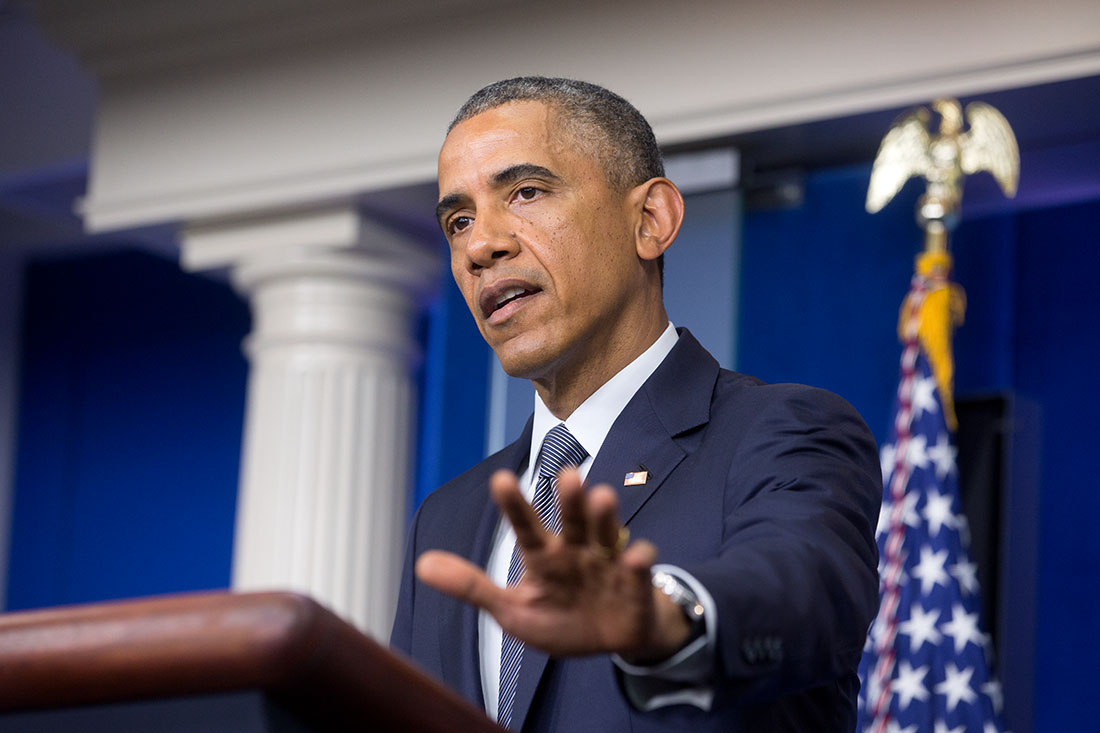 President Barack Obama delivers a statement on the crash of Malaysia Airlines Flight 17 and the situation in Ukraine, in the James S. Brady Press Briefing Room of the White House, July 18, 2014. (Official White House Photo by Chuck Kennedy)

He emphasized that the immediate focus is on "recovering those who were lost, investigating exactly what happened, and putting forward the facts." But more broadly, he made clear that peace and security must be restored in Ukraine:

For months, we’ve supported a pathway to peace, and the Ukrainian government has reached out to all Ukrainians, put forward a peace plan, and lived up to a cease-fire, despite repeated violations by the separatists -- violations that took the lives of Ukrainian soldiers and personnel.

Moreover, time and again, Russia has refused to take the concrete steps necessary to deescalate the situation.  I spoke to President Putin yesterday in the wake of additional sanctions that we had imposed.  He said he wasn’t happy with them, and I told him that we have been very clear from the outset that we want Russia to take the path that would result in peace in Ukraine, but so far at least, Russia has failed to take that path.  Instead, it has continued to violate Ukrainian sovereignty and to support violent separatists.  It has also failed to use its influence to press the separatists to abide by a cease-fire.  That’s why, together with our allies, we’ve imposed growing costs on Russia.

So now is, I think, a somber and appropriate time for all of us to step back and take a hard look at what has happened.  Violence and conflict inevitably lead to unforeseen consequences.  Russia, these separatists, and Ukraine all have the capacity to put an end to the fighting.  Meanwhile, the United States is going to continue to lead efforts within the world community to de-escalate the situation; to stand up for the sovereignty and territorial integrity of Ukraine; and to support the people of Ukraine as they courageously work to strengthen their democracy and make their own decisions about how they should move forward.

The President then remarked briefly on the situation in Gaza, following a conversation with Prime Minister Netanyahu of Israel this morning:

We discussed Israel’s military operation in Gaza, including its efforts to stop the threat of terrorist infiltration through tunnels into Israel.  I reaffirmed my strong support for Israel’s right to defend itself.  No nation should accept rockets being fired into its borders, or terrorists tunneling into its territory.  In fact, while I was having the conversation with Prime Minister Netanyahu, sirens went off in Tel Aviv.

I also made clear that the United States, and our friends and allies, are deeply concerned about the risks of further escalation and the loss of more innocent life.  And that’s why we’ve indicated, although we support military efforts by the Israelis to make sure that rockets are not being fired into their territory, we also have said that our understanding is the current military ground operations are designed to deal with the tunnels, and we are hopeful that Israel will continue to approach this process in a way that minimizes civilian casualties and that all of us are working hard to return to the cease-fire that was reached in November of 2012.

Secretary Kerry is working to support Egypt’s initiative to pursue that outcome.  I told Prime Minister Netanyahu that John is prepared to travel to the region following additional consultations.