Income, Poverty, and Health Insurance in the United States in 2013

September 16, 2014 at 11:03 AM ET by Jason Furman and Betsey Stevenson
Twitter Facebook Email
Summary:
A new Census Bureau report shows that key indicators of poverty and family income improved in 2013 -- and there is reason to believe that this progress has continued into 2014, as the labor market has strengthened and millions have gained health insurance coverage. At the same time, the data also offer a clear illustration of the large amount of work that remains to strengthen the middle class in the wake of the worst recession since the Great Depression.

Today’s report from the Census Bureau shows that key indicators of poverty and family income improved in 2013. Moreover, there is reason to believe that this progress has continued into 2014, as the labor market has strengthened and millions have gained health insurance coverage. At the same time, the data also offer a clear illustration of the large amount of work that remains to strengthen the middle class in the wake of the worst recession since the Great Depression. To address this challenge, the President will continue to do everything in his power to ensure that hard work pays off with decent wages and financial security. And he will also continue to push Congress to take constructive steps that invest in job creation, boost wages, and ensure equal pay for equal work.

FIVE KEY POINTS IN TODAY’S REPORT FROM THE CENSUS BUREAU

1. The overall poverty rate declined to 14.5 percent in 2013 due to the largest one-year drop in child poverty since 1966. The poverty rate for people under age 18 fell by 1.9 percentage point from 2012 to 2013, equivalent to 1.4 million young people lifted out of poverty. Poverty rates for other age groups (18-64 and 65+) were little changed. The official poverty rate for 2013 remains above its pre-recession rate. This official poverty rate does not reflect the full effect of anti-poverty policies because it excludes the direct effect of key measures like the Supplemental Nutrition Assistance Program (SNAP) and the Earned Income Tax Credit (EITC). Notably, the EITC was expanded in 2009, and those expansions were subsequently extended. Accounting for such policies would reduce the number of people counted as being in poverty by millions. 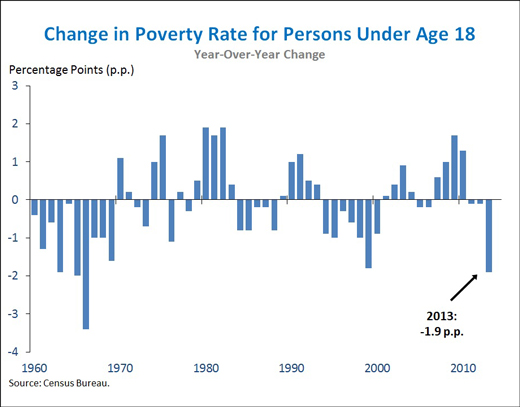 2. Real median income for family households rose by $603 in 2013 but remains below pre-crisis levels. Income gains in 2013 were driven by family households, as overall median household income (which also includes households with single people living alone or with unrelated individuals) also rose, but by a smaller $180. As discussed below, there is reason to believe that this progress has continued into 2014. Nevertheless, the typical family has still not seen its income recover from the deep recession which came on top of a decade in which incomes stagnated for the middle class, itself part of a longer-term trend of increasing income inequality. 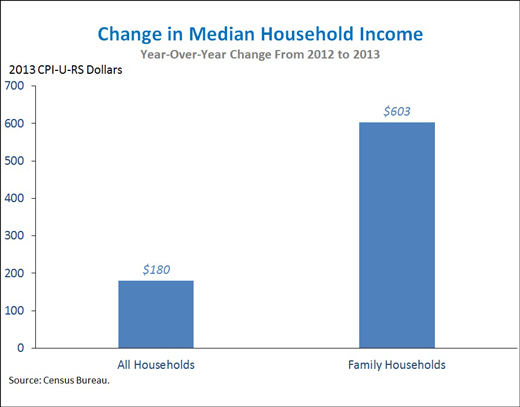 3. While still too wide, the gender pay gap narrowed slightly in 2013, with the female-to-male earnings ratio climbing above 78 percent for the first time on record. Looking over the last thirty years, the gender pay gap narrowed in the 1980s and 1990s, but progress stalled in the 2000s. Indeed, the female-to-male earnings ratio had been unchanged, on balance, from 2002 to 2012. The progress made in 2013 reflected a $817 increase in average earnings for female full-time, year-round workers. At the same time, earnings for men and women are still far from parity. This issue remains a high priority for the President, which is why earlier this year he built on previous steps and signed an Executive Order that will empower workers at Federal contractors to negotiate for fair pay. The President will also continue to push Congress to take steps like passing the Paycheck Fairness Act. 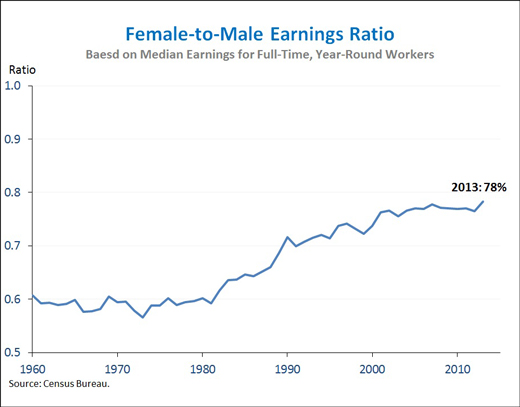 These Census Bureau estimates are part of the first set of estimates produced using a revised suite of health insurance questions in the Current Population Survey. These revised questions are designed to address longstanding shortcomings in the older questions and will generate a more accurate picture of health insurance coverage going forward. The methodological change does mean that these data are not suitable for evaluating changes in insurance coverage from 2012 to 2013. Nevertheless, other data out today from the Census Bureau’s American Community Survey showed that coverage expanded modestly from 2012 and 2013, and data released by the National Center for Health Statistics showed a sharp increase in coverage from 2013 through early 2014. For a detailed analysis of all of the health insurance coverage data released today, see this companion blog post. 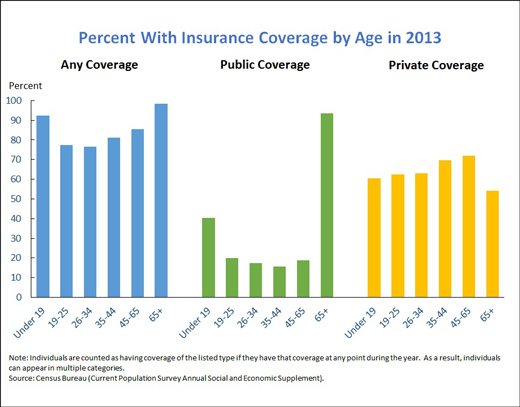 5. The data released today by the Census Bureau cover the calendar year 2013, and so do not reflect the notable improvement in the labor market seen over the first eight months of 2014. In particular, job growth so far this year has averaged 215,000 per month, up from 194,000 per month last year. As of August, the unemployment rate was down 1.1 percentage point from a year earlier, with three-quarters of that decline due to falling long-term unemployment. Further, average hourly earnings for private production and nonsupervisory workers were up 2.5 percent from a year ago, the largest year-over-year increase since 2010. While data on poverty and family income in 2014 will not be available until this time next year, the recent labor market data suggest that those figures will likely show further improvement as families continue to recover from the worst economic crisis since the Great Depression.

Next year’s report is also likely to show that health insurance coverage increased sharply in 2014, reflecting an improving economy and, much more importantly, the effects of coverage expansions under the Affordable Care Act. Notably, an analysis published last month in the New England Journal of Medicine estimated that the uninsurance rate among non-elderly adults dropped by 5.2 percentage points from late 2013 through the second quarter of 2014, corresponding to 10.3 million people gaining coverage. 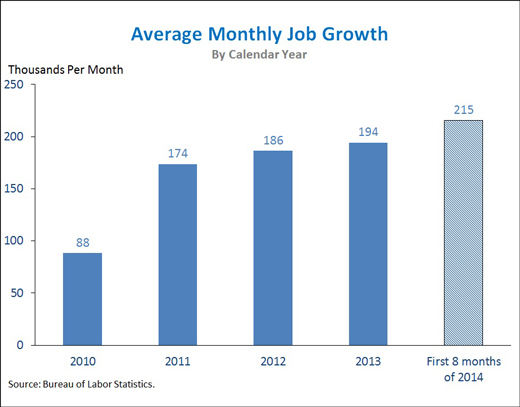