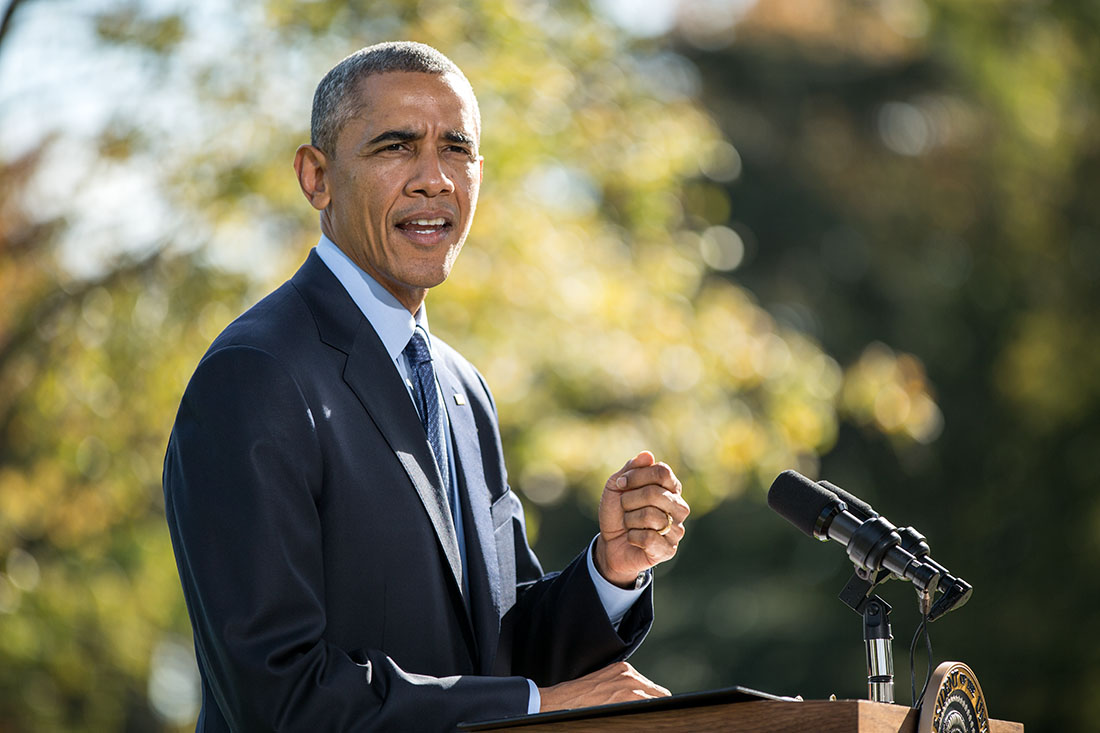 Speaking on the South Lawn of the White House today, President Obama provided an update on America's comprehensive response to end the Ebola outbreak. So far, of the seven Americans treated for Ebola, all have survived. Only two people have contracted Ebola on American soil -- the two Dallas nurses who treated a patient who had contracted the virus in West Africa. And the only American still undergoing treatment is Dr. Craig Spencer, who contracted the disease abroad while working to protect others.

The President saluted his service and the service of all those men and women who are working tirelessly to stop Ebola in its tracks. "We know that the best way to protect Americans ultimately is going to stop this outbreak at the source," he said. "And I just had the privilege of speaking with some of the men and women who are working to do just that -- our Disaster Assistance Response Team (DART) on the ground in West Africa."

"We've got extraordinary Americans with experience, talent, dedication, who are willing to put themselves on the front lines to get things done."

From increasing the number of Ebola treatment units and burial teams to expanding the pipeline of medical personnel, equipment and supplies to launching an aggressive education campaign in-country, American health care workers in Africa are the "strategic and operational backbone of America's response" to the virus.

These are the folks that, from the minute that we saw this Ebola outbreak growing larger than we had seen traditionally, were deployed, were on the ground, and were helping to coordinate the countries where the outbreak is happening to make sure that the response was effective.

And it's typical of what America does best -- when others are in trouble, when disease or disaster strikes, Americans help. And no other nation is doing as much to make sure that we contain and ultimately eliminate this outbreak than America.

Their dedication and hard work is starting to pay off, as the essential public health infrastructure is strengthening. As we work to fight the epidemic at its source, it's critical that we maintain our vigilance at home.

We're going to need to make sure that our doctors and our health care professionals here in the United States are properly trained and informed and that they are coordinated if and when an Ebola case crops up here in the United States.  But what’s also critically important is making sure that all the talent, skill, compassion, professionalism, dedication and experience of our folks here can be deployed to help those countries deal with this outbreak at the source.

That's why the CDC announced updated guidelines on monitoring and movement guidance that is "sensible, based in science, and tailored to the unique circumstances of each health worker that may be returning from one of these countries after they have provided the kind of help that they need."

"This disease can be contained. It will be defeated. Progress is possible."

The President laid out the bottom line on Ebola:

This disease can be contained. It will be defeated. Progress is possible. But we're going to have to stay vigilant and we've got to make sure that we're working together. We have to keep leading the global response. America cannot look like it is shying away because other people are watching what we do, and if we don't have a robust international response in West Africa, then we are actually endangering ourselves here back home. In order to do that, we've got to make sure that those workers who are willing and able and dedicated to go over there in a really tough job, that they’re applauded, thanked and supported. That should be our priority.

America in the end is not defined by fear. That's not who we are. America is defined by possibility. And when we see a problem and we see a challenge, then we fix it.  We don't just react based on our fears. We react based on facts and judgment and making smart decisions. That's how we have built this country and sustained this country and protected this country. That's why America has defined progress -- because we're not afraid when challenges come up.