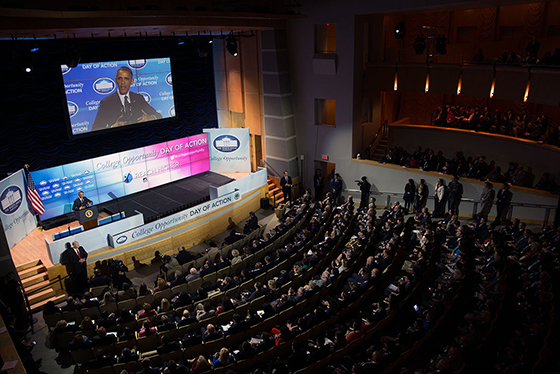 Yesterday, President Obama, Vice President Biden, and the First Lady joined college presidents and other education leaders from around the nation at the second White House College Opportunity Day of Action, where organizations announced over 500 new actions to help more students prepare for and graduate from college. As part of this convening, the White House Office of Science and Technology Policy worked with college and university presidents, leaders of philanthropy and non-profit organizations, and CEOs of private sector companies to generate 110 bold new commitments to increase STEM degree access, preparation, and completion for more students from low income and underserved backgrounds in addition to women and minorities currently underrepresented in STEM fields.

Maintaining the momentum from the January College Opportunity Summit, OSTP organized regional convenings on improving STEM undergraduate learning on college campuses this past fall, to learn the progress being made by institutions and organizations who made January commitments and to broaden the coalition for yesterday’s Day of Action.

Among the 110 new initiatives and actions to improve STEM college completion being announced yesterday, are efforts to: increase STEM graduation rates at college and universities up to 35% over the next 5 to 10 years—producing thousands of more students that help us reach the Administration’s goal of 1 million additional STEM graduates by 2022, expand mentoring, financial aid, tutoring, and internships for women and minorities pursuing STEM fields, move away from traditional lecture-based courses to more active classrooms that encourage students to solve problems in small groups and hands-on experiments and modeling- methods that both increase student learning and student retention in STEM majors, and make progress on the Administration’s goal to prepare more excellent K-12 teachers with expertise in STEM areas.

The day featured new Administration commitments, including the release of a Dear Colleagues letter from the National Science Foundation (NSF) calling for proposals to pilot innovations for helping students learn the mathematics taught in the first two years of college and to plan and execute workshops in 2015 on using research to improve student success in mathematics in the first two years of college. Programs supporting this work in the Directorate for Education and Human Resources include Improving Undergraduate STEM Education, Advanced Technological Education, Historically Black Colleges and Universities Undergraduate Program, Tribal Colleges and Universities Program, Innovative Technology Experiences for Students and Teachers, and Discovery Research K-12.

Improving STEM degree completion was one of four key action areas for the Day of Action which also included, building networks of colleges focused on promoting completion, creating K-16 partnerships around college readiness, and investing in high school counselors as part of the First Lady’s Reach Higher initiative.