President Obama on Attorney General Holder: "He Has Been One of Our Finest"

Yesterday evening, the President spoke at the portrait unveiling ceremony for U.S. Attorney General Eric Holder. The event marked Holder's anticipated departure from the Department of Justice after more than six years of service as Attorney General.

Calling him "one of our finest," President Obama quickly detailed some of Holder's major accomplishments over the past six years:

Hundreds of terrorism convictions.  The largest mafia takedown in history.  Billion-dollar financial fraud cases. Long-overdue reforms to our criminal justice system.  Thanks in part to Eric’s leadership, the overall crime rate and overall incarceration rate declined together -- for the first time in 40 years last year.

The President also talked about the Attorney General's work to restore "the conscience of the nation" -- the Civil Rights Division of the Department of Justice. Under Holder's leadership, the Department has relentlessly defended the Voting Rights Act, along with the right to vote; challenged discriminatory state immigration laws; prosecuted human trafficking and hate crimes in record numbers; and worked to ensure that same-sex couples are treated equally under the law.

"Having good men in positions of power and authority who are willing to fight for what's right -- that's a rare thing. That's a powerful thing. It's something that shapes our future in ways we don't even understand."

"With Eric Holder as its lawyer, America has become a better country," the President said, before turning to the Attorney General. "Saying goodbye is bittersweet. You have done a remarkable job. It's hard to let you go." 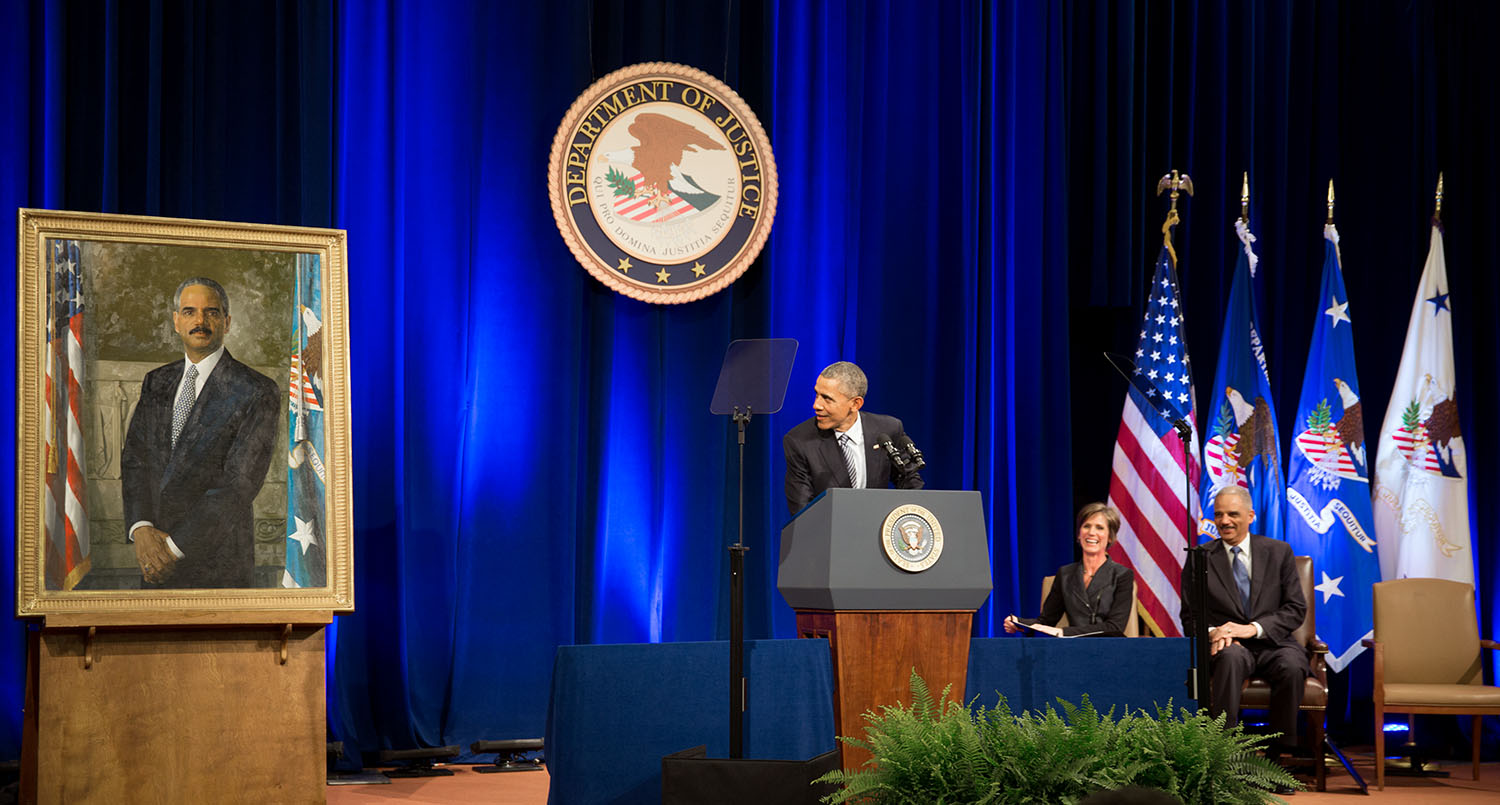 In the Attorney General's remarks, he expressed his gratitude for the opportunity to work with the Justice Department for almost four decades.

"I leave this place proud of what we have accomplished over the last six years, and grateful for all that DOJ has given me these past 39 years," Holder said. "This has been my home, and you will always be my family."

He made clear, however, that the work is not yet over:

Reform of our criminal justice system must continue.  And under Loretta and Sally, I'm sure that will be the case.  The historic wrongs visited upon our native people must be righted.  The widening gap of income inequality must be reversed.  And in the defense of our nation, we must always adhere -- always adhere -- to the values that define us.  And at all costs -- all costs  -- the right to vote must be protected.

"That list may seem daunting," he said. "But if we are true to who we are as Americans, no problem is too big, no issue insurmountable."

"Our destiny as Americans is always ahead of us.  Our gaze is always focused on the horizon."

In closing, the Attorney General thanked his family and friends, his Department colleagues, the President and other Administration officials -- and America herself, "who gave a black kid from East Elmurst, Queens, New York City, more support and opportunities than any individual could have hoped for."