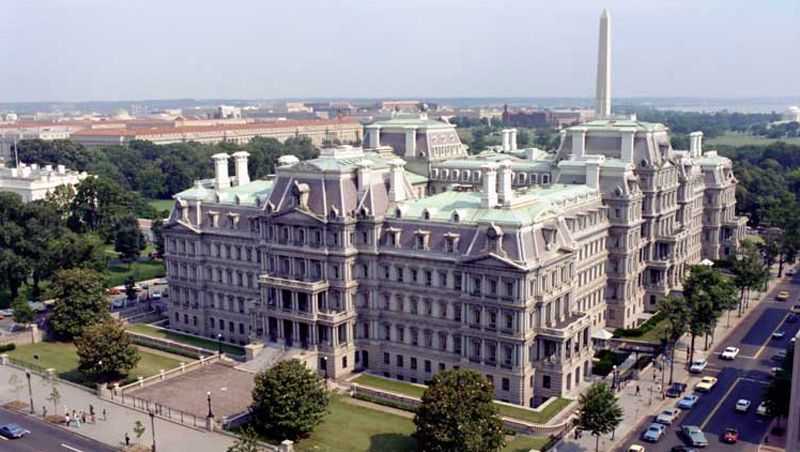 Originally built for the State, War and Navy Departments between 1871 and 1888, the Eisenhower Executive Office Building now houses a majority of offices for White House staff.

The Eisenhower Executive Office Building is located next to the West Wing, and houses a majority of offices for White House staff. Originally built for the State, War and Navy Departments between 1871 and 1888, the EEOB is an impressive building that commands a unique position in both our national history and architectural heritage.

Designed by Supervising Architect of the Treasury Alfred Mullett, the granite, slate and cast iron exterior makes the EEOB one of America's best examples of the French Second Empire style of architecture. It took 17 years for Mullett's masterpiece to finally be completed.

Take a tour of the EEOB here.

Next door to the White House, the Eisenhower Executive Office Building (EEOB) commands a unique position in both our national history and architectural heritage. Designed by Supervising Architect of the Treasury, Alfred B. Mullett, it was built from 1871 to 1888 to house the growing staffs of the State, War, and Navy Departments, and is considered one of the best examples of French Second Empire architecture in the country. In bold contrast to many of the somber classical revival buildings in Washington, the EEOB's flamboyant style epitomizes the optimism and exuberance of the post-Civil War period.

The State, War, and Navy Building, as it was originally known, housed the three Executive Branch Departments most intimately associated with formulating and conducting the nation's foreign policy in the last quarter of the nineteenth century and the first quarter of the twentieth century -- the period when the United States emerged as an international power. The building has housed some of the nation's most significant diplomats and politicians and has been the scene of many historic events.

The history of the EEOB began long before its foundations were laid. The first executive offices were constructed on sites flanking the White House between 1799 and 1820. A series of fires (including those set by the British in 1814) and overcrowded conditions led to the construction of the existing Treasury Building. In 1866, the construction of the North Wing of the Treasury Building necessitated the demolition of the State Department building to the northeast of the White House. The State Department then moved to the D.C. Orphan Asylum Building while the War and Navy Departments continued to make do with their cramped quarters to the west of the White House.

In December of 1869, Congress appointed a commission to select a site and prepare plans and cost estimates for a new State Department Building. The commission was also to consider possible arrangements for the War and Navy Departments. To the horror of some who expected a Greek Revival twin of the Treasury Building to be erected on the other side of the White House, the elaborate French Second Empire style design by Alfred Mullett was selected, and construction of a building to house all three departments began in June of 1871.

Construction took 17 years as the building slowly rose wing by wing. When the EEOB was finished in 1888, it was the largest office building in Washington, with nearly 2 miles of black and white tiled corridors. Almost all of the interior detail is of cast iron or plaster; the use of wood was minimized to insure fire safety. Eight monumental curving staircases of granite with over 4,000 individually cast bronze balusters are capped by four skylight domes and two stained glass rotundas.

Completed in 1875, the State Department's south wing was the first to be occupied, with its elegant four-story library (completed in 1876), Diplomatic Reception Room, and Secretary's office decorated with carved wood, Oriental rugs, and stenciled wall patterns. The Navy Department moved into the east wing in 1879, where elaborate wall and ceiling stenciling and marqetry floors decorated the office of the Secretary. The Indian Treaty Room, originally the Navy's library and reception room, cost more per square foot than any other room in the building because of its rich marble wall panels, tiled floors, 800-pound bronze sconces, and gold leaf ornamentation. This room has been the scene of many Presidential news conferences and continues to be used for conferences and receptions attended by the President. The remaining north, west, and center wings were constructed for the War Department and took an additional 10 years to build. Notable interiors include an ornate cast-iron library, the Secretary's suite, and the stained glass skylight over the west wing's double staircase.

Many of our most celebrated national figures have participated in historical events that have taken place within the EEOB's granite walls. Theodore and Franklin D. Roosevelt, William Howard Taft, Dwight D. Eisenhower, Lyndon B. Johnson,Gerald Ford, and George H. W. Bush all had offices in this building before becoming President. It has housed 16 Secretaries of the Navy, 21 Secretaries of War, and 24 Secretaries of State. Winston Churchill once walked its corridors and Japanese emissaries met here with Secretary of State Cordell Hull after the bombing of Pearl Harbor. President Herbert Hoover occupied the Secretary of Navy's office for a few months following a fire in the Oval Office on Christmas Eve 1929. In recent history, President Richard Nixon had a private office here. Vice President Lyndon B. Johnson was the first in a succession of Vice Presidents to the present day that have had offices in the building.

The French Second Empire style originated in Europe, where it first appeared during the rebuilding of Paris in the 1850s and 60s. Based upon French Renaissance prototypes, such as the Louvre Palace, the Second Empire style is characterized by the use of a steep mansard roof, central and end pavilions, and an elaborately sculptured facade. Its sophistication appealed to visiting foreigners, especially in England and America, where as early as the late 1850s, architects began adopting isolated features and, eventually, the style as a coherent whole. Alfred Mullett's interpretation of the French Second Empire style was, however, particularly Americanized in its lack of an ornate sculptural program and its bold, linear details.

While it was only a project on the drafting table, the design of the EEOB was subject to controversy. When it was completed in 1888, the Second Empire style had fallen from favor, and Mullett's masterpiece was perceived by capricious Victorians as only an embarrassing reminder of past whims in architectural preference. This was especially the case with the EEOB, since previous plans for a building on the same site had been in the Greek Revivial style of the Treasury Building.

In 1917, the Commission of Fine Arts requested John Russell Pope to prepare sketches of the State, War, and Navy building that incorporated Classical facades. During the same year, Washington architect Waddy B. Wood completed a drawing depicting the building remodeled to resemble the Treasury Building. This project was revived in 1930 when Congress appropriated $3 million for its construction. Wood worked for 3 years on the design to remove the granite walls and replace them with marble, but the project was shelved due to financial burdens imposed by the Great Depression. In 1957, President Eisenhower's Advisory Committee on Presidential Office Space recommended demolition of the Executive Office Building and construction of a modern office facility. However, the public outcry, and the overwhelming expenses associated with the demolition, saved the building.

The building has not been without detractors. It has been referred to as Mullett's "architectural infant asylum" by writer Henry Adams. President Harry S. Truman came to the defense of the building when it was threatened by demolition in 1958. He said it was "the greatest monstrosity in America". Noted architectural historian Henry-Russell Hitchcock, however described it as "perhaps the best extant example in America of the second empire."

The building was designated a National Historic Landmark in 1969. In 1972, it was listed on the National Register of Historic Places and the District of Columbia Inventory of Historic Sites. Since 1981, the Office of Administration of the Executive Office of the President has actively pursued a rigorous program of rehabilitation of the EEOB. The entire structure has benefited from an upgraded maintenance program that has also included restoration of some of the EEOB's most spectacular historic interiors.

In 1988, Congress enacted legislation to allow the Office of Administration to accept gifts and loans from the public on behalf of the EEOB to be used for preservation and restoration purposes. Persons interested in finding out more about the preservation program or in making a contribution should contact the Preservation Office.