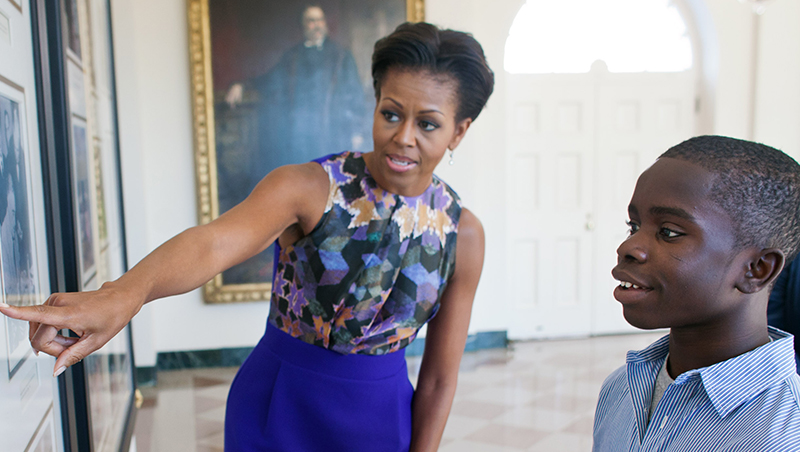 First Lady Michelle LaVaughn Robinson Obama is a lawyer, writer, and the wife of the 44th and current President, Barack Obama. She is the first African-American First Lady of the United States. Through her four main initiatives, she has become a role model for women and an advocate for healthy families, service members and their families, higher education, and international adolescent girls education.

When people ask First Lady Michelle Obama to describe herself, she doesn't hesitate to say that first and foremost, she is Malia and Sasha's mom.

But before she was a mother — or a wife, lawyer, or public servant — she was Fraser and Marian Robinson's daughter.

The Robinsons lived in a brick bungalow on the South Side of Chicago. Fraser was a pump operator for the Chicago Water Department, and despite being diagnosed with multiple sclerosis at a young age, he hardly ever missed a day of work. Marian stayed home to raise Michelle and her older brother Craig, skillfully managing a busy household filled with love, laughter, and important life lessons.

A product of Chicago public schools, Michelle Robinson studied sociology and African-American studies at Princeton University. After graduating from Harvard Law School in 1988, she joined the Chicago law firm Sidley & Austin, where she later met Barack Obama, the man who would become the love of her life.

After a few years, Mrs. Obama decided her true calling was working with people to serve their communities and their neighbors. She served as assistant commissioner of planning and development in Chicago's City Hall before becoming the founding executive director of the Chicago chapter of Public Allies, an AmeriCorps program that prepares youth for public service.

Mrs. Obama has continued her efforts to support and inspire young people during her time as First Lady.

In 2010, she launched Let’s Move!, bringing together community leaders, educators, medical professionals, parents, and others in a nationwide effort to address the challenge of childhood obesity. Let’s Move! has an ambitious goal: to solve the epidemic of childhood obesity within a generation. Whether it's providing healthier food in our schools, helping kids be more physically active, or urging companies to market healthier foods to our children, Let’s Move! is focused on giving parents the support they need to make healthier choices for their kids.

In 2011, Mrs. Obama and Dr. Jill Biden came together to launch Joining Forces, a nationwide initiative calling all Americans to rally around service members, veterans, and their families and support them through wellness, education, and employment opportunities. Joining Forces works hand in hand with the public and private sector to ensure that service members, veterans, and their families have the tools they need to succeed throughout their lives.

In 2014, Mrs. Obama launched the Reach Higher Initiative, an effort to inspire young people across America to take charge of their future by completing their education past high school, whether at a professional training program, a community college, or a four-year college or university. Reach Higher aims to ensure that all students understand what they need to complete their education by working to expose students to college and career opportunities; helping them understand financial aid eligibility; encouraging academic planning and summer learning opportunities; and supporting high school counselors who do essential work to help students get into college.

In 2015, Mrs. Obama joined President Obama to launch Let Girls Learn, a U.S. government-wide initiative to help girls around the world go to school and stay in school. As part of this effort, Mrs. Obama is calling on countries across the globe to help educate and empower young women, and she is sharing the stories and struggles of these young women with young people here at home to inspire them to commit to their own education.

As First Lady, Mrs. Obama looks forward to continuing her work on the issues close to her heart — supporting military families, helping children lead healthier lives, and encouraging all our young people to fulfill their boundless promise.