Letter from the President

It is my pleasure to welcome you to the West Wing of the White House. In 1902, President Theodore Roosevelt relocated his office from the second floor of the residence to this newly constructed building. The West Wing has expanded and undergone several renovations since then, but it has remained the official workplace of the President.

President Thomas Jefferson first opened the White House for public tours because he understood then, as we do now, that this house belongs to the American people. I am proud to continue his tradition. In our country, the halls of government are not reserved for a privileged few, and the President’s workplace should be no exception. Your visit today helps to fulfill my goal of creating the most open and accessible administration in American history.

Once again, welcome to the West Wing, and please accept my best wishes for an enjoyable tour.

This Is A Tour Of The West Wing (In Sign Language) 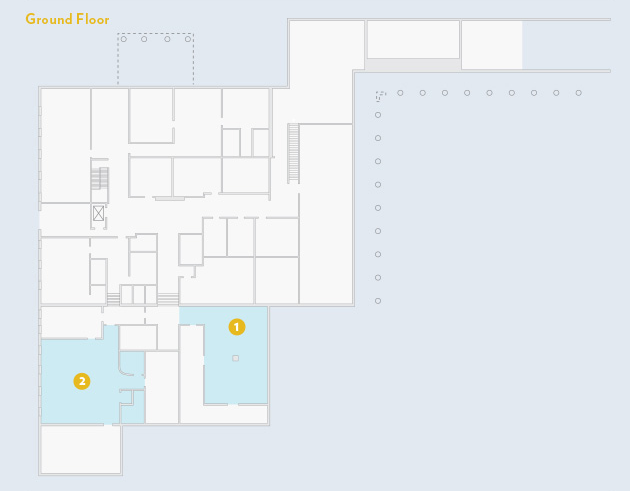 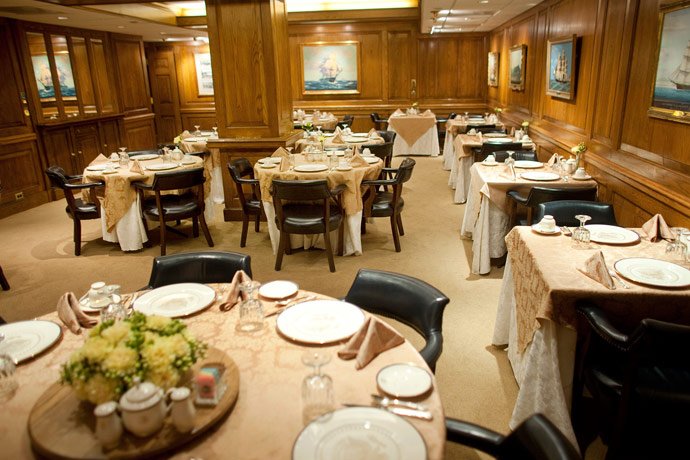 Navy Stewards have provided food service to the Commander in Chief since 1880. The modern White House Navy Mess was established under President Harry S. Truman in 1951. The Navy’s culinary specialists prepare and serve fine foods in the West Wing.

Seated reservations are available to senior officials including commissioned officers, Cabinet Secretaries, and their guests. Staff located in the West and East Wing can enjoy food made in the Navy Mess from a take-out window located adjacent to the dining hall. 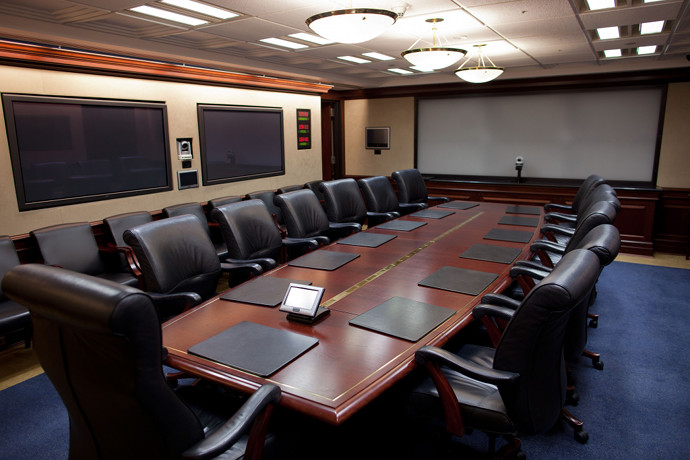 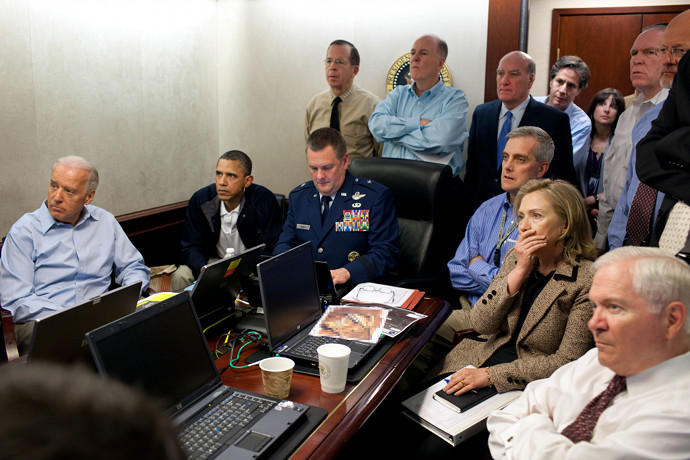 Months after being sworn into office, President John F. Kennedy was confronted with the Bay of Pigs Invasion in Cuba and insisted that intelligence information feed directly into the White House. The Situation Room was established in 1961 to meet President Kennedy’s request.

The current “Sit Room” is a 5,000-square-foot complex of rooms that is staffed 24 hours a day, seven days a week to monitor national and world intelligence information. Televisions for secure video conferences and technology can link the President to generals and world leaders around the globe. 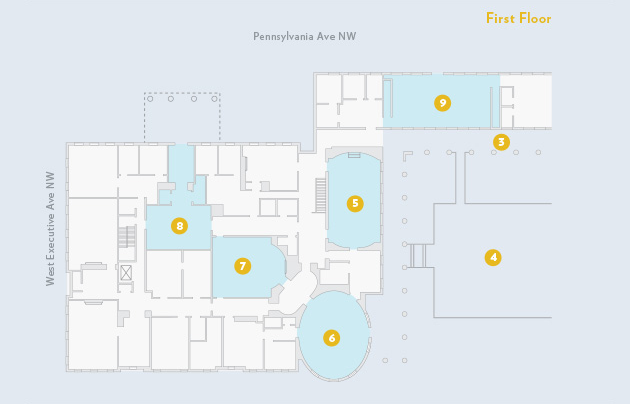 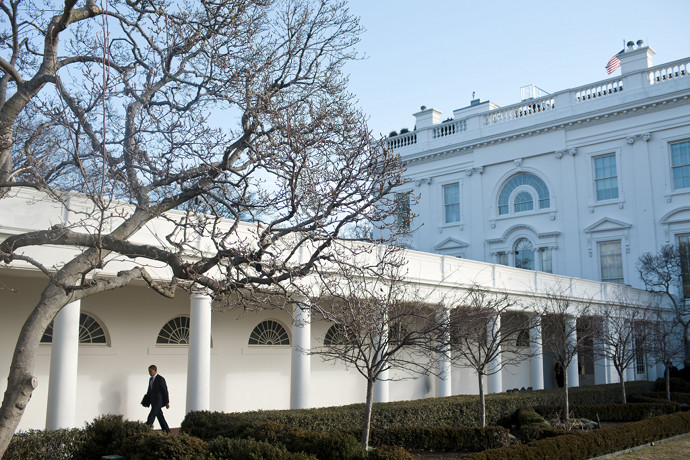 President Barack Obama walks along the Colonnade of the White House to the Oval Office, Feb. 14, 2011. (Official White House Photo by Lawrence Jackson)

Also known as the “45 second commute,” the West Colonnade was built for Thomas Jefferson to run alongside service spaces underneath the West Terrace, such as the ice house and storage rooms for coal and wood. The open columned walkway is now used by the President and his staff to travel between the West Wing and the Executive Residence. 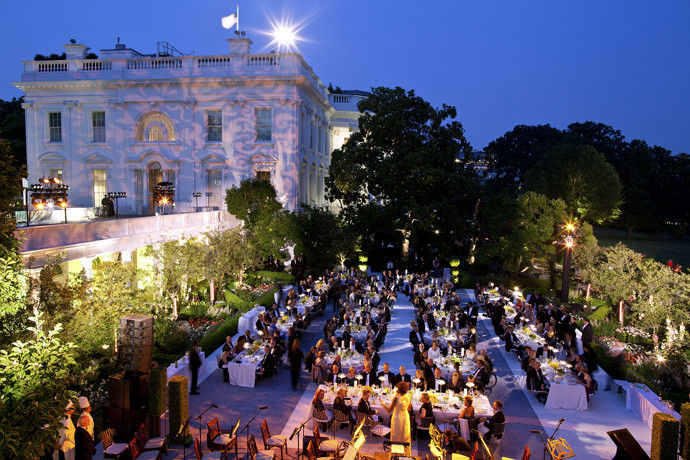 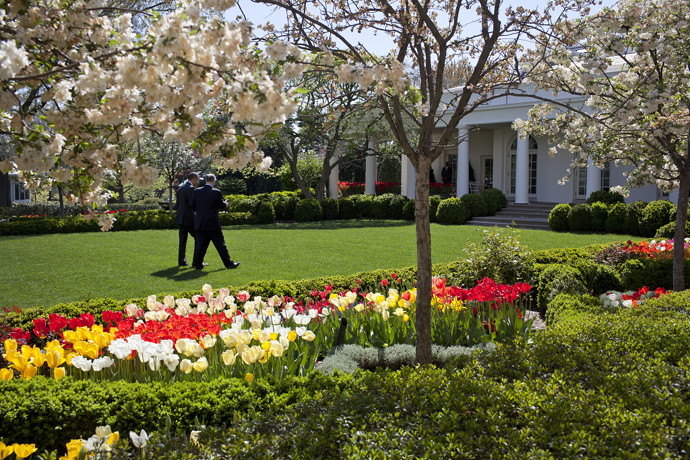 The Rose Garden was created by First Lady Ellen Axson Wilson in 1913. It was redesigned by First Lady Jacqueline Kennedy to serve as a Presidential reception area. President Nixon’s daughter, Tricia Nixon Cox, was married here in 1971. 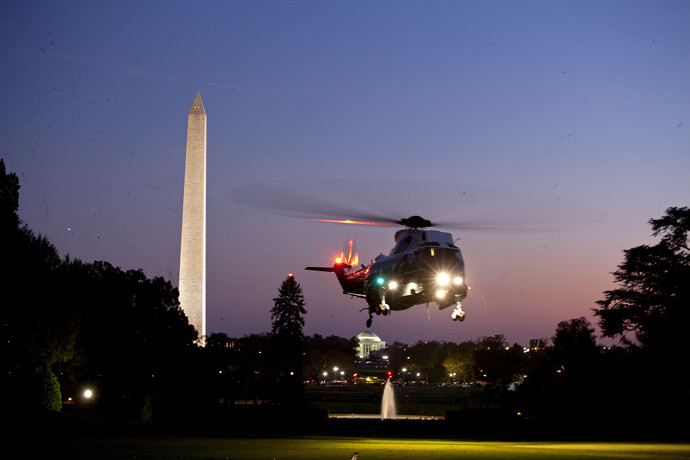 Marine One arrives at the South Lawn of the White House, Nov. 2, 2011. (Official White House Photo by Pete Souza)

The South Lawn is the site of the President’s Marine One arrivals and departures and includes the White House tennis court, putting green, and, as of March 2009, a kitchen garden. The White House Kitchen Garden includes over 50 kinds of vegetables, as well as berries, herbs, and a beehive. 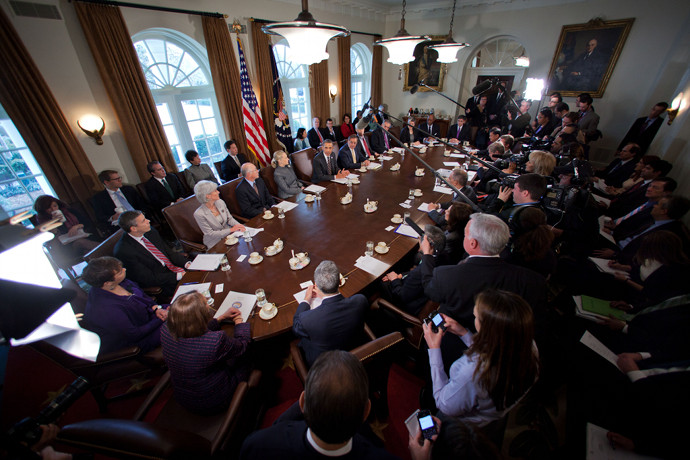 In the Cabinet Room, the President meets with the Cabinet Secretaries, members of Congress, the National Security Council, and foreign Heads of State on topics ranging from energy efficiency to national security.

When the President meets around the large mahogany table with the Cabinet Secretaries, each is assigned a chair based on the date their department was established with the oldest Cabinet departments seated closest to the center. The President sits at the center of the table with his back to the Rose Garden doors and opposite the Vice President.

As a reflection of their inspiration and governing style, Presidents select the portraits that hang in the Cabinet Room. In May 2009, President Obama chose Frank O. Salisbury’s portrait of President Harry S. Truman to join the portraits of George Washington, Thomas Jefferson, and Theodore Roosevelt already displayed in the room. 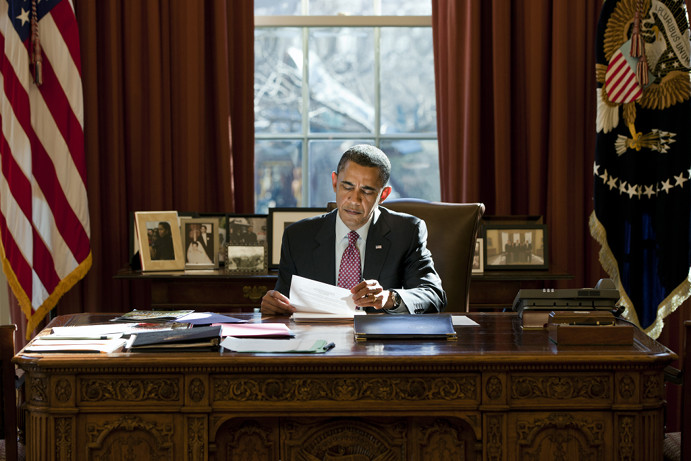 As the official office of the President and his primary place of work, the Oval Office provides the President with easy access to his senior advisors and the Executive Residence.

Beyond its distinctive shape, the most famous feature of the Oval Office is the Resolute Desk. Made from timbers of the H.M.S. Resolute – a British navy ship – it was presented by Queen Victoria to President Rutherford B. Hayes in 1880. Since then, the desk has been used by every President with the exception of Presidents Johnson, Nixon, and Ford.

Other notable furnishings in the Oval Office are the two paintings that flank the south windows. The Avenue in the Rain by Childe Hassam, 1917, depicts Fifth Avenue in New York City adorned with flags and banners in support of the Allied war effort during World War I. The Statue of Liberty by Norman Rockwell was prepared for the cover of The Saturday Evening Post to commemorate the Fourth of July in 1946.

In addition to covering the walls with hand-painted striped wallpaper, President Obama added a new oval-shaped rug, which is made of 25% recycled wool. This rug features the Presidential Seal in the center and five historical quotations of meaning by Martin Luther King, Jr. and Presidents Abraham Lincoln, Theodore Roosevelt, Franklin D. Roosevelt, and John F. Kennedy around its border. 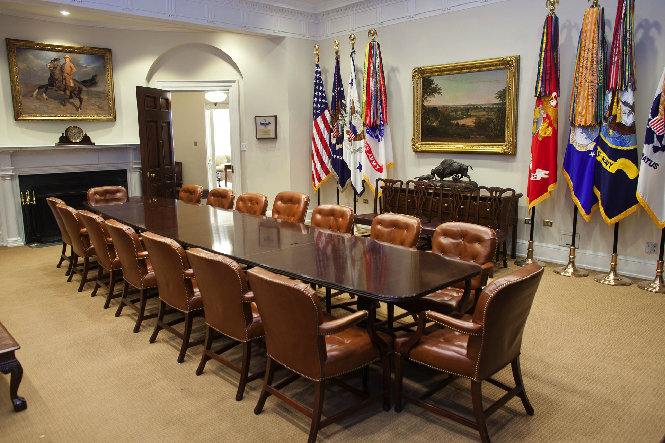 On the southeast wall hangs President Theodore Roosevelt’s Congressional Medal of Honor awarded posthumously on January 16, 2001 to honor his heroism in the Spanish-American War in 1898. To the left of the fireplace hangs President Theodore Roosevelt’s Nobel Peace Prize, awarded in 1906, for his mediation of the Russo-Japanese War peace settlement. This was the first Nobel Prize awarded to an American. 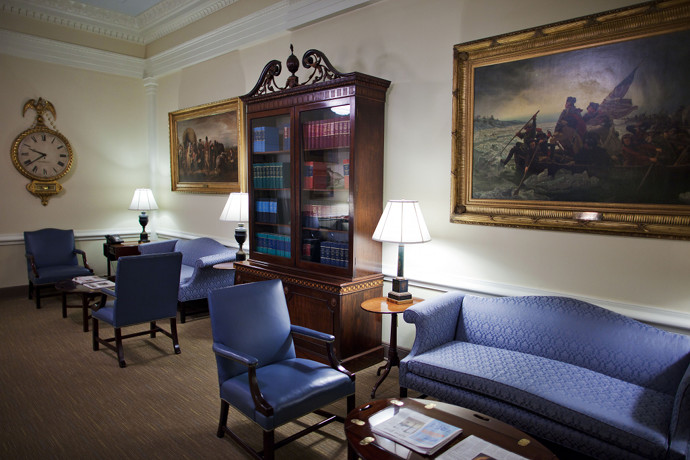 The West Wing lobby is the reception room for visitors of the President, Vice President, and White House staff. The current lobby was renovated by Richard Nixon in 1970 to provide a smaller, more intimate receiving space.

The large gilt clock was likely created from assembled parts (both old and new) to imitate an early nineteenth century clock, similar to those used in churches and other public buildings. The artist inscribed the name “Simon Willard,” an important clock maker at the turn of the nineteenth century.

The English-made mahogany bookcase (c.1770) is one of the oldest pieces of furniture in the White House collection.

Washington Crossing the Delaware (1851) by Emanuel Leutze and Eastman Johnson is a recreation of Leutze’s monumental life-size painting of the same subject. The painting has numerous historical inaccuracies, including the depiction of the American flag which was designed more than a year after the crossing took place.

Vernal Falls is an 1889 view of a waterfall in the Yosemite Valley in California by Thomas Hill. Belonging to the permanent White House collection, this painting complements the c.1881 view of Old Faithful Geyser in Yellowstone by Albert Bierstadt that hangs on the same west wall of the reception room. 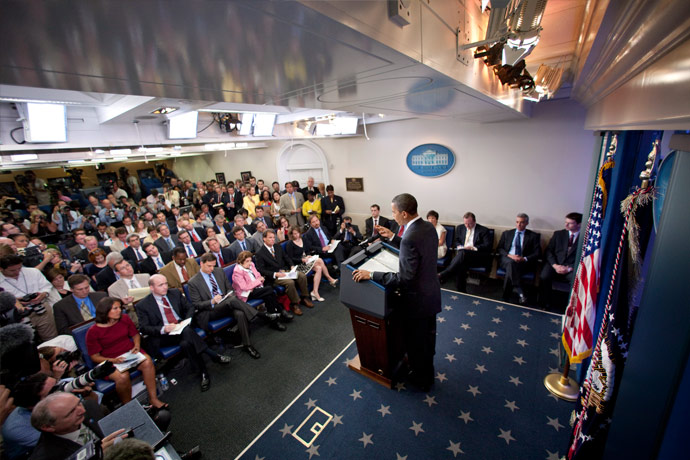 During the Nixon Administration, more space was required to accommodate the growing press corps. Therefore, in 1970, the briefing room was constructed on top of the emptied pool that was installed for President Franklin D. Roosevelt’s physical therapy.

In 2000, the James S. Brady Press Briefing Room was named in honor of former Press Secretary James Brady. He was shot and disabled during a 1981 assassination attempt on President Ronald Reagan. Today, the current White House press corps is made up of about 200 members. With just 49 chairs (arranged 7 by 7), it is up to the White House Correspondents Association to decide who gets these coveted seats. A plaque on each seat displays the name of the news organization to which it is assigned.

WW Tour styles - do not display