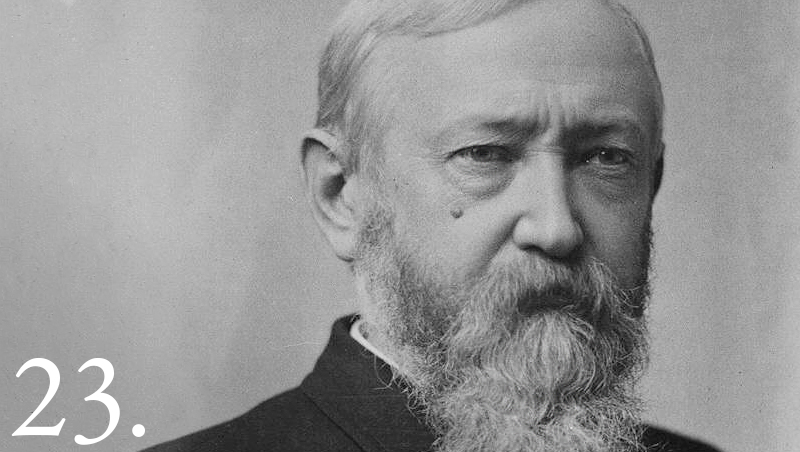 Benjamin Harrison was the 23rd President of the United States from 1889 to 1893, elected after conducting one of the first "front-porch" campaigns by delivering short speeches to delegations that visited him in Indianapolis.

Nominated for President on the eighth ballot at the 1888 Republican Convention, Benjamin Harrison conducted one of the first "front-porch" campaigns, delivering short speeches to delegations that visited him in Indianapolis. As he was only 5 feet, 6 inches tall, Democrats called him "Little Ben"; Republicans replied that he was big enough to wear the hat of his grandfather, "Old Tippecanoe."

Born in 1833 on a farm by the Ohio River below Cincinnati, Harrison attended Miami University in Ohio and read law in Cincinnati. He moved to Indianapolis, where he practiced law and campaigned for the Republican Party. He married Caroline Lavinia Scott in 1853. After the Civil War--he was Colonel of the 70th Volunteer Infantry--Harrison became a pillar of Indianapolis, enhancing his reputation as a brilliant lawyer.

The Democrats defeated him for Governor of Indiana in 1876 by unfairly stigmatizing him as "Kid Gloves" Harrison. In the 1880's he served in the United States Senate, where he championed Indians. homesteaders, and Civil War veterans.

In the Presidential election, Harrison received 100,000 fewer popular votes than Cleveland, but carried the Electoral College 233 to 168. Although Harrison had made no political bargains, his supporters had given innumerable pledges upon his behalf.

When Boss Matt Quay of Pennsylvania heard that Harrison ascribed his narrow victory to Providence, Quay exclaimed that Harrison would never know "how close a number of men were compelled to approach... the penitentiary to make him President."

Harrison was proud of the vigorous foreign policy which he helped shape. The first Pan American Congress met in Washington in 1889, establishing an information center which later became the Pan American Union. At the end of his administration Harrison submitted to the Senate a treaty to annex Hawaii; to his disappointment, President Cleveland later withdrew it.

Substantial appropriation bills were signed by Harrison for internal improvements, naval expansion, and subsidies for steamship lines. For the first time except in war, Congress appropriated a billion dollars. When critics attacked "the billion-dollar Congress," Speaker Thomas B. Reed replied, "This is a billion-dollar country." President Harrison also signed the Sherman Anti-Trust Act "to protect trade and commerce against unlawful restraints and monopolies," the first Federal act attempting to regulate trusts.

The most perplexing domestic problem Harrison faced was the tariff issue. The high tariff rates in effect had created a surplus of money in the Treasury. Low-tariff advocates argued that the surplus was hurting business. Republican leaders in Congress successfully met the challenge. Representative William McKinley and Senator Nelson W. Aldrich framed a still higher tariff bill; some rates were intentionally prohibitive.

Harrison tried to make the tariff more acceptable by writing in reciprocity provisions. To cope with the Treasury surplus, the tariff was removed from imported raw sugar; sugar growers within the United States were given two cents a pound bounty on their production.

Long before the end of the Harrison Administration, the Treasury surplus had evaporated, and prosperity seemed about to disappear as well. Congressional elections in 1890 went stingingly against the Republicans, and party leaders decided to abandon President Harrison although he had cooperated with Congress on party legislation. Nevertheless, his party renominated him in 1892, but he was defeated by Cleveland.

After he left office, Harrison returned to Indianapolis, and married the widowed Mrs. Mary Dimmick in 1896. A dignified elder statesman, he died in 1901.