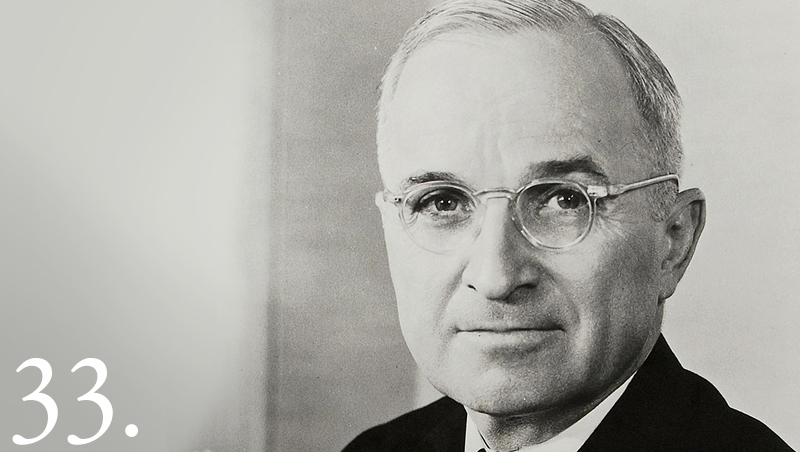 During his few weeks as Vice President, Harry Truman scarcely saw President Franklin Roosevelt, and received no briefing on the development of the atomic bomb or the unfolding difficulties with Soviet Russia. Suddenly these and a host of other wartime problems became Truman's to solve when, on April 12, 1945, he became America's 33rd President.

During his few weeks as Vice President, Harry S. Truman scarcely saw President Roosevelt, and received no briefing on the development of the atomic bomb or the unfolding difficulties with Soviet Russia. Suddenly these and a host of other wartime problems became Truman's to solve when, on April 12, 1945, he became President. He told reporters, "I felt like the moon, the stars, and all the planets had fallen on me."

Truman was born in Lamar, Missouri, in 1884. He grew up in Independence, and for 12 years prospered as a Missouri farmer.

He went to France during World War I as a captain in the Field Artillery. Returning, he married Elizabeth Virginia Wallace, and opened a haberdashery in Kansas City.

Active in the Democratic Party, Truman was elected a judge of the Jackson County Court (an administrative position) in 1922. He became a Senator in 1934. During World War II he headed the Senate war investigating committee, checking into waste and corruption and saving perhaps as much as 15 billion dollars.

As President, Truman made some of the most crucial decisions in history. Soon after V-E Day, the war against Japan had reached its final stage. An urgent plea to Japan to surrender was rejected. Truman, after consultations with his advisers, ordered atomic bombs dropped on cities devoted to war work. Two were Hiroshima and Nagasaki. Japanese surrender quickly followed.

In June 1945 Truman witnessed the signing of the charter of the United Nations, hopefully established to preserve peace.

Thus far, he had followed his predecessor's policies, but he soon developed his own. He presented to Congress a 21-point program, proposing the expansion of Social Security, a full-employment program, a permanent Fair Employment Practices Act, and public housing and slum clearance. The program, Truman wrote, "symbolizes for me my assumption of the office of President in my own right." It became known as the Fair Deal.

Dangers and crises marked the foreign scene as Truman campaigned successfully in 1948. In foreign affairs he was already providing his most effective leadership.

In 1947 as the Soviet Union pressured Turkey and, through guerrillas, threatened to take over Greece, he asked Congress to aid the two countries, enunciating the program that bears his name--the Truman Doctrine. The Marshall Plan, named for his Secretary of State, stimulated spectacular economic recovery in war-torn western Europe.

When the Russians blockaded the western sectors of Berlin in 1948, Truman created a massive airlift to supply Berliners until the Russians backed down. Meanwhile, he was negotiating a military alliance to protect Western nations, the North Atlantic Treaty Organization, established in 1949.

In June 1950, when the Communist government of North Korea attacked South Korea, Truman conferred promptly with his military advisers. There was, he wrote, "complete, almost unspoken acceptance on the part of everyone that whatever had to be done to meet this aggression had to be done. There was no suggestion from anyone that either the United Nations or the United States could back away from it."

A long, discouraging struggle ensued as U.N. forces held a line above the old boundary of South Korea. Truman kept the war a limited one, rather than risk a major conflict with China and perhaps Russia.

Deciding not to run again, he retired to Independence; at age 88, he died December 26, 1972, after a stubborn fight for life.