“We have a chance to improve the lives of not just millions, but billions of people on this planet through the research that's done in this BRAIN Initiative alone. But it's going to require a serious effort, a sustained effort. And it’s going to require us as a country to embody and embrace that spirit of discovery that is what made America, America.”
- President Obama on April 2, 2013

About the BRAIN Initiative

The Initiative Kicks Off 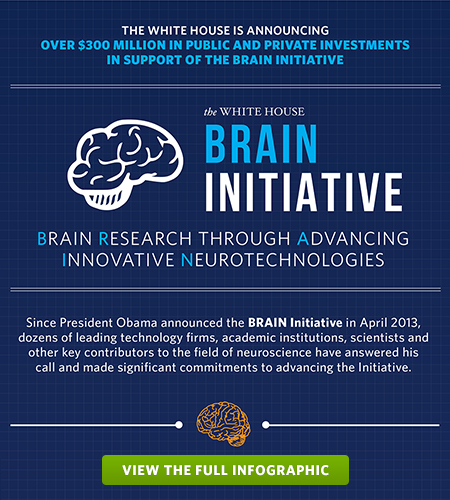 In April 2013, the President announced the launch of the BRAIN (Brain Research through Advancing Innovative Neurotechnologies) Initiative® – a bold, new initiative focused on revolutionizing our understanding of the human brain.

The BRAIN Initiative is one of the Administration’s “Grand Challenges” – ambitious but achievable goals that require advances in science and technology. Since the President announced the BRAIN Initiative, dozens of leading technology firms, academic institutions, scientists, and other key contributors to the field of neuroscience have answered his call and made significant commitments to advancing the initiative. Top neuroscientists also have developed a 12-year research strategy for the National Institutes of Health (NIH) to achieve the goals of the initiative.

“The human brain is the most complicated biological structure in the known universe. We’ve only just scratched the surface in understanding how it works – or, unfortunately, doesn’t quite work when disorders and disease occur… This is just the beginning of a 12-year journey and we’re excited to be starting the ride.”

The BRAIN Initiative has the potential to do for neuroscience what the Human Genome Project did for genomics by supporting the development and application of innovative technologies that can create a dynamic understanding of brain function. It aims to help researchers uncover the mysteries of brain disorders, such as Alzheimer’s and Parkinson’s diseases, depression, and traumatic brain injury (TBI).

The initiative will accelerate the development and application of new technologies that will enable researchers to produce dynamic pictures of the brain that show how individual brain cells and complex neural circuits interact at the speed of thought. These technologies will open new doors to explore how the brain records, processes, uses, stores, and retrieves vast quantities of information, and shed light on the complex links between brain function and behavior.

In the last decade, scientists have made a number of landmark discoveries that now create the opportunity to unlock the mysteries of the brain — including the sequencing of the human genome, the development of new tools for mapping neuronal connections, the increasing resolution of imaging technologies, the maturation of nanoscience, and the rise of biological engineering.

These breakthroughs have paved the way for unprecedented collaboration and discovery across scientific fields. For instance, by combining advanced genetic and optical techniques, scientists can now use pulses of light to determine how specific cell activities in the brain affect behavior. Similarly, through the integration of neuroscience and physics, researchers can now use high-resolution imaging technologies to observe how the brain is structurally and functionally connected in living humans.

While these technological innovations have contributed substantially to our expanding knowledge of the brain, significant breakthroughs in how we treat neurological and psychiatric disease will require a new generation of tools to enable researchers to record signals from brain cells in much greater numbers and at even faster speeds. That's where the BRAIN Initiative comes in.

Learn more about major developments and milestones of the BRAIN Initiative here:

February 2015 | White House Blog Post: Investing in Research to Help Unlock the Mysteries of the BRAIN

September 2014 | Fact Sheet: Over $300 Million in Support of the President’s BRAIN Initiative

Learn more about Federal agencies investing in the BRAIN Initiative, including media updates and information on their grant awards:

The header image is from: cbs.fas.harvard.edu/science/connectome-project/brainbow

Do you have ideas or comments on the BRAIN Initiative? Will you or someone you know benefit from this research? If so, share your idea or story here:

This webform is now closed.