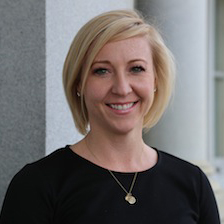 Anita Breckenridge currently serves as President Obama’s Deputy Chief of Staff for Operations. In this position, which Ms. Breckenridge has held since May 2014, she oversees the President’s schedule, physical and IT operations on the White House’s 18-acre campus, and personnel appointments across the administration. Prior to assuming this role, Ms. Breckenridge was the president’s personal assistant, a position she held from May 2011 until her appointment in the chief of staff’s office. Before joining the White House, Ms. Breckenridge served as chief of staff at the National Endowment for the Arts, where she worked since the start of the administration.

Ms. Breckenridge began working for President Obama during his first race for the United States Senate in 2003. After he was elected, then-Senator Obama appointed her Downstate Director and tasked her with managing his network of regional offices in Downstate Illinois. When he declared himself a candidate for president in 2007 she helped run the announcement of his campaign in Springfield, Illinois.

Ms. Breckenridge earned her bachelor’s degree at the University of Arizona. A native of Kenilworth, IL, she now lives in Washington, D.C. with her husband Russ.