February 24, 2009 at 9:55 AM ET by Macon Phillips
Twitter Facebook Email
Bringing relief to the battered region of Darfur is a top priority for the administration, the President and Vice President assured the actor and activist George Clooney last night.
In separate meetings with President Obama and Vice President Biden, Clooney told them what he saw on his recent trip to Eastern Chad.
"We saw an awful lot of fear," Clooney told Larry King last night of his visit to the region. "There was [also] a tremendous amount of hope."
After six years of fighting, it’s estimated that 300,000 people have been killed and more than 2.7 million displaced in the Darfur region of Sudan.
Learn more about the joint United Nations-African Union mission there. 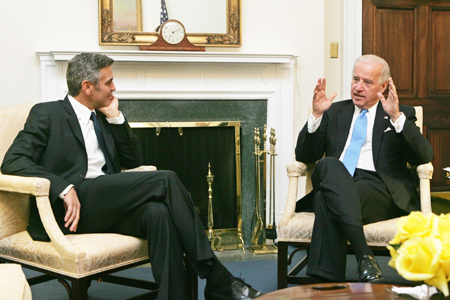