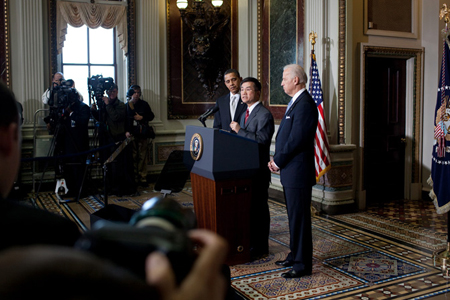 
"Gary knows the American Dream. He's lived it. And that's why he shares my commitment to do whatever it takes to keep it alive in our time," President Obama said this morning in announcing former Washington governor Gary Locke as his choice to lead the Commerce Department.
"It is the task of the Department of Commerce to help create conditions in which our workers can prosper, our businesses can thrive, and our economy can grow," he said. "That's what Gary did in Washington state, convincing businesses to set up shop and create the jobs of the 21st century -- jobs in science and technology; agriculture and energy -- jobs that pay well and can't be shipped overseas. That's what he did by establishing favorable markets abroad where Washington state's businesses could sell their products. That's what he did by unleashing powerful partnerships between state and local governments, between labor and business -- all with an eye toward prosperity and progress for all those in his state who had dreams of their own."
"The Department of Commerce plays a critical role in nurturing innovation, expanding global markets, protecting and managing our ocean fisheries, and fostering economic growth," Secretary-designate Locke said. "The Department of Commerce can and will help create the jobs and the economic vitality our nation needs."
He told the story of his family's journey to the United States and their struggle for success, and offered it is an example of American ingenuity and determination.
"My family's story is America's story," Locke said. "Our story is just one of hundreds of millions since the birth of our nation, of people coming from every part of the world in pursuit of the American Dream of freedom, hope and opportunity. In hard times, Americans have rallied together, sacrificed and even given their lives for our country, because they believe in the essential goodness and promise of America."