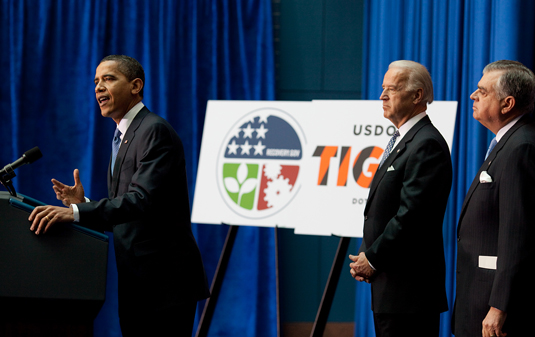 President Barack Obama addresses a crowd gathered at the Department of Transportation in Washington, D.C., to discuss infrastructure spending as part of the American Recovery and Investment Act, as Vice President Joe Biden and Transportation Secretary Ray LaHood listen.

"Thanks in large part to Joe Biden....and because of all the governors and mayors, county and city officials who are helping implement this plan, I can say that 14 days after I signed our Recovery Act into law, we are seeing shovels hit the ground," President Obama said in remarks at the Department of Transportation today, announcing the apportionment of $26.6 billion of a total $28 billion in infrastructure spending.

"Two weeks ago, I signed into law the American Recovery and Reinvestment Act, the most sweeping economic recovery plan in history," he said. "And already, its impact is being felt across this nation. Hardworking families can now worry a little less about next month's bills because of the tax cut they'll soon find in the mail. Renewable energy companies that were once downsizing are now finding ways to expand. And transportation projects that were once on hold are now starting up again -- as part of the largest new investment in America's infrastructure since President Eisenhower built the Interstate Highway System."

Just prior to the President's remarks, Secretary LaHood announced the first project  will be in Montgomery County, Md., on State Route 650. Learn more about how the funds are going to be spent, including state-by-state and urban-suburban-rural breakdowns, at Recovery.gov.