The Finest Military in the History of the World

October 26, 2009 at 7:27 PM ET by Jesse Lee
Twitter Facebook Email
Summary:
Speaking at Naval Air Station Jacksonville in Florida, the President honored fourteen Americans killed in a crash in Afghanistan, the generations that have served in Jacksonville, and our servicemen and women all over the world. 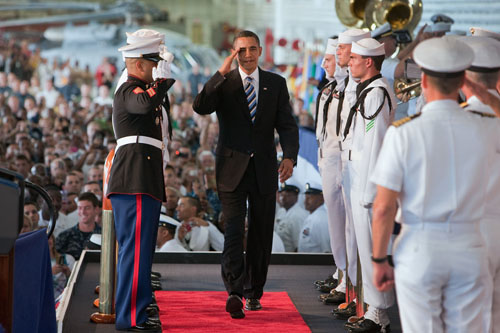 Speaking today at Naval Air Station Jacksonville in Florida, the President honored the fourteen Americans killed in the crash in Afghanistan this morning, the generations that have served in Jacksonville, and our servicemen and women all over the world:

Keeping you strong takes something else -- a country that never forgets this simple truth.  It's not the remarkable platforms that give the United States our military superiority -- although you've got some pretty impressive aircraft here, I got to admit.  It's not the sophisticated technologies that make us the most advanced in the world -- although you do represent the future of naval aviation.

We're reminded of this again with today's helicopter crashes in Afghanistan.  Fourteen Americans gave their lives.  And our prayers are with these service members, their civilian colleagues, and the families who loved them.

And while no words can ease the ache in their hearts today, may they find some comfort in knowing this:  Like all those who give their lives in service to America, they were doing their duty and they were doing this nation proud.

They were willing to risk their lives, in this case, to prevent Afghanistan from once again becoming a safe haven for al Qaeda and its extremist allies.  And today, they gave their lives, that last full measure of devotion, to protect ours.

Now, it is our duty as a nation to keep their memory alive in our hearts and to carry on their work.  To take care of their families.  To keep our country safe.  To stand up for the values we hold dear and the freedom they defended.  That's what they dedicated their lives to.  And that is what we must do as well.

So I say to you and all who serve:  Of all the privileges I have as President, I have no greater honor than serving as your Commander-in-Chief.  You inspire me.  And I'm here today to deliver a simple message -- a message of thanks to you and your families.

Being here, you join a long, unbroken line of service at Jacksonville -- from the naval aviators from World War II to Korea to Vietnam, among them a great patriot named John McCain.  You embody that sailor's creed, the "spirit of the Navy and all who have gone before" -- Honor, Courage, Commitment. 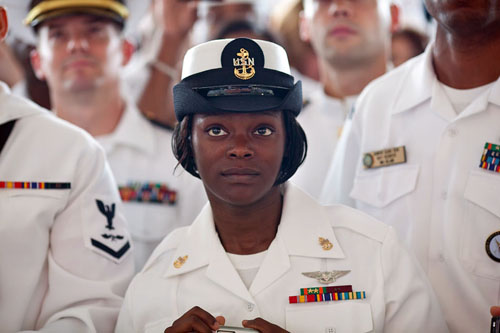 The President also pledged to hold up his end of the bargain:

And while I will never hesitate to use force to protect the American people or our vital interests, I also promise you this -- and this is very important as we consider our next steps in Afghanistan:  I will never rush the solemn decision of sending you into harm's way.  I won't risk your lives unless it is absolutely necessary.  (Applause.)  And if it is necessary, we will back you up to the hilt.  Because you deserve the strategy, the clear mission, and the defined goals as well as the equipment and support that you need to get the job done.  We are not going to have a situation in which you are not fully supported back here at home.  That is a promise that I will always make to you.  (Applause.)

Now, as you meet your missions around the world, we will take care of your families here at home.  That's why Michelle has been visiting bases across the country.  That's why the Recovery Act is funding projects like improvements to your hospital and a new child development center at Mayport.  It's why we're increasing your pay -- (applause) -- increasing childcare, helping families deal with the stress and separation of war.

And finally, we pledge to be there when you come home.  We're improving care for our wounded warriors, especially those with post-traumatic stress and traumatic brain injuries.  We're funding the Post-9/11 GI Bill to give you and your families the chance to pursue your dreams.  (Applause.)  And we are making the biggest commitment to our veterans -- the largest percentage increase in the VA budget, even when we've got very difficult times fiscally -- in more than 30 years.

Now these are the commitments I make to you; the obligations that your country is honor-bound to uphold.  Because you've always taken care of America, and America must take care of you -- always. 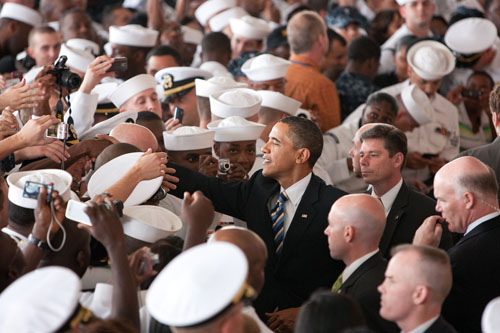