Today the House reaches another major milestone in the effort to pass health insurance reform, and effort decades in the making.

Predictably, opponents of reform are taking their misleading claims to new heights.  For example, they claim that CEA Chair Christina Romer has said that reform would cost millions of jobs.  This is flatly false, as demonstrated by the independent watchdog Politifact and Romer's own statement.

Opponents of reform have also manufactured a chart attempting to depict reform as some sort of maze of bureaucracy.  This is also false.  Here is a chart that accurately reflects the President's plan: 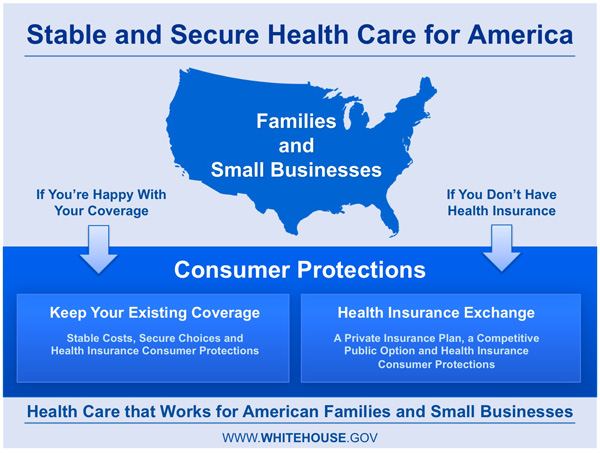 This is not a time for such deception, however predictable it may be.  As the President made clear in remarks after his meeting on Capitol Hill today, this vote marks an important moment in history:

Good afternoon, everybody.  I just want to say a few words about the landmark vote that the House of Representatives is poised to take today -- a vote that can bring us one step closer to making real the promise of quality, affordable health care for the American people.

For the better part of a year now, members of the House and the Senate have been working diligently and constructively to craft legislation that will benefit millions of American families and millions of American businesses who urgently need it.  For the first time ever, they've passed bills through every single committee responsible for reform.  They've brought us closer than we have ever been to passing health insurance reform on behalf of the American people.

Now is the time to finish the job.  The bill that the House has produced will provide stability and security for Americans who have insurance; quality, affordable options for those who don't; and lower costs for American families and American businesses.  And as I've insisted from the beginning, it is a bill that is fully paid for and will actually reduce our long-term federal deficit.

This bill is change that the American people urgently need. Don't just take my word for it.  Consider the national groups who've come out in support of this bill on behalf of their members:  The Consumers Union supports it because it will create -- and I quote -- "a more secure, affordable health care system for the American people."

The American Medical Association and the American Nurses Association support it on behalf of doctors and nurses and medical professionals who know firsthand what's broken in our current system, and who see what happens when their patients can't get the care they need because of insurance industry bureaucracies.

The National Farmers Union supports this bill because it will control costs for farmers and ranchers, and address the unique challenges rural Americans face when it comes to receiving quality care.

And the AARP supports it because it will achieve the goal for which the AARP has been fighting for decades -- reducing the cost of health care, expanding coverage for America's seniors, and strengthening Medicare for the long haul.

Now, no bill can ever contain everything that everybody wants, or please every constituency and every district.  That's an impossible task.  But what is possible, what's in our grasp right now is the chance to prevent a future where every day 14,000 Americans continue to lose their health insurance, and every year 18,000 Americans die because they don't have it; a future where crushing costs keep small businesses from succeeding and big businesses from competing in the global economy; a future where countless dreams are deferred or scaled back because of a broken system we could have fixed when we had the chance.

What we can do right now is choose a better future and pass a bill that brings us to the very cusp of building what so many generations of Americans have sought to build -- a better health care system for this country.

Millions of Americans are watching right now.  Their families and their businesses are counting on us.  After all, this is why they sent us here, to finally confront the challenges that Washington had been putting off for decades -- to make their lives better, to leave this country stronger than we found it.

I just came from the Hill where I talked to the members of Congress there, and I reminded them that opportunities like this come around maybe once in a generation.  Most public servants pass through their entire careers without a chance to make as important a difference in the lives of their constituents and the life of this country.  This is their moment, this is our moment, to live up to the trust that the American people have placed in us -- even when it's hard; especially when it's hard.  This is our moment to deliver.

I urge members of Congress to rise to this moment.  Answer the call of history, and vote yes for health insurance reform for America.