In Tokyo, Our Common Future

November 14, 2009 at 1:51 PM ET by Jesse Lee
Twitter Facebook Email
Summary:
The President gives a sweeping speech setting the agenda for his trip through Asia and his vision for our common future.

Read translations of the President's speech in Chinese, Indonesian, Japanese or Korean.

For some, our relationship with the nations of Asia may not always be at the forefront of their minds.  The President's sweeping speech at Suntory Hall in Tokyo was a powerful argument for why that should not be so.  Indeed the President noted that to the extent this attitude has been reflected in our government's neglect of the emerging multilateral organizations in the region, this mistake would not be made again: "I know that the United States has been disengaged from many of these organizations in recent years. So let me be clear:  Those days have passed."  The rapid pace of development on virtually every front in Asia creates an environment of almost endless opportunity for collaboration and innovation through our ties. 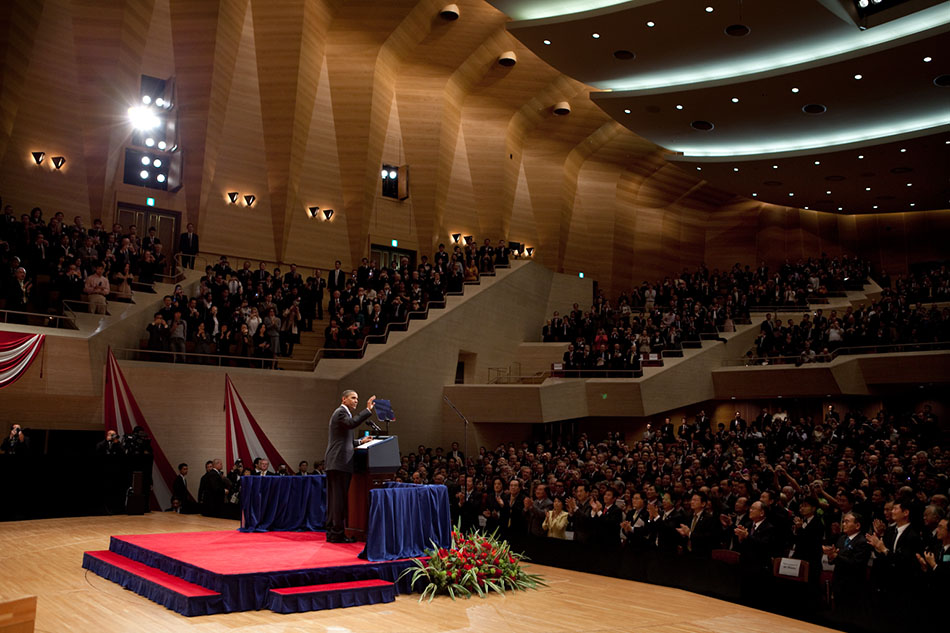 The President began his speech by praising the famous hospitality of Japan and speaking of his childhood memories of visiting the country. He made clear that for all of the diverse countries and cultures in the region, "our efforts in the Asia Pacific will be rooted, in no small measure, through an enduring and revitalized alliance between the United States and Japan."  He went on to discuss what is at stake with all of those alliances:

So I want everyone to know, and I want everybody in America to know, that we have a stake in the future of this region, because what happens here has a direct effect on our lives at home.  This is where we engage in much of our commerce and buy many of our goods.  And this is where we can export more of our own products and create jobs back home in the process.  This is a place where the risk of a nuclear arms race threatens the security of the wider world, and where extremists who defile a great religion plan attacks on both our continents.  And there can be no solution to our energy security and our climate challenge without the rising powers and developing nations of the Asia Pacific.

The relationship that has been the subject of perhaps more speculation than any other as this trip began was America's relationship with China.  In this speech the President spelled out his views with clarity:

We look to rising powers with the view that in the 21st century, the national security and economic growth of one country need not come at the expense of another.  I know there are many who question how the United States perceives China's emergence.  But as I have said, in an interconnected world, power does not need to be a zero-sum game, and nations need not fear the success of another.  Cultivating spheres of cooperation -- not competing spheres of influence -- will lead to progress in the Asia Pacific.  (Applause.)

Now, as with any nation, America will approach China with a focus on our interests.  And it's precisely for this reason that it is important to pursue pragmatic cooperation with China on issues of mutual concern, because no one nation can meet the challenges of the 21st century alone, and the United States and China will both be better off when we are able to meet them together.  That's why we welcome China's effort to play a greater role on the world stage -- a role in which their growing economy is joined by growing responsibility.  China's partnership has proved critical in our effort to jumpstart economic recovery.  China has promoted security and stability in Afghanistan and Pakistan.  And it is now committed to the global nonproliferation regime, and supporting the pursuit of denuclearization of the Korean Peninsula.

So the United States does not seek to contain China, nor does a deeper relationship with China mean a weakening of our bilateral alliances.  On the contrary, the rise of a strong, prosperous China can be a source of strength for the community of nations.

And so in Beijing and beyond, we will work to deepen our strategic and economic dialogue, and improve communication between our militaries.  Of course, we will not agree on every issue, and the United States will never waver in speaking up for the fundamental values that we hold dear -- and that includes respect for the religion and cultures of all people -- because support for human rights and human dignity is ingrained in America.  But we can move these discussions forward in a spirit of partnership rather than rancor. 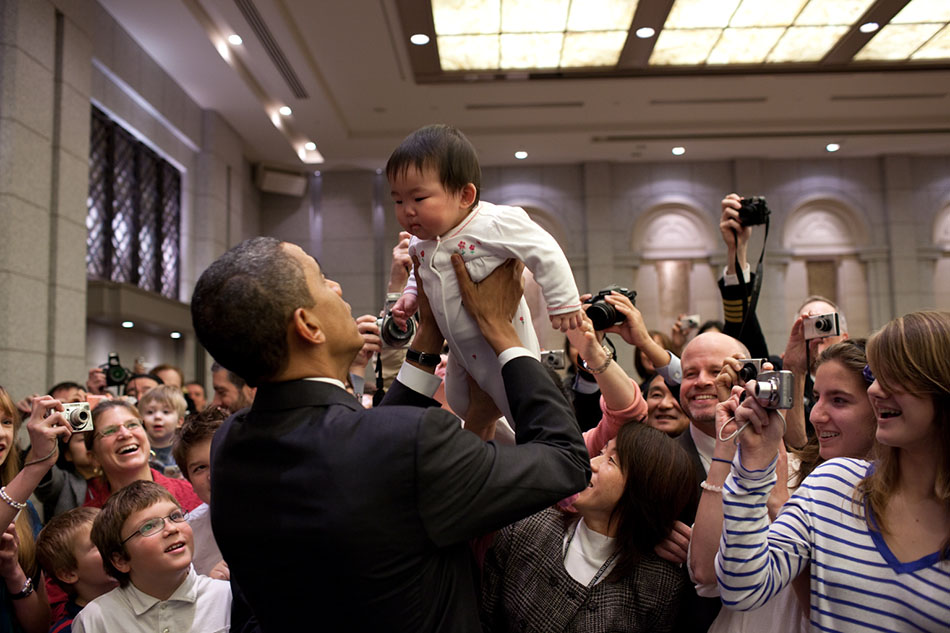 The President also reflected on progress and the road ahead in several core issues.

Now that we are on the brink of economic recovery, we must also ensure that it can be sustained.  We simply cannot return to the same cycles of boom and bust that led to a global recession. We can't follow the same policies that led to such imbalanced growth.  One of the important lessons this recession has taught us is the limits of depending primarily on American consumers and Asian exports to drive growth -- because when Americans found themselves too heavily in debt or lost their jobs and were out of work, demand for Asian goods plummeted.  When demand fell sharply, exports from this region fell sharply.  Since the economies of this region are so dependent on exports, they stopped growing.  And the global recession only deepened.

So we have now reached one of those rare inflection points in history where we have the opportunity to take a different path.  And that must begin with the G20 pledge that we made in Pittsburgh to pursue a new strategy for balanced economic growth.

On climate change and sustainable development:

Working in partnership, this is how we can sustain this recovery and advance our common prosperity.  But it's not enough to pursue growth that is balanced.  We also need growth that is sustainable -- for our planet and the future generations that will live here.

Already, the United States has taken more steps to combat climate change in 10 months than we have in our recent history -- (applause) -- by embracing the latest science, by investing in new energy, by raising efficiency standards, forging new partnerships, and engaging in international climate negotiations. In short, America knows there is more work to do -- but we are meeting our responsibility, and will continue to do so.

And that includes striving for success in Copenhagen.  I have no illusions that this will be easy, but the contours of a way forward are clear.  All nations must accept their responsibility.  Those nations, like my own, who have been the leading emitters must have clear reduction targets.  Developing countries will need to take substantial actions to curb their emissions, aided by finance and technology.  And there must be transparency and accountability for domestic actions.

And on nuclear proliferation:

To meet our responsibilities and to move forward with the agenda I laid out in Prague, we have passed, with the help of Japan, a unanimous U.N. Security Council resolution embracing this international effort.  We are pursuing a new agreement with Russia to reduce our nuclear stockpiles.  We will work to ratify and bring into force the test ban treaty.  (Applause.)  And next year at our Nuclear Security Summit, we will advance our goal of securing all the world's vulnerable nuclear materials within four years.

Now, as I've said before, strengthening the global nonproliferation regime is not about singling out any individual nations.  It's about all nations living up to their responsibilities.  That includes the Islamic Republic of Iran.  And it includes North Korea.

The President closed speaking of human rights, noting the abuses in Burma in particular, but noting that in Asia more than perhaps anywhere else, the world has seen how quickly hope can spring from despair:

But we know that there's still work to be done -- so that new breakthroughs in science and technology can lead to jobs on both sides of the Pacific, and security from a warming planet; so that we can reverse the spread of deadly weapons, and -- on a divided peninsula -- the people of South can be freed from fear, and those in the North can live free from want; so that a young girl can be valued not for her body but for her mind; and so that young people everywhere can go as far as their talent and their drive and their choices will take them.

None of this will come easy, nor without setback or struggle.  But at this moment of renewal -- in this land of miracles -- history tells us it is possible.  This is the --America's agenda.  This is the purpose of our partnership with Japan, and with the nations and peoples of this region.  And there must be no doubt:  As America's first Pacific President, I promise you that this Pacific nation will strengthen and sustain our leadership in this vitally important part of the world. 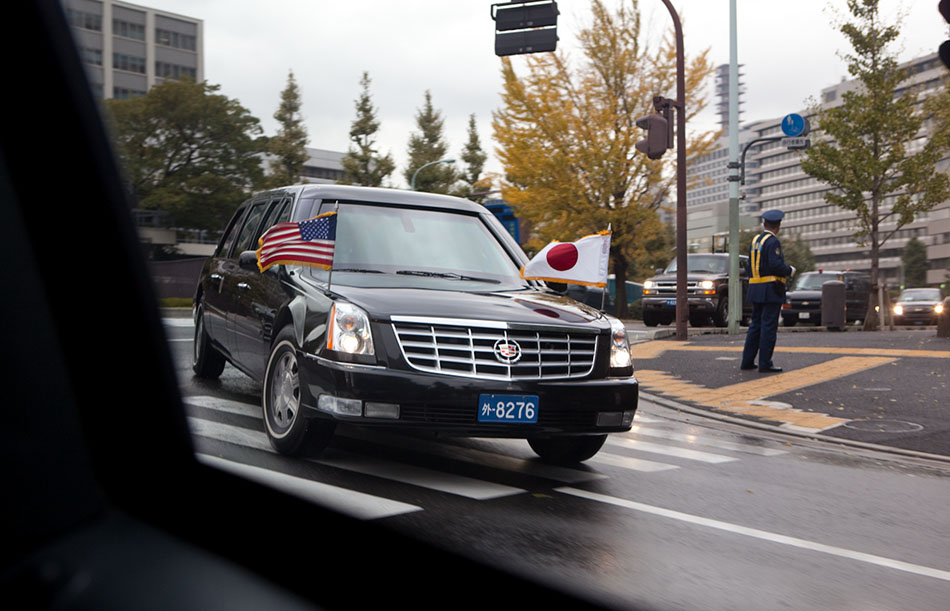