The Big News from the Retail Sales Report

November 16, 2009 at 6:44 PM ET by Austan Goolsbee
Twitter Facebook Email
Summary:
Austan Goolsbee of the Council of Economic Advisers explains yet another positive sign for the economy that emerged today.

The big news from the retail sales report was that sales rose again and even more than expected--1.4%, which was a full half point more than the consensus forecast.

The core retail spending--the stuff that tends to give a steadier picture and not fluctuate around a lot--rose for the third straight month.  And if you compared the core sales in October 2009 to October last year, it was the first year-over-year increase in 8 months.  In fact, the three-month gain ending in October was the strongest since June 2008.

This string of gains means that consumer spending is on track to post another gain in the fourth quarter of the year.  From mid 2007 to mid 2009, we had measly growth or outright declines in consumer spending so this is a welcome sign of the beginnings of recovery.

One last thing worth noting in this retail sales report is the fact that consumer spending on motor vehicles posted a big increase.  The report last month showed a decline in sales as the Cash-for-Clunkers program ended.  Some critics argued that the perceived recovery of the economy was only a temporary blip due to people shifting their car purchases forward and sales now would be lower for an extended period.  These data suggest that didn't happen.  They confirm what the private industry sales data already documented. The sales of motor vehicles in October are up to an annual rate that actually exceeds the rate in the eight months before cash-for-clunkers began.

The President's focus is on recovery and getting people back to work.  Turning the economy around is the necessary first step for job creation.  This report suggests the recovery effort may be picking up steam. 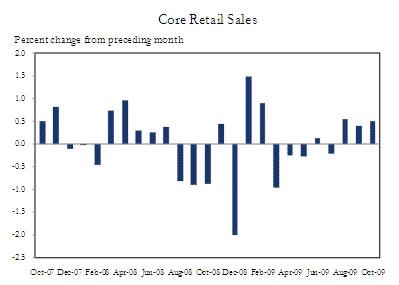 Austan Goolsbee is a member of the Council of Economic Advisers