Full Video and Photos: The President's Town Hall in Shanghai

November 16, 2009 at 12:46 PM ET by Jesse Lee
Twitter Facebook Email
Summary:
Watch and read about one of the most interesting discussions of the President Obama's term to date.
[[nid:6450]]

It was around midnight in Washington, D.C., and early afternoon in Shanghai when the President began an historic town hall in China.  Taking tough and straightforward questions from Chinese students, and solicted from across China via the internet, the President discussed everything from Taiwan to the role of women in society to open government.   Read through all of the exchanges in the full transcript.

In his extensive and probing opening remarks, the President related America's history, triumphing over tragedy and difficulty, to China's own story:

Of course, the story of our nation is not without its difficult chapters.  In many ways -- over many years -- we have struggled to advance the promise of these principles to all of our people, and to forge a more perfect union.  We fought a very painful civil war, and freed a portion of our population from slavery.  It took time for women to be extended the right to vote, workers to win the right to organize, and for immigrants from different corners of the globe to be fully embraced.  Even after they were freed, African Americans persevered through conditions that were separate and not equal, before winning full and equal rights.

None of this was easy.  But we made progress because of our belief in those core principles, which have served as our compass through the darkest of storms.  That is why Lincoln could stand up in the midst of civil war and declare it a struggle to see whether any nation, conceived in liberty, and "dedicated to the proposition that all men are created equal" could long endure. That is why Dr. Martin Luther King could stand on the steps of the Lincoln Memorial and ask that our nation live out the true meaning of its creed.  That's why immigrants from China to Kenya could find a home on our shores; why opportunity is available to all who would work for it; and why someone like me, who less than 50 years ago would have had trouble voting in some parts of America, is now able to serve as its President.

And that is why America will always speak out for these core principles around the world.   We do not seek to impose any system of government on any other nation, but we also don't believe that the principles that we stand for are unique to our nation.  These freedoms of expression and worship -- of access to information and political participation -- we believe are universal rights.  They should be available to all people, including ethnic and religious minorities -- whether they are in the United States, China, or any nation.  Indeed, it is that respect for universal rights that guides America's openness to other countries; our respect for different cultures; our commitment to international law; and our faith in the future.

These are all things that you should know about America.  I also know that we have much to learn about China.  Looking around at this magnificent city -- and looking around this room -- I do believe that our nations hold something important in common, and that is a belief in the future.  Neither the United States nor China is content to rest on our achievements.  For while China is an ancient nation, you are also clearly looking ahead with confidence, ambition, and a commitment to see that tomorrow's generation can do better than today's.

In addition to your growing economy, we admire China's extraordinary commitment to science and research -- a commitment borne out in everything from the infrastructure you build to the technology you use.  China is now the world's largest Internet user -- which is why we were so pleased to include the Internet as a part of today's event.  This country now has the world's largest mobile phone network, and it is investing in the new forms of energy that can both sustain growth and combat climate change -- and I'm looking forward to deepening the partnership between the United States and China in this critical area tomorrow.  But above all, I see China's future in you -- young people whose talent and dedication and dreams will do so much to help shape the 21st century.

I've said many times that I believe that our world is now fundamentally interconnected.  The jobs we do, the prosperity we build, the environment we protect, the security that we seek -- all of these things are shared.  And given that interconnection, power in the 21st century is no longer a zero-sum game; one country's success need not come at the expense of another.  And that is why the United States insists we do not seek to contain China's rise.  On the contrary, we welcome China as a strong and prosperous and successful member of the community of nations -- a China that draws on the rights, strengths, and creativity of individual Chinese like you.

To return to the proverb -- consider the past.  We know that more is to be gained when great powers cooperate than when they collide.  That is a lesson that human beings have learned time and again, and that is the example of the history between our nations.  And I believe strongly that cooperation must go beyond our government.  It must be rooted in our people -- in the studies we share, the business that we do, the knowledge that we gain, and even in the sports that we play.  And these bridges must be built by young men and women just like you and your counterparts in America. 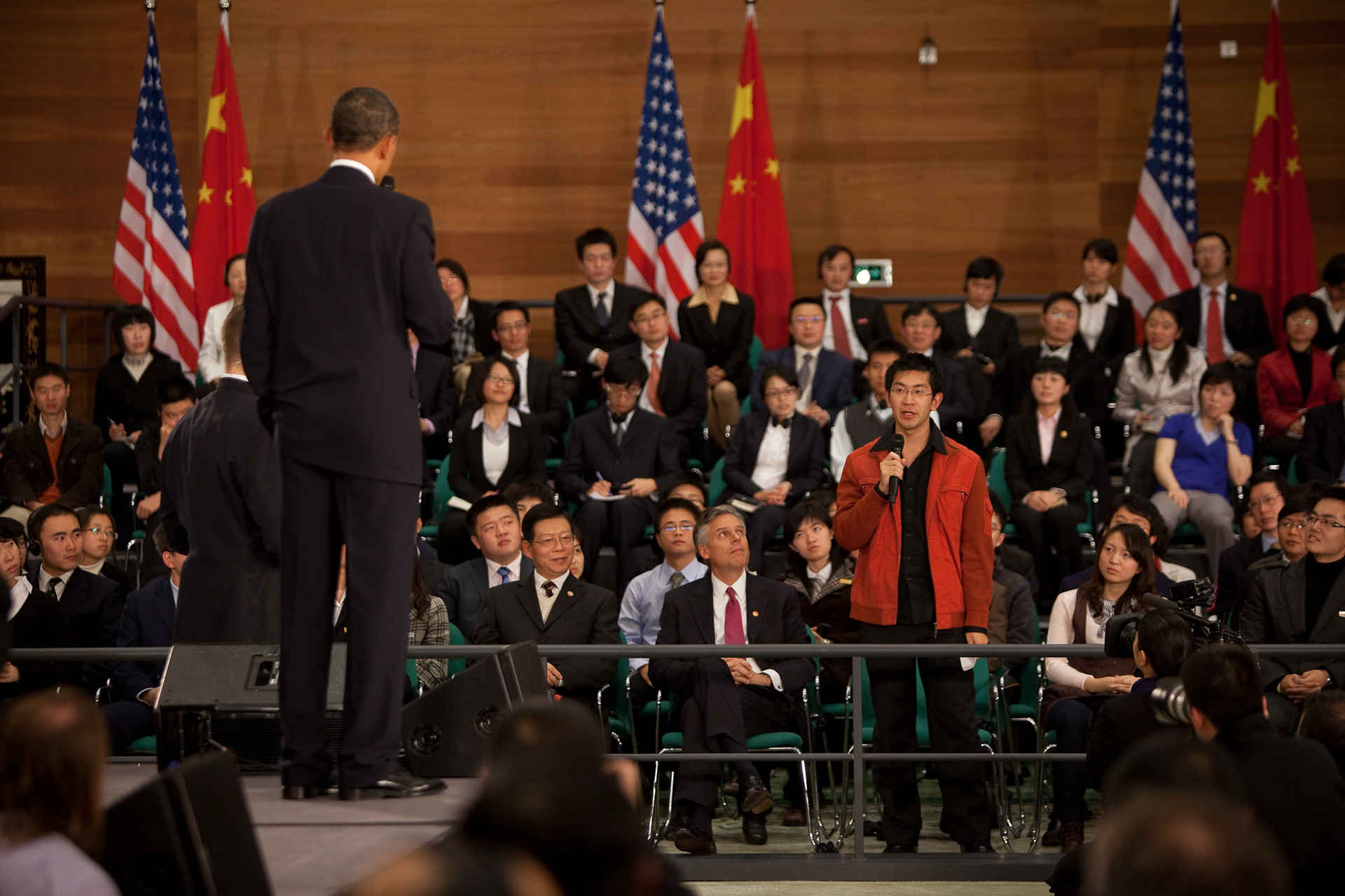 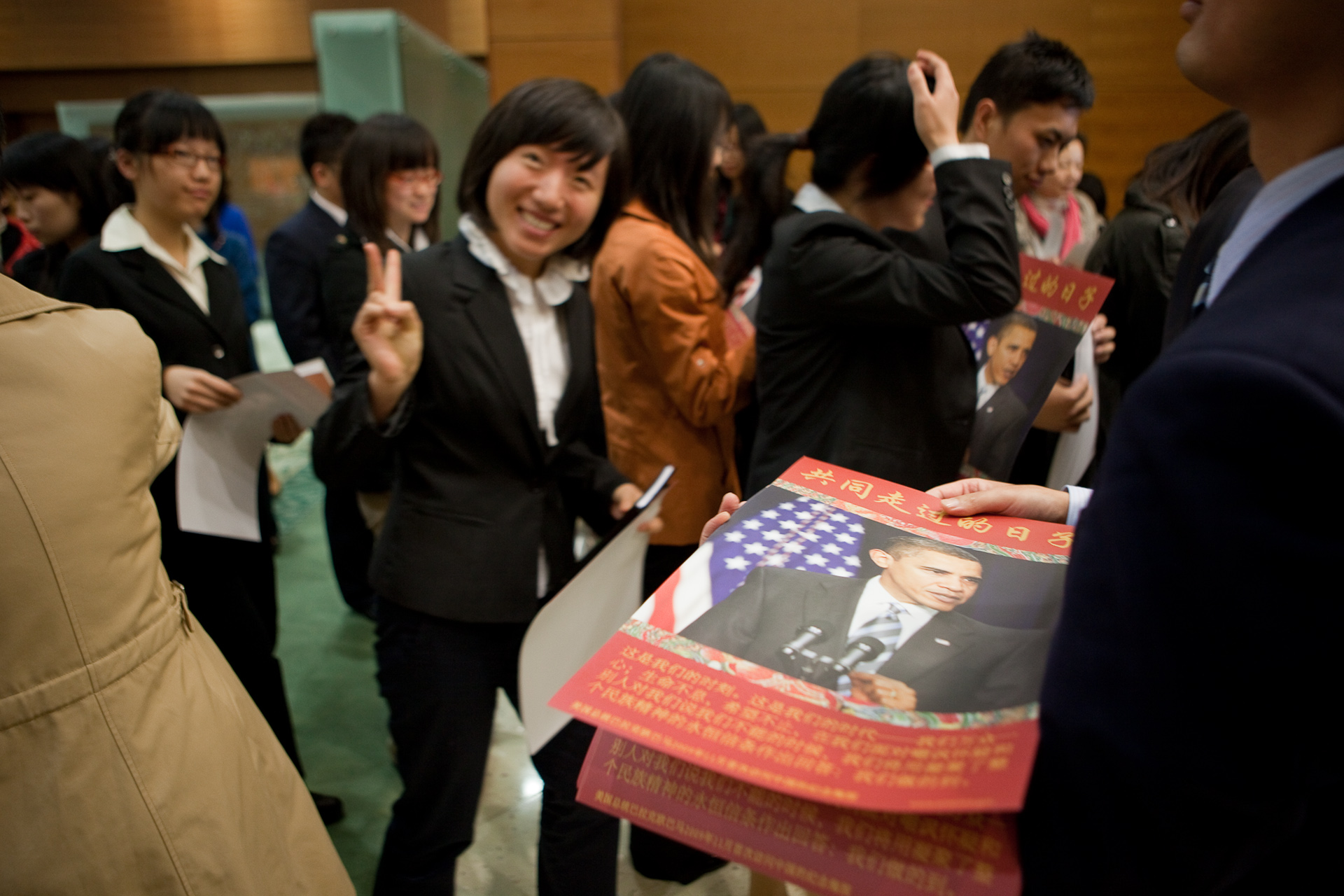