(The Book of) Change Has Come

November 19, 2009 at 12:26 PM ET by Dale Kreisher and Tony Hutchinson
Twitter Facebook Email
Summary:
At a small theater in Beijing, Chinese dancers executed moves conceived by a Chinese choreographer, set to music written by an American composer, and performed under a backdrop of ancient Chinese pictograms to mark the arrival of an American President.

One striking aspect of President Obama’s visit to China is the excitement it has generated at all social levels throughout the country. Rather than being seen as a dry, political event with little relationship to ordinary people’s lives – as such events often are perceived – President Obama’s trip here has energized Chinese and foreign residents alike.

Beijing is a city of intellectuals, artists, and scholars, with a lively and active arts scene. While the large establishment-supported (and state controlled) “arts industry” flourishes, so too do hundreds of small informal gatherings of artists creating things of beauty for art’s sake.

As the President arrived at Beijing’s airport, miles away, in Beijing’s old city center, in a tiny private theater in a small hutong (alleyway) not far from the Forbidden City, some of Beijing’s top artists celebrated his arrival in a unique way.

Musicians from the Central Conservatory, dancers from the Beijing Contemporary Dance Theater, and colleagues came together at the Penghao Theater next to the Central Drama School to stage an evening concert and dance performance in honor of the President’s arrival. The music was marked by fusion of Chinese and Western techniques and aesthetics. The keystone performance was a dance piece, with original music, composed and choreographed specifically for President Obama’s visit to China. Entitled “Changes,” this dance/music/visual spectacle draws inspiration from President Obama’s leitmotif of “A Change has Come” and the ancient Chinese divinatory text, the “I Ching,” or Book of Changes. The performance features Chinese dancers executing moves conceived by a Chinese choreographer; dancing to music written by an American composer; against a multimedia backdrop of ancient Chinese pictograms; in honor of a transformative American President. 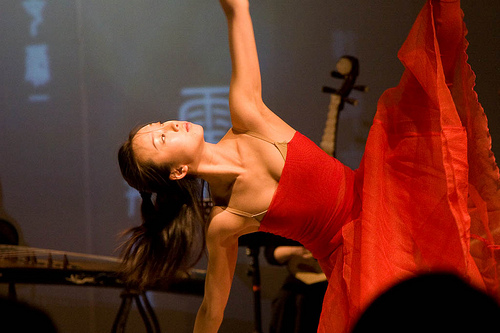 As Producer Christopher Ruggles, a Chicagoan resident in Beijing, put it: “’Changes,’ produced by Americans and Chinese living on the ground in Beijing, represents the kind of change President Obama has fought so hard for and celebrates the hope for peace that he brings. The performance is by grassroots artists making real change in the world -- it not only represents the opening and privatization of arts in China, but it also embodies teamwork between Chinese and Americans. The music incorporates both Chinese and American traditions, performed by a diverse group of talented musicians, demonstrating the hope for ethnic, racial, and international harmony; a true marriage of traditions between East and West in an innovative, creative work that celebrates the present moment, done by local people who live and work in Beijing.” 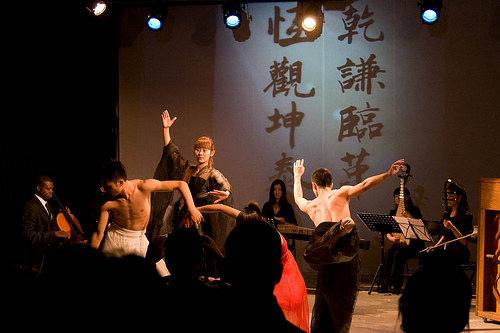 Musicians and dancers perform before projected calligraphy from the classic Chinese text, the I Ching. (Photo by Michael Wong) November 17, 2009. (by Michael Wong)

The audience went wild in reaction to the performances. We American Embassy officers among them were equally enthusiastic, and very proud of what citizens of the U.S. and China are doing together to celebrate the goals of the President’s visit.