Responding to Leader Boehner on Jobs

December 11, 2009 at 11:20 AM ET by Dan Pfeiffer
Twitter Facebook Email
Summary:
Communications Director Dan Pfeiffer responds to the latest attack from Republican Leadership on the economy.

Today, House Minority Leader John Boehner has an op-ed in the Washington Post.  Unfortunately, what we heard from Congressman Boehner was more of the same, status quo, business-as-usual policies that led us to this crisis.

Just one year ago, the financial system was on the edge of collapse. The economy was in free fall.

When the President came to office we were losing 700,000 jobs a month, last month we lost 11,000.  It's going to be a bumpy road and we have a lot more work to do, but it is clear we have taken bold steps to break the back of this recession. 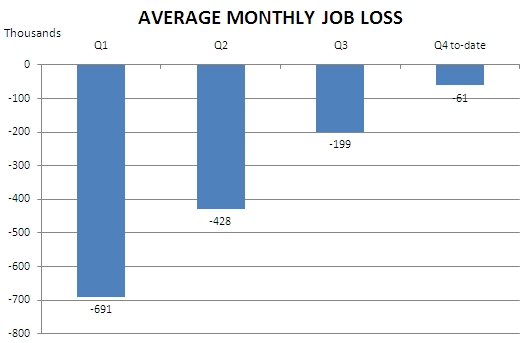 We've worked to stabilize the financial system, revive lending to small businesses and families, and prevent responsible homeowners from losing their homes.  Through the Recovery Act, we’ve cut taxes for middle class families, extended and increased unemployment insurance, and created and saved more than a million jobs.

As a result, the economy is now growing again for the first time in more than a year – and faster than at any time in two years.  Because of the irresponsible economic policies of the last few years, we have been forced to make difficult choices. What is clear is that without these actions, we would be far worse off.

Sometimes it seems as if some of the President’s opponents are rooting for failure on the economy. There is an element of glee in the press releases they send out every time new economic data comes out.

We agree on the need for tax relief for American families which is why the President signed a bill into law that provided a tax cut for 95% of working families.  Alarmist Republican rhetoric about tax increases conveniently ignores the fact that 95% of their constituents have seen their taxes cut since President Obama took office.

Leader Boehner leads off his attack with a reference  to "the president's proposals to raise taxes on small businesses."   This is odd given that the first of the three steps laid out by the President on Tuesday is explicitly lowering taxes on small businesses, with zero capital gains, extending expensing and bonus depreciation, and a tax credit to promote hiring—all proposals many Republican leaders have embraced in the past.

There are those who claim we have to choose between paying down our deficits on the one hand, and investing in job creation and economic growth on the other. But this is a false choice. Ensuring that economic growth and job creation are strong and sustained is critical to ensuring that we are increasing revenues and decreasing spending on things like unemployment so that our deficits will start coming down.

The President has always said there is an open door for good ideas and when Congressman Boehner and Republicans in Congress are interested in being a part of a conversation about how to move forward instead of rooting against the path to economic recovery—we look forward to having a productive conversation.