The CEA on Health Reform and the Economy, Take 2

December 14, 2009 at 12:24 PM ET by Jesse Lee
Twitter Facebook Email
Summary:
An update from the Council of Economic Advisers to their June report on health reform and the economy.

This morning the Council of Economic Advisers is out with a new report (pdf) on health reform and the economy, which serves as an update to their report in June.  The report is an interesting and accessible read, and essential for anybody interested in the topic of health reform, costs, and America's economy.  For a top line, here is one of their core conclusions:

Taken together, it is likely that the combination of provisions other than the excise tax could generate an additional reduction in the growth rate of private sector health care costs of 0.5 percentage point. This would imply a total slowing of private-sector cost growth of approximately 1.0 percentage point per year. Assuming that all of this slowing of cost growth is reflected in private health insurance premiums, an average family policy premium could be lower in 2019 by approximately $1000 than it otherwise would have been.

So what does this translate to for American families? 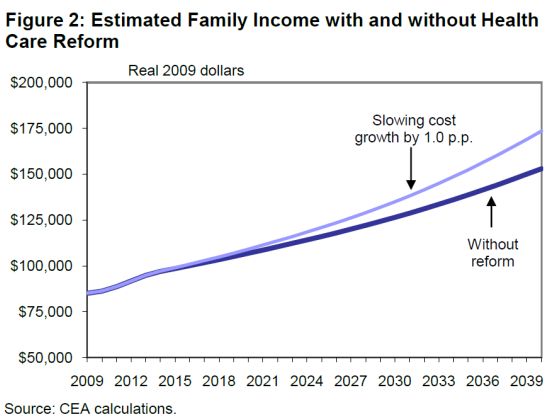 That's just one key data point in the report - take a look at the rest (pdf).

UPDATE: It should also be noted that CEA's calculations are not the high end in estimating the benefits for families, as the report goes on to note:

Recent research by Harvard economist David Cutler and Commonwealth Fund president Karen Davis suggests even greater savings from reform. Their estimates imply that a typical family in 2019 would pay nearly $2,000 less in health insurance premiums than they otherwise would have paid. Combining that with lower out-of-pocket costs, total savings would be more than $2,500.

Furthermore, given the amount of legitimate discussion about the costs of reform to government, it is important to mention that these savings will be reflected in the federal government's balance sheets in much the same way they are reflected in family checkbooks:

Taken together, the combination of Medicare- and Medicaid-related provisions in the Senate’s Patient Protection and Affordable Care Act are estimated to reduce the annual growth rate of Federal spending on both programs by 1.0 percentage point in the upcoming decade and by an even greater amount in the subsequent decade.