Holiday Cheer for the Heroes

Ed. Note: Thanks to Tech. Sgt. Nathan Gallahan for the post below, send your own video message to the troops via the DOD website.

I started this year's holiday season off right - waking up Thanksgiving morning in a tin building with 200 Army soldiers at a combat outpost in eastern Afghanistan.

I'm a U.S. Air Force Airman, journalist and photographer deployed to the ISAF Joint Command in Kabul. My two-week mission was to document and tell the story of the Afghan National Security Forces. I visited many locations including battalion headquarters and combat outposts; I witnessed everything I expected... and then some.

Then there were the holiday cards and smiles. I didn't anticipate that.

At each location I visited, there were all these cards and banners reassuring the soldiers America loved them, supported them and prayed for their safe return. I saw soldier upon soldier holding these cards up and showing their friends what amusing little anecdote was scribbled within. The only possessions these soldiers had were what they could carry on their back and holiday cards from school children from across our beautiful nation.

Unfortunately, I’m no stranger to sacrifice. After 12 years, and five deployments, in the Air Force, I’ve only spent four Christmas’ with family. I’ve become hardened. But this letter isn’t about me, this is about the guys in the field I took photos of, and who would never admit what I’m about to tell you, because they’re disciplined, strong and sacrifice all they know for causes so big, the effects will be felt across generations.

These letters, cards, candies, cookies … especially cookies … reach these guys and bring smiles to their faces when happiness in warzones is a rare commodity.

But these days, sending care packages via mail to such remote sites is really hard, especially since you need to know someone here before you can send anything (for security reasons, sending them to units or “any soldier” is no longer allowed).  The Department of Defense has a site though, that allows you to send video messages to service members.  It’s a great way to show support over the holidays and is a lot faster than mail, which can take a month or more, sometimes, to arrive here.

I went to the site skeptically and opened up the videos and discovered they delivered something a card, some candy or a cookie never could.  They delivered an experience, a portal, a visual of happy, smiling, free people taking the time to say Happy Holidays and thank you. These are the people we’re here for, and in one video I saw snow and a full-sized Christmas tree decorated to the nines! It was a video of the holiday season. When you’re out here, as much as everyone says Happy Holidays, it’s still a cold, sandy, treeless place. Seeing all of those videos, and the happy people saying thanks brought a tear to my eye. To those who submitted the videos, thank you for the moment.  For a little while, I felt the warmth of the holiday season.

I found out the videos are not limited to the site either.  The best ones are shown on the Pentagon Channel, which is broadcast all around Afghanistan and Iraq (and also to my wife back in England - we’ve been stationed there since 2007).

There is also a small link at the bottom of the page to a form that helps Americans get in touch with veterans organizations in their area that help them show support.

Obviously, the internet in a warzone can be as difficult to receive as a package of grandma’s cookies.  But for those Soldiers, Sailors, Marines and Airmen I met out there, every little bit of support does make an impact, regardless of whether it’s during the holidays or not. 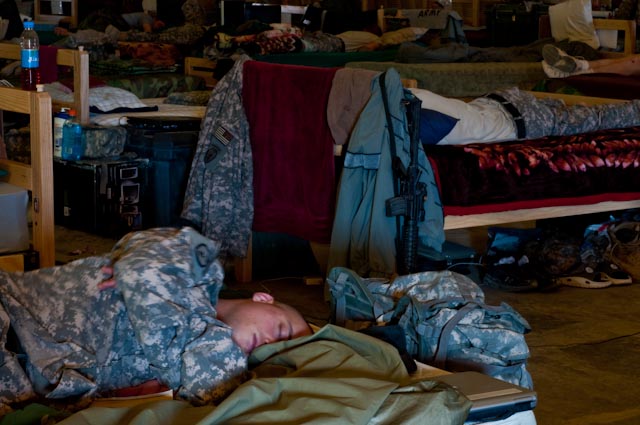 Soldiers from the U.S. Army's 1-40 Cavalry Squadron sleep after devouring Thanksgiving chow at Camp Clark, Afghanistan Nov. 26. The soldiers have been patrolling daily and helping train the Afghan National Army since their arrival to the camp approximately one month ago. (ISAF Joint Command photo by Tech. Sgt. Nathan Gallahan)

Tech. Sgt. Nathan Gallahan is a member of the ISAF Joint Command, Afghanistan