Learning from the Growth of the Internet -- the New Broadband Grants

December 17, 2009 at 12:06 PM ET by Peter Swire
Twitter Facebook Email
Summary:
Peter Swire, Special Assistant to the President for Economic Policy, says a few words and passes on a couple visual aids to help understand the broadband initiative being announced today by the Vice President.

Today, Vice President Biden is in Georgia to kick off over $2 billion in Recovery Act grants and loans to bring broadband to communities that currently have little or no access to the technology, all rolled out over the next 75 days.  The initial $182 million investment  announced today is for eighteen broadband projects benefiting seventeen states, and has already been matched by over $46 million in private capital.

We in the National Economic Council are releasing a new report (pdf) called "Recovery Act Investments in Broadband: Leveraging Federal Dollars to Create Jobs and Connect America."  The report explains the Administration’s strategy for using stimulus dollars wisely to get the biggest return on investment, in terms of jobs and exciting new opportunities for Americans.

An intriguing part of the report shows how the Recovery Act now will do for broadband what federal efforts did for the Internet in the 1980s and 1990s.  Here are three pictures of the Internet over time, from 1988 to 2007.  The thing to notice is that the federal government invested first in the backbone of the Internet.  Next, it helped fund regional networks to extend the Internet’s reach.  With the backbone and the middle piece in place, private investment took off, leading to the Internet connections of the present day. 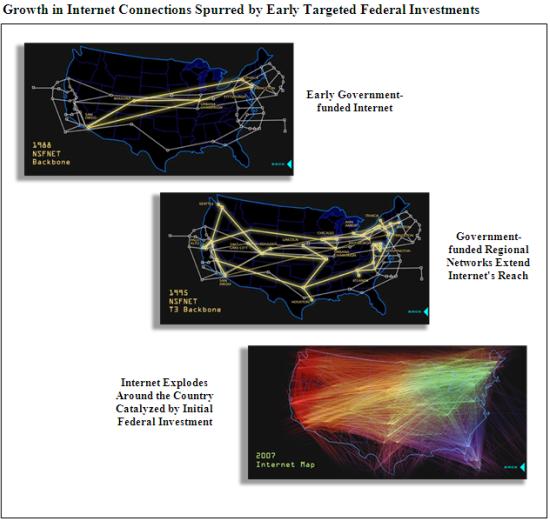 Source: National Science Foundation, NSF and the Birth of the Internet (http://www.nsf.gov/news/special_reports/nsf-net).

That’s the pattern we are following for the high-speed broadband funded in the Recovery Act.  A big focus of the new awards is on the “middle mile”—the infrastructure that connects the Internet backbone to communities across the nation. Our grants help build middle-mile infrastructure to underserved communities.  We make it easy to connect “anchor institutions” such as schools, libraries, and medical centers.  The middle mile investments, like the regional networks that filled in the Internet, set the stage for private investors to finish the job, with the so-called “last-mile” connections to homes and businesses.

The broadband grants in the Recovery Act will total over $2 billion in the next 75 days, and over $7 billion within the next year.  There are many stories to tell about how these broadband grants will spur private investment and provide opportunities in jobs, education, health care, new businesses, and other realms.  To learn more, read our new report, and read the Vice President’s speech.

Peter Swire is Special Assistant to the President for Economic Policy