December 21, 2009 at 5:00 PM ET by Jesse Lee
Twitter Facebook Email
Summary:
The President made clear early on that part of the way he intended to change the way Washington does business is by looking in every nook and cranny of government both for waste and abuse, and for ideas on how to root it out. Speaking in the Diplomatic room, he had a chance to highlight both.
[[nid:7368]]

The President made clear early on that part of the way he intended to change the way Washington does business is by looking in every nook and cranny of government both for waste and abuse, and for ideas on how to root it out. Speaking in the Diplomatic room today, he had a chance to highlight both.   He was joined by Nancy Fichtner, the Veterans Affairs employee who won the SAVE Award contest for the most popular cost-saving idea from a federal employee. In addition to commending her after meeting with her in the Oval Office, he also announced progress on his order earlier this year for departments and agencies to identify billions in saving through contracting waste and abuse:

I am pleased to be joined this morning by my Secretary of Veterans Affairs, Ric Shinseki; my budget director, Peter Orszag; and our special guest, last but not least, the winner of the first annual SAVE Award -- and that's Nancy Fichtner of Loma, Colorado.

Having met with Nancy a few minutes ago, I can tell you Nancy means business.  She is a single working mom; she's a clerk with the VA; she's an artist; she's an outdoorswoman; and she is an avid hunter.  In fact, somewhere in the western United States, there is an elk that is breathing a sigh of relief because Nancy is here instead of where she would have been:  hunting with her kids.  (Laughter.)  And I believe her children are here -- where's Nancy's kids?  There they are right there.  It's great to see you guys.  Nancy's daughter -- she skins and guts her elk, so don't mess with her either.  (Laughter.)

We're all here for a simple reason.  At a time when we face not only a fiscal crisis, but also a host of difficult challenges as a nation, business as usual in Washington just won't cut it.  We need a government that's more efficient, that's more effective, and far more fiscally responsible.

When my administration walked through the door, the country faced a growing economic downturn as well as a deepening fiscal hole.  Washington had passed massive tax cuts for the wealthy and an expensive new entitlement program without paying for any of it.  Health care costs continued to rise, year after year.  And little effort was made to cut wasteful spending.  As a result, over the previous eight years, the national debt doubled -- doubled.  In January, the deficit stood at $1.3 trillion.  And we had to make the difficult decision to add to the deficit in the short term to prevent the potential collapse of our economy.

But as I've said, in the long run, we can't continue to spend as if deficits don't have consequences; as if waste doesn't matter; as if the hard-earned tax dollars of the American people can be treated like Monopoly money.  That's what we've seen time and time again.  Washington has been more concerned about the next election than the next generation.  It's put off hard choices in spending bill after spending bill, budget after bloated budget.

Government contracting is a perfect example.  Between 2002 and 2008, the amount spent on government contracts more than doubled.  The amount spent on no-bid, non-competitive contracts jumped by 129 percent.  This is an inexcusable waste of money.  And that's why, back in March, I ordered federal departments and agencies to come up with plans to save up to $40 billion a year in contracting by 2011.  And over the past six months, agencies have been making cuts by looking for better deals, by ending contracts and doing work in house, and by opening up no-bid contracts to competitive bidding.  Because of these efforts, I'm proud to announce today that we are on track to meet our goals.  Twenty-four departments have identified more than $19 billion in savings for this year alone.

Learn more from the White House fact sheet, the Save Award page, or the OMB contracting reform report (pdf). 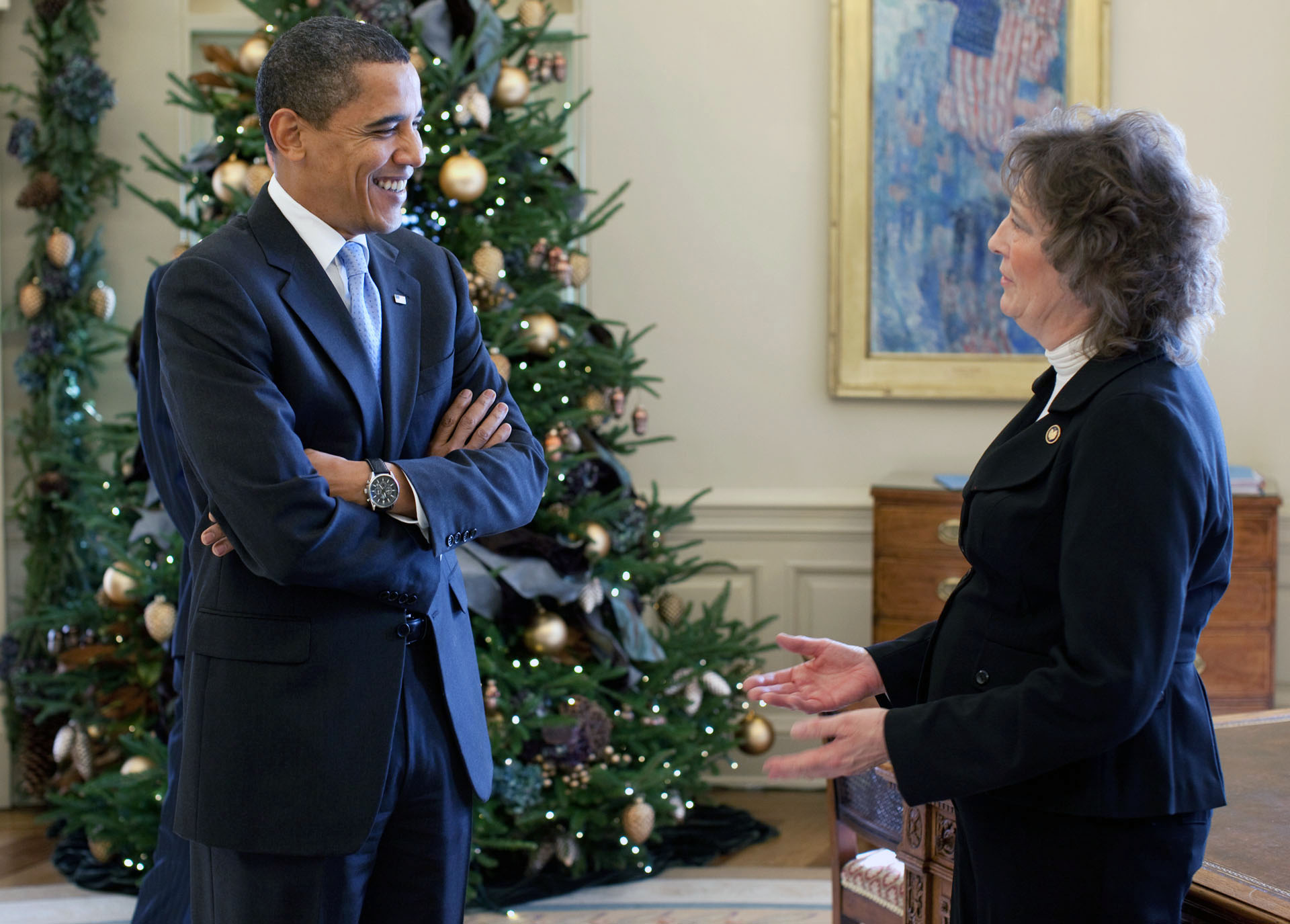 President Barack Obama talks with Nancy Fichtner, winner of the SAVE (Securing Americans Value and Efficiency) Award, in the Oval Office. Fichtner is a Fiscal Program Support Clerk at the Department of Veterans Affairs December 21, 2009. (Official White House Photo by Pete Souza)