January 16, 2010 at 6:38 PM ET by Kaye Sweetser
Twitter Facebook Email
Summary:
Responding to the President's call, the U.S. Navy moved at top speed to ready ships, load them with supplies and steam toward Haiti to provide humanitarian assistance after the devastating earthquake there Tuesday.

Responding to the President's call, the U.S. Navy moved at top speed to ready ships, load them with supplies and steam toward Haiti to provide humanitarian assistance after the devastating earthquake there Tuesday.

Already on station, the USS Carl Vinson (CVN 70) and her Sailors have been providing hospital services, along with a much needed aviation platform.

Navy Aviation Boatswain's Mate Handling (AW) Lisa Gurnick is a 21-year-old Sailor from Brunswick, Ohio stationed aboard USS Vinson and works on the flight deck. She said Friday that she felt honored to be a part of this mission. 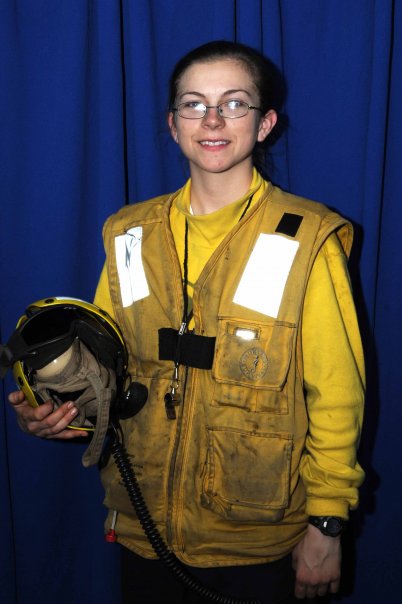 "This is exactly why I joined the Navy, to help other people, and now I'm getting to do that," began Gurnick. "We are on board an aircraft carrier that normally carries a large number of fixed-wing aircraft, but right now we are fully loaded with helicopters. We are working long hours right now and getting up early, but we are a strong team working together and I feel like we have such a clear purpose and mission. This (Friday) morning I have been working to launch and land helicopters as they are loaded up with water, medicine and people to fly into Haiti."

The humanitarian aid doesn't stop there.

As of Saturday, the Navy had nine ships scheduled to support the people of Haiti through air, hospital and supply operations. The forces are creating a "sea base" for staging humanitarian operations to provide assistance as quickly as possible. A testament to the naval forces agile operational ability, these ships combined can produce more than 900,000 gallons of water each day, a portion of which can be taken ashore to help relieve some suffering in Haiti. USNS Comfort, a Navy hospital ship, left Baltimore on Saturday morning after assembling a floating hospital of crew and supplies from around the nation. The ship has 250 hospital beds, four operation rooms and more than 500 medical staff.

As the Navy arrives ready on station, you can follow the naval forces humanitarian assistance on the official U.S. Navy Facebook page.