Speeding Up the Race to the Top

January 19, 2010 at 11:31 AM ET by Jesse Lee
Twitter Facebook Email
Summary:
The President chats with students at Graham Road Elementary School before announcing an expansion of "Race to the Top," one of America's biggest and most innovative investments in education to date.

Ed. Note: BlogHer is soliciting questions on the Obama Administration and education from their readers for a live online video chat tomorrow here at WhiteHouse.gov.  Go join their thread, and come back at 11:30AM EST tomorrow for the chat with Domestic Policy Advisor Melody Barnes.

This morning the President and Secretary of Education Arne Duncan paid a visit to Graham Road Elementary School in Falls Church, Virginia where they had a chat with about 30 6th grade students. The conversation put a face to the people they were trying to help with the President's latest investment of more than a billion dollars in next year's budget to amp up the President’s "Race to the Top" program – a competition to incentivize success that has already generated an overwhelming response from states, with over 30 states expected to compete for first-round funding.

You can learn more about Graham Road in the White House background release, but the school made a mark on its community by implementing a comprehensive strategy to turn around student achievement, adopting rigorous and high-quality student assessments, teacher evaluation and professional development, along with innovative and effective use of data systems to track student performance.  As a result, in 2008 all of the school's sixth-graders met Virginia's reading standards, and 96 percent met math standards, despite being one of the lowest income schools in the county. The expansion of Race to the Top comes with a plan to encourage precisely this kind of visionary change in schools that apply for the challenge. 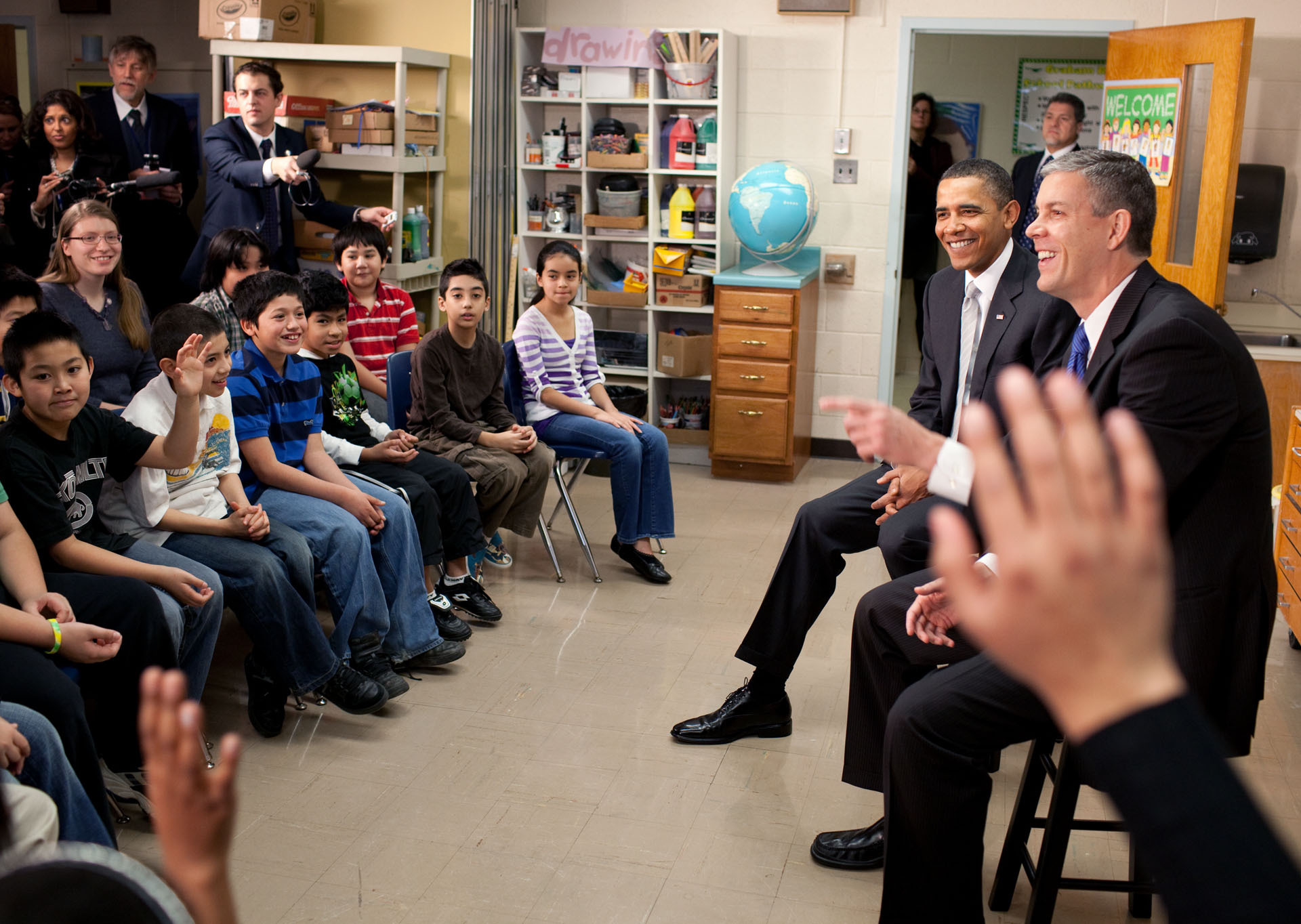 In his remarks after the meeting with students, the President explained how it all works, and the logic behind "Race to the Top":

Last year, we set aside more than $4 billion to improve our schools -- one of the largest investments in reform in our nation's history. But we didn't just hand this money out to states that wanted it; we challenged them to compete for it. And it's the competitive nature of this initiative that we believe helps make it so effective. We laid out a few key criteria and said if you meet these tests, we'll reward you by helping you reform your schools.

First, we encouraged states to adopt more challenging standards that will actually prepare our kids for college and their careers. We also encouraged schools to adopt better assessments -- not just one-size-fits-all approaches -- to measure what our kids know and what they're able to do.

Third, we urged states to use cutting-edge data systems to track a child's progress throughout their academic career, and to link that child's progress to their teachers so we know what's working and what's not working in the classroom. Fourth, we encouraged states to show a stronger commitment to turning around some of their lowest-performing schools.

And even before states have received a single dime of taxpayer money, many of them have committed to instituting important reforms to better position themselves for a Race to the Top grant. Forty-eight states have now joined a nationwide partnership to develop a common set of rigorous, career-ready standards in reading and math. Wisconsin has enacted legislation permitting schools to link student achievement to the performance of teachers and principals. In Illinois, Louisiana, Tennessee, California, we've seen changes in laws or policies to let public charter schools expand and succeed. These are public schools with more independence that are formed by teachers, parents, and community members.

So by rewarding some of these states submitting applications today, by extending the Race to the Top for states, by launching a Race to the Top among school districts, and by applying the principles of Race to the Top to other federal programs, we'll build on this success. We're going to raise the bar for all our students and take bigger steps towards closing the achievement gap that denies so many students, especially black and Latino students, a fair shot at their dreams.