Today, we’re excited to announce the new White House App available for Apple iPhone and iPod Touch.  The White House App delivers dynamic content from WhiteHouse.gov to the palm of your hand. 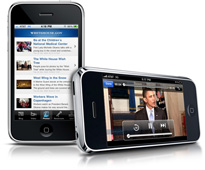 One feature that stands out is live video streaming.  Now anyone with this app can watch the President’s public events at the White House, frequent web chats with Administration officials, and other events like key speeches and press briefings in real time.

In fact, the President’s State of the Union speech next week is a great example.  In addition to the millions of Americans watching through TV and websites like WhiteHouse.gov/live, iPhone users on the go will be able to tune in through their phones.

The White House App also lets users stay up to date with the White House Blog and the latest from the Briefing Room.  Browse behind-the-scenes photos and watch on-demand videos.  The app provides instant access to full videos from recent speeches, press briefings, and special events.

This is just the first step for WhiteHouse.gov’s mobile platform.

In the coming weeks, we’ll also launch mobile.WhiteHouse.gov, a mobile-ready version of WhiteHouse.gov that is optimized for any internet-enabled mobile device, including many other phones.

Mobile internet access is an important way Americans are staying informed.  Mobile web usage grew over 100% in the last year in the United States and higher worldwide.  As part of President Obama’s commitment to an open and transparent government, the White House App makes getting all the latest news and media from the White House easier than ever.  And of course, we’ll continue to look for new and emerging technologies to engage the American people and make information about the President and his administration easily available.

Update, Sept. 3, 2012: We've released updates for the White House apps for iPhone, iPad and Android and relaunched the mobile version of WhiteHouse.gov.