Where We Are and Where We Were

February 8, 2010 at 2:51 PM ET by Jared Bernstein
Twitter Facebook Email
Summary:
Jared Bernstein, Chief Economist to Vice President Biden, puts the depth of the current recession in perspective and discusses what the Obama Administration is doing about it.

Along with a massive snowstorm, Friday brought a blizzard of new info on the job market.   From the perspective of our work at the White House, two points stand out, one about where we are and the other about where we’ve been.

First, while there are encouraging signs regarding jobs, they are early signs and must be viewed with care.   The job market is clearly doing better than it was but the level of unemployment is miles north of where it needs to be.  Unemployment fell significantly last month, which is good, but a) it’s a one month data point and not yet a new trend, and b) it fell from 10% to 9.7%, and that's still an unacceptably high rate of joblessness.

Second, today's data release has new, revised information on just how bad this recession has been in the job market.  Here a chart is worth a lot of words.
The chart plots the course of payroll employment over the last four recessions, including this one.  In each case, we index jobs at the start of the recession to 100%, and the x-axis shows the number of months from when the recession began.

By setting it up this way, you get a lot of useful, comparative information across different downturns.  For example, you see how much longer it took to regain the lost jobs in the 1990 and 2001 recession compared to the 1981 version.

But the main point is how severe this recession has been on job loss.  There are two lines in the graph for the current recession because last week's data provided a revision based on more complete data.  We knew it was bad, but it turned out to be even worse.  We thought we were losing an unprecedented 690,000 jobs per month in the first quarter of last year.  It turned out to be 750,000.  In the four months between December 2008 and March 2009, we lost more jobs than during the last two recessions combined.

That's where we were.  Where we are, as noted, is better but not good enough.  Last month, we lost 20,000 jobs and that's not an outlier—it's another data point in an improving  trend moving towards net job gains, which we expect to be seeing in a few months.  But the job market won't be in recovery until those small negatives turn into big positives. 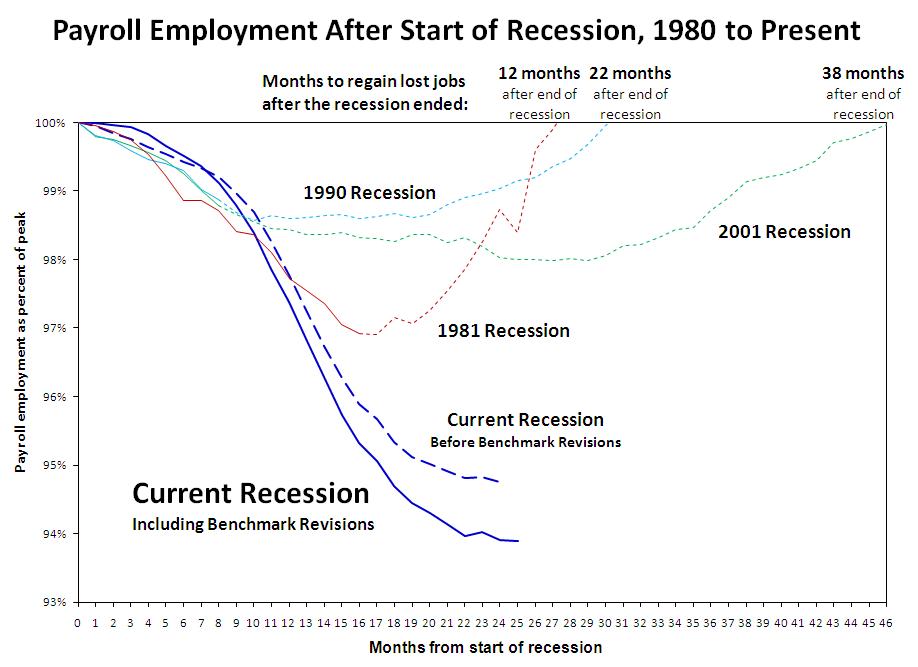 Here's what comes out of all this: our policies, most notably the Recovery Act, have helped move us from a situation where we were losing a nightmarish 750,000 jobs per month to one in which we've pulled back from the economic abyss and are moving a lot closer to adding jobs, on net, on a regular basis.  But we can't kick back and wait for that moment.    There's too much pain out there, too many families struggling with a job market that’s simply not providing the opportunities they need to get back on their feet.

So we have to hasten the arrival of more robust job growth with a set of initiatives targeted at the factors holding back job creation.  The House passed a targeted jobs bill in December that included some of these priorities, including upgrading transportation and infrastructure, and aid to states to keep teachers, cops, and firefighters on the job.  The Senate’s actively working on proposals with some of those same components.

Last week the President announced an initiative to help credit flow more freely to small businesses that want to expand their operations and payrolls but can’t access the capital.  Both the President and Congress have been working on a new hiring tax credit targeted at the business owner who is considering adding workers but needs a nudge (and you can see employers dipping their toes in the labor pool—temp work has increased in each of the past four months).

Another idea in the mix right now is investment in infrastructure to help offset the continuing job losses in construction, a sector that took another big hit last month.  And another is help to state and local governments facing tight budget squeezes and the resultant layoffs in folks like teachers, down 10,500 last month at the local level.

GDP is growing and growing pretty solidly.  The employment data show employers cutting a lot less but not yet adding a lot more.  Unemployment moved in the right direction last month, and we need to build on that positive movement.

But as the figure above shows so clearly, we've got a huge hole to fill.  That hole wasn't dug overnight, and it's going to take some time and some smart, targeted policies, to fill it up.  Now there's a shovel-ready project worth taking on.