Fiscal Stimulus Making an Impact around the World

February 19, 2010 at 10:26 AM ET by Jay Shambaugh
Twitter Facebook Email
Summary:
Jay Shambaugh, a Senior Economist at the Council of Economic Advisers, looks at the effect of stimulus across countries as much of the world responds to an economic crisis.

One of the challenges in evaluating the impact of fiscal stimulus is to figure out what would have happened had there been no stimulus. Earlier, this blog discussed evidence that the American Recovery and Reinvestment Act of 2009 is having a positive impact on the U.S. economy.  More evidence can be found in the Second Quarterly Report of the American Recovery and Reinvestment Act of 2009,  and independent evaluations have been highlighted in the media like in this analysis from the New York Times.

Another type of evidence can come from looking at the impact of stimulus across countries.  This economic crisis has been a world-wide crisis and the government of nearly every major economy engaged in discretionary fiscal stimulus to try to rekindle demand.  As shown in Chapter 3 of the Economic Report of the President, real GDP growth performance varied with the amount of stimulus.   One cannot simply look at growth and stimulus alone, because the economic crisis differed in depth across countries and because different countries have different typical growth rates.  Thus, to understand the impact of fiscal stimulus, one must estimate what would have happened had there been no stimulus—a counterfactual.  Private sector expectations in November 2008—after the crisis had begun but before most stimulus packages were adopted—can serve as that counterfactual.  The evidence in the figure below shows that countries with larger fiscal stimulus on average exceeded expectations to a greater degree than those with smaller stimulus packages. 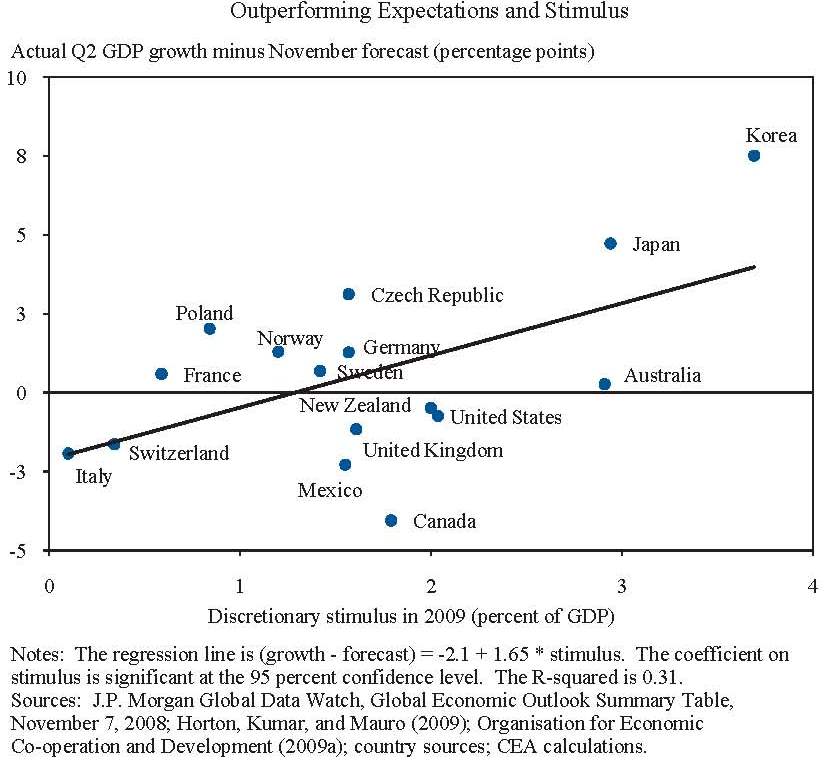 This picture attempts to control for all other effects (other policies, size of shock, automatic stabilizers) by using expectations.  If fiscal stimulus is larger in countries that faced an unexpectedly large negative shock, this procedure would be an underestimate of the impact of stimulus.  If fiscal stimulus is correlated with unanticipated monetary stimulus, it could overestimate the role of fiscal stimulus.  But, this is an attempt to control for “what would have happened” based on what the market expected.  Using OECD forecasts or a time series forecast gives similar results.  See more details in the Economic Report of the President and in our report The Effects of Fiscal Stimulus: A Cross-Country Perspective.

Quarterly growth rates can exhibit some volatility and can be very hard to predict many months out, but looking at cumulative growth from the second quarter to the end of the year against forecasts for that period shows a very similar picture (though GDP data for the fourth quarter is still not available for many countries).  High stimulus countries outperformed expectations.  Fiscal stimulus helped restart the world economy.