February 24, 2010 at 3:39 PM ET by
Twitter Facebook Email
Summary:
Middle school students in town for the "Future City" engineering competition met with the President last week for a call to the International Space Station. Two students have written about their experience with the President and talking to astronauts.

Last week, President Obama made a long distance call to astronauts aboard the International Space Station (ISS). Building on the "Educate to Innovate" campaign, the President welcomed middle school students from Michigan, Florida, North Carolina, and Nebraska to the White House to participate in the call and ask questions of the astronauts.

The students were in town for the “Future City” engineering competition—an event that drew seventh and eighth graders from across the nation to Washington, D.C., to discuss innovative ideas and designs for a city of tomorrow.

Two students from St. Thomas The Apostle Catholic School, which is near Miami, Florida, wrote the following blog posts for us about their experience of visiting the White House, meeting the President, and speaking with astronauts aboard the ISS.

When I first passed through the gates of the White House, I could not stop thinking about how lucky I was to have this kind of opportunity. The White House was spectacular, stunning, and it reminded me of scenes in history as I passed through famous rooms such as the Roosevelt Room. Meeting the President was a great honor. He was a very kind and casual man. Talking to the astronauts in space was the most amazing thing, especially when you’re thinking about how they’re outside of Earth, in zero-gravity, doing research next to stars and other objects in space. When I had the chance to ask them a question about their mission, I decided to ask them about their feelings and emotions. I was curious about what the experience is like in outer space. Talking to the astronauts inspired me to consider pursuing a career in astronomical studies.

Last week, I had the incredible opportunity to go to the White House. I never imagined I would also be in the same room with the President while he placed a call to the astronauts in outer space! My team members and I were in Washington, D.C., for an engineering competition when our teacher, Ms. Chu, told us that there was a possibility that we would get to meet the President. At the time we were told not to hope too much because it would probably not happen. Next thing I know, I am within touching distance from the President. It was a very overwhelming experience. The entire time I was trying to convince myself that it was really happening and that I wasn’t dreaming. Finally, when the call was over, the President invited us into his office for a photograph. At this point, we were all on the point of hyperventilating. This one chance encounter made my trip to D.C. one of the most memorable vacations of my life. 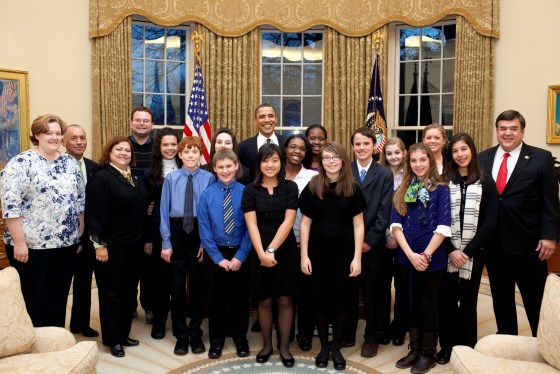