February 26, 2010 at 2:08 PM ET by Christina Romer and Mark Duggan
Twitter Facebook Email
Summary:
A new and enlightening analysis from the Council of Economic Advisers.

Small businesses are essential to the nation’s economy and its recovery from the recession. They are responsible for a disproportionate share of economy-wide net employment growth, and account for a large majority of jobs in start-ups, a key source of innovation and economic growth.

Nevertheless, both a CEA report released last year and new analysis by the Council of Economic Advisers shows that the status quo of rising costs and declining coverage is unsustainable for small businesses. Over the past decade, average annual family premiums for workers at small firms increased by 123 percent, from $5,700 in 1999 to $12,700 in 2009, while the percentage of small firms offering coverage fell from 65 percent to 59 percent. As shown in the following figure, this insurance offer rate is especially low at small firms with fewer than 10, 25, or 50 employees. 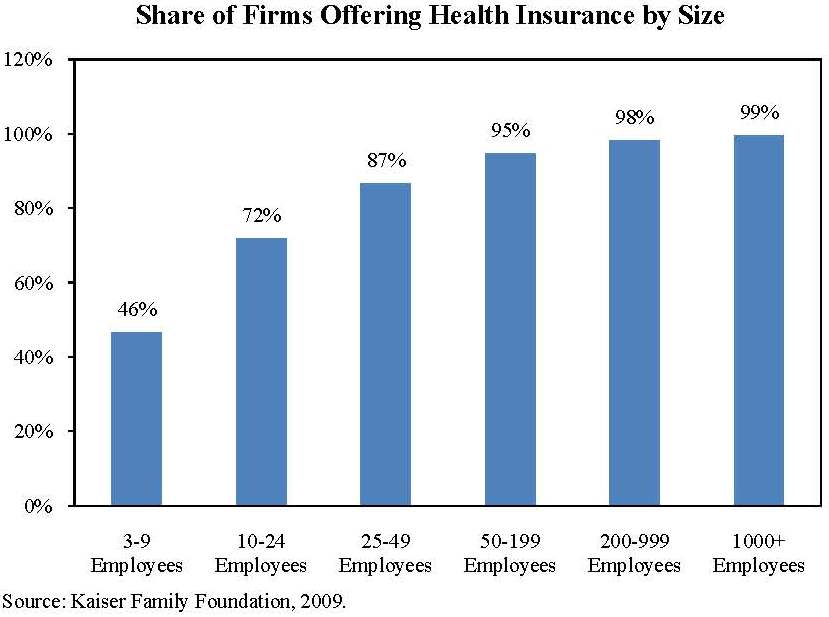 The President’s proposal makes more than 60 percent of small firms eligible for tax credits to help combat rising costs and declining coverage for their workers.

The President’s proposal exempts virtually all small businesses from any employer responsibility requirements.

Pooling together with other small firms and individuals through a competitive Exchange will reduce costs, increase plan choice, and provide pressure on insurers to reduce their markups.

Health insurance reform will benefit workers, firms, and the government budget in many more ways.  For a discussion of these impacts, please read the CEA’s report on the Economic Case for Health Care Reform.  Chapter 7 of the Economic Report of the President (pdf) also provides a comprehensive discussion of the challenges in the current health care system and the way that reform components work together to address these problems.