Moving Forward to Put the American People Ahead of Insurance Companies

March 3, 2010 at 3:32 PM ET by Jesse Lee
Twitter Facebook Email
Summary:
The President makes it clear that he intends to move forward on reform to put Americans in control of their health care, and explains once again why.

Ed. Note: At 3:40PM EST, HHS Secretary Kathleen Sebelius and Health Reform Director Nancy-Ann DeParle will take your questions about the President's proposal and remarks in a live video discussion. Watch here at WhiteHouse.gov/live, or join the discussion through Facebook.

Today the President made it exceedingly clear that he intends to move forward on reform to put Americans in control of their health care, and explained once again why:

Democrats and Republicans agree that this is a serious problem for America.  And we agree that if we do nothing -– if we throw up our hands and walk away -– it’s a problem that will only grow worse.  Nobody disputes that.  More Americans will lose their family's health insurance if they switch jobs or lose their job.  More small businesses will be forced to choose between health care and hiring.  More insurance companies will deny people coverage who have preexisting conditions, or they'll drop people's coverage when they get sick and need it most.  And the rising cost of Medicare and Medicaid will sink our government deeper and deeper and deeper into debt.  On all of this we agree.

So the question is, what do we do about it?

The answer to that question, of course, has been at least a year in the making – countless hearings, meetings, and conversations have brought the best ideas from both sides to the surface, and the President’s proposal includes a broad array of Republican suggestions in addition to Democratic ones. 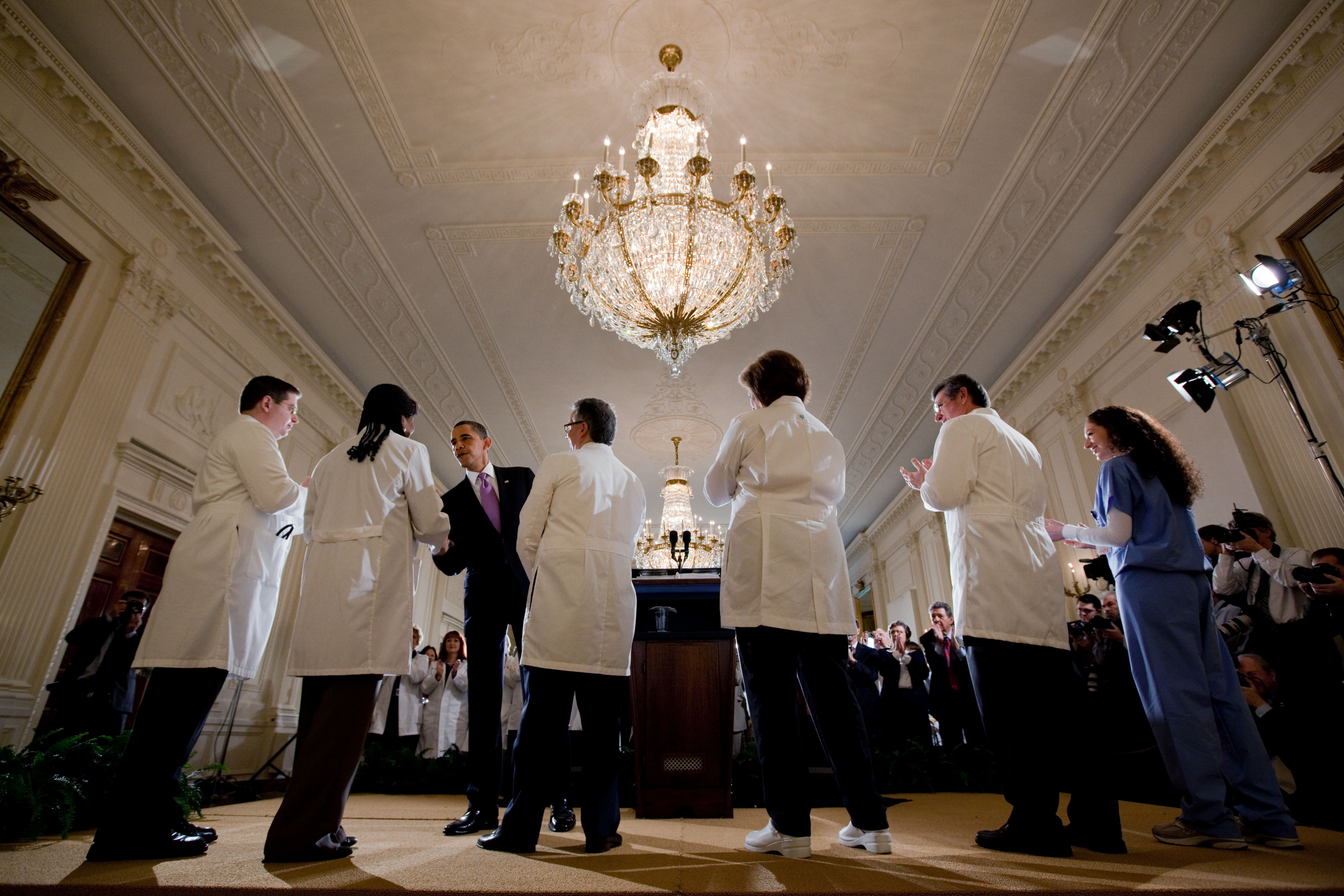 However, the President also confronted the fact that there is a fundamental disagreement on how to deal with some core elements of the problem. Explaining that just as he has rejected one extreme of the spectrum that calls for an actual government takeover of health care, so too does he disagree with the other side:

On the other end of the spectrum, there are those, and this includes most Republicans in Congress, who believe the answer is to loosen regulations on the insurance industry -- whether it's state consumer protections or minimum standards for the kind of insurance they can sell.  The argument is, is that that will somehow lower costs.  I disagree with that approach.  I'm concerned that this would only give the insurance industry even freer rein to raise premiums and deny care.

So I don't believe we should give government bureaucrats or insurance company bureaucrats more control over health care in America.  I believe it's time to give the American people more control over their health care and their health insurance.  I don't believe we can afford to leave life-and-death decisions about health care to the discretion of insurance company executives alone.  I believe that doctors and nurses and physician assistants like the ones in this room should be free to decide what's best for their patients.  (Applause.)

The President spoke at length about the merits of his proposal, from ending insurance company abuses, to the fact that it is paid for will reduce the deficit (concepts largely abandoned in recent years), to the fact that 30 million people will be covered and millions of middle class families will be able to afford the peace of mind of quality insurance for the first time.

He also called for an up or down vote in the next few weeks just as has been given to many health care bills before and to the Bush tax cuts, pledging that “from now until then, I will do everything in my power to make the case for reform.”

He closed with an explanation of what is motivating him:

So at stake right now is not just our ability to solve this problem, but our ability to solve any problem. The American people want to know if it's still possible for Washington to look out for their interests and their future. They are waiting for us to act. They are waiting for us to lead. And as long as I hold this office, I intend to provide that leadership. I do not know how this plays politically, but I know it's right. (Applause.) And so I ask Congress to finish its work, and I look forward to signing this reform into law.