Giving Peace of Mind Back to the American People

The urgency of health reform couldn’t be more clear.

Across the country, working families have been saddled with huge rate increase in their health insurance premiums. In California, consumers were informed of rate hikes as high as 39 percent, and in Michigan, insurers sought a 56 percent increase and this is happening across the country.

This is unacceptable, particularly at a time when families are struggling to make ends meet and the largest insurers took in more than $12 billion in profits last year alone. The American people want to understand why their premiums are skyrocketing while some companies are doing well. And they deserve a clear and accurate explanation.

I just got out of a meeting where I asked leaders from big insurance companies for answers. I hosted a discussion with the CEOs of UnitedHealth Group Inc., WellPoint Inc., Aetna Inc., Health Care Service Corporation and CIGNA HealthCare Inc., along with leaders from the National Association of Insurance Commissioners. I asked them to explain why these crushing burdens are being placed on middle-class families and what we can do to lower costs.

I also asked the CEOs to post the actuarial justification for these stunning rate increases online in an easy-to-understand manner, so that consumers can see why premiums are skyrocketing to the point that some people in the individual market can no longer afford coverage. I hope they will act quickly and make this information available to all of us. If insurance companies are going to raise rates, the least they can do is tell us why. 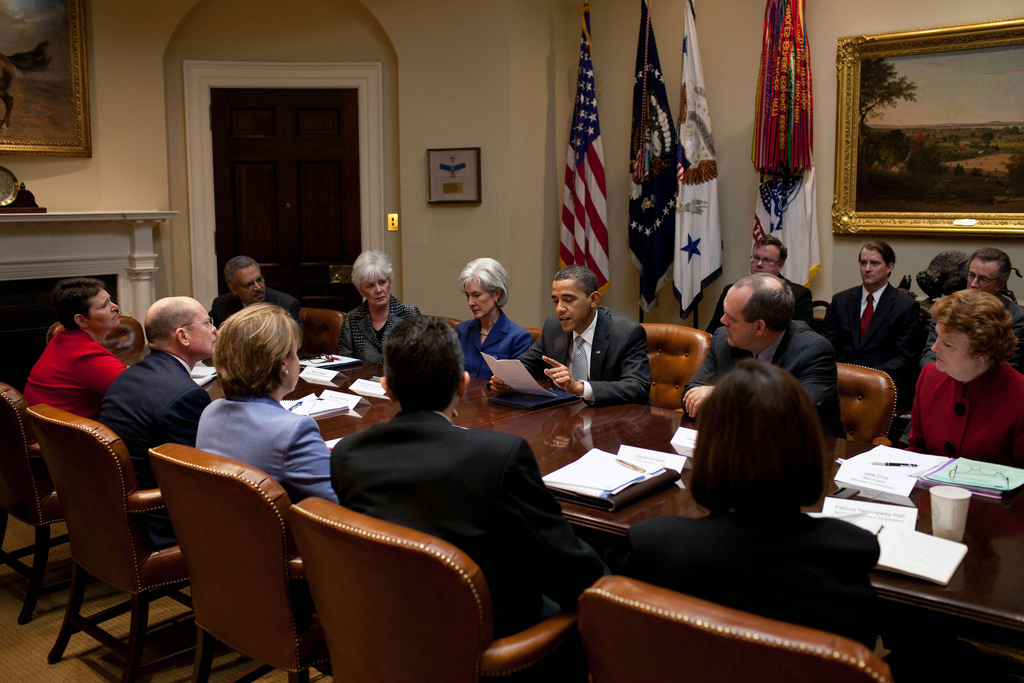 President Barack Obama reads a letter he received from Natoma Canfield of Medina, Ohio, during a meeting with insurance company executives hosted by HHS Secretary Kathleen Sebelius in the Roosevelt Room of the White House March 4, 2010. (Official White House Photo by Pete Souza)

But families deserve more. They need to know how we can prevent these increases from happening in the future. Families want to be responsible and buy health insurance.  They’re willing to pay a fair price.  They understand that health care is not cheap.

But they don’t want to be afraid every time they open a letter from their insurer that their premiums are going up $7,000 a year.  Or that their application has been rejected because they take a medicine for high blood pressure. Or that their insurance is being cancelled because of a mistake on their paperwork.

The point of health insurance is to give people peace of mind, and they’re not getting it.  The system we have is failing them.

President Obama has offered a health insurance reform proposal to help working families and small business owners.  It will hold insurance companies accountable by laying out common-sense rules of the road to keep premiums down, prevent insurance industry abuses and outlaw discrimination against Americans with pre-existing conditions.

Reform also includes key provisions that will protect consumers from unjustified premium increases. Building upon existing state practices, the President’s plan includes a new Federal authority to force insurers to justify their rate increases, provide additional support for states that already do rate reviews, and help those states that don’t currently review increases on their own.

Right now, in 21 states, insurance companies can raise rates without any oversight, no questions asked, and consumers suffer. Reform will change the rules and help stop exorbitant increases.

And the President’s plan will help reduce costs and require insurance companies to dedicate more of the premiums dollars they collect to actual care instead of profits, CEO salaries and advertising.  If they don’t spend enough on actual care, they’ll be required to send rebate checks to consumers.

Comprehensive reform is a necessary step to fix our broken health insurance market. Holding the insurance industry accountable is one step in that direction.

Kathleen Sebelius is Secretary of Health and Human Services