March 5, 2010 at 9:26 AM ET by Steven Braun
Twitter Facebook Email
Summary:
Steven Braun, Director of Macroeconomic Forecasting for the Council of Economic Advisers, explains how weather events, like the back-to-back February snowstorms in the Northeast, can affect payroll employment and shorten the workweek.

The back-to-back snowstorms in the northeast corridor on February 4-7 and 9-11 appear to have substantially reduced payroll employment and shortened the workweek during the reference week for the February labor market data.  Based on previous instances of bad weather during the survey reference week, we think that measured February employment was reduced by roughly 100,000 while the measured workweek was shortened by about 0.3 hour.  Such a weather-related decline does not indicate that the February level of overall economic activity was weak.  Rather, it indicates that the survey reference week did not reliably reflect activity for the month as a whole.  Whatever the weather-related loss in February, it likely will be reversed in March, resulting in a larger-than-normal gain.

Why Weather Affects Measured Payroll Employment and the Workweek

Although payroll employment data—collected from the Current Employment Survey—are released as monthly values, the survey counts employment for the pay period that includes the 12th of the month.  Because about half of firms issue weekly paychecks, one can approximately describe this survey design as measuring employment during the week that includes the 12th.  The back-to-back February snowstorms prevented many workers from reporting to work for several days during the week including the 12th.  Some missed the entire week.  Of those missing the entire week, some missed an entire paycheck, and so are not counted as employed in the establishment survey. (Salaried workers and others who are paid whether or not they have a snow day are counted as employed.)  In contrast, the household survey counts these workers as employed, so that bad weather would have only a small effect on the employment and unemployment data reported through that survey.

Although some workers may have missed an entire week of work, many more workers likely missed a few days during the week including the 12th because of the storms.  Because many workers are not paid for snow days, bad weather shortens the reported workweek.

One good measure of a storm’s effect on employment comes from the other survey released with each labor market report: the survey of households.  The household survey reports the number of people who usually work full time but did not work at all during the survey reference week because of bad weather (Series LNU02036012 from the Current Population Survey).

We detrended this “not at work due to bad weather” series by dividing by nonfarm employment.  Measured in this way, January 1996 was the most severe weather event during a survey reference week since our data began in 1976, when it prevented 1.66% of the workforce from reporting to work.  Chart 1 shows the number of people who said they were not working because of weather in the household survey along with the monthly change in payroll employment in the mid-1990s.  This figure makes clear that the 1996 snowstorm had a substantial one-time negative effect on payroll employment growth in January 1996.  This was followed by a corresponding one-time positive effect in February 1996. 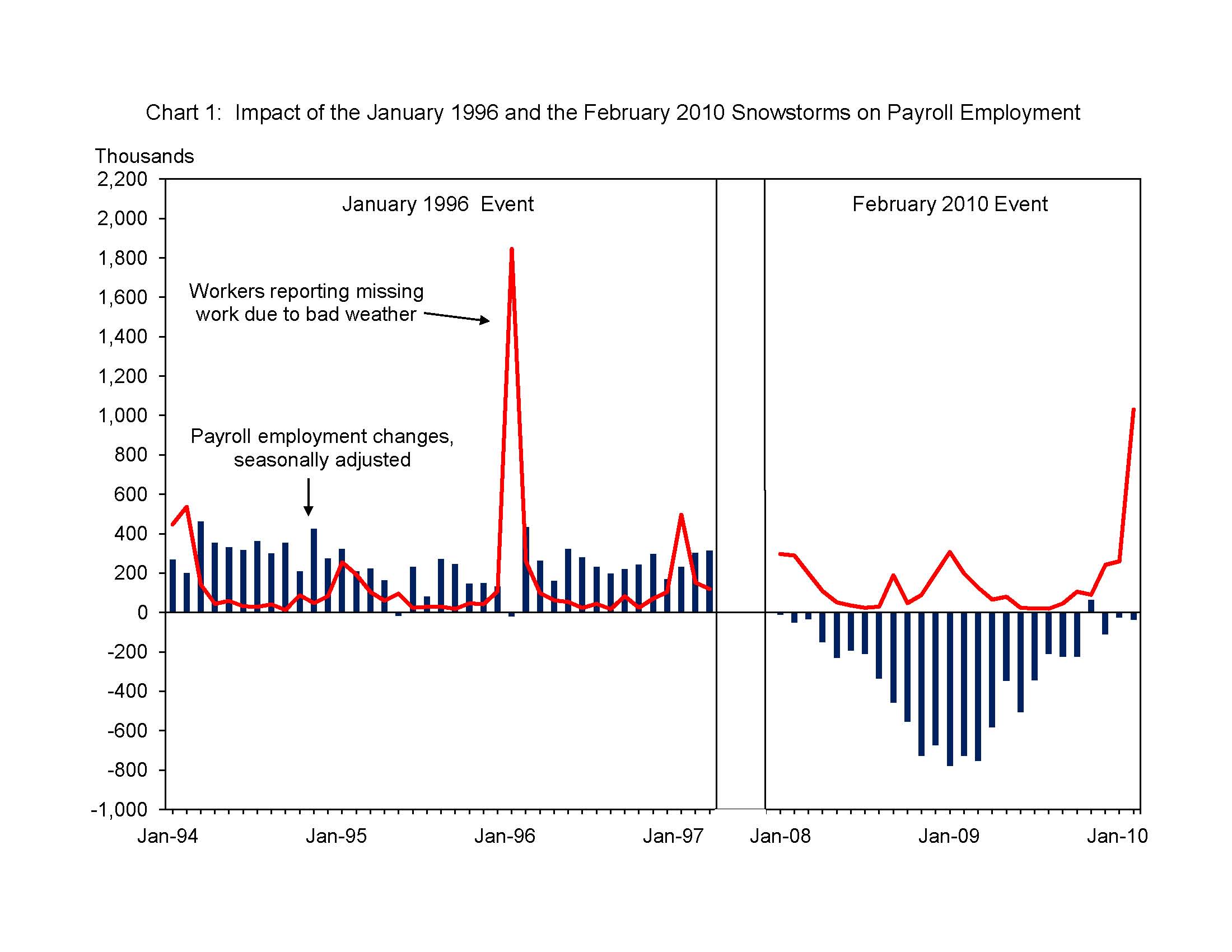 Table 1 shows that in January 1996, payroll employment growth was 210,000 below the five-month moving average.  The table also shows the effect of six other important storms since 1976 (as measured by the household survey data) on not working due to bad weather.  As the table shows, the shortfall in payroll employment growth ranged from 53,000 to 210,000.  Although the February 2010 bad weather was less than half as severe as the January 1996 event, it was similar in scale to several of the others, such as January 1978 (when employment fell 146,000 below trend).  In view of the events shown in the table, an estimate of a bad-weather effect of roughly  100,000 for February 2010 appears reasonable. 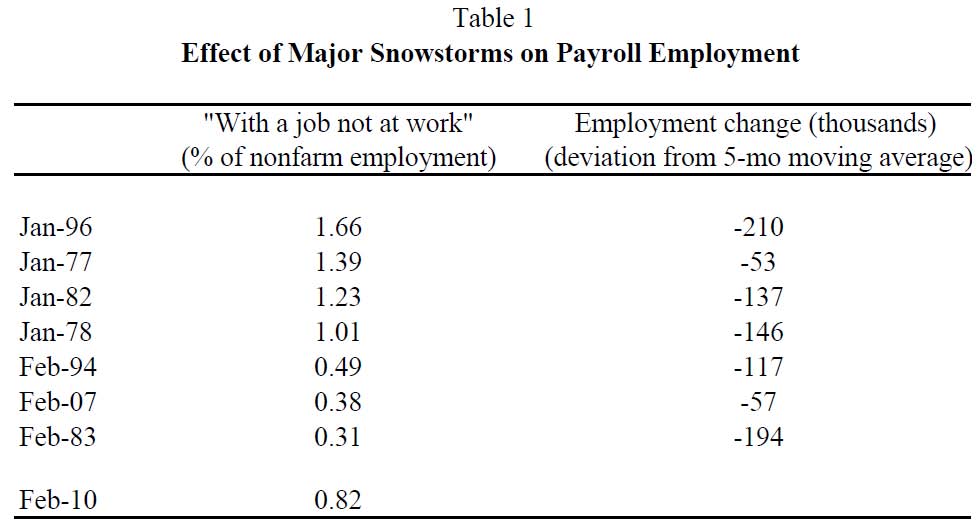 As shown in table 2, bad weather often has a big effect on the length of the workweek.  Another household survey question reveals the number of short workweeks among those who usually work full time (LNU02033223 on the BLS database).  Scaled against earlier storms, it appears that the February 2010 storm likely reduced the workweek by about 0.3 hour. 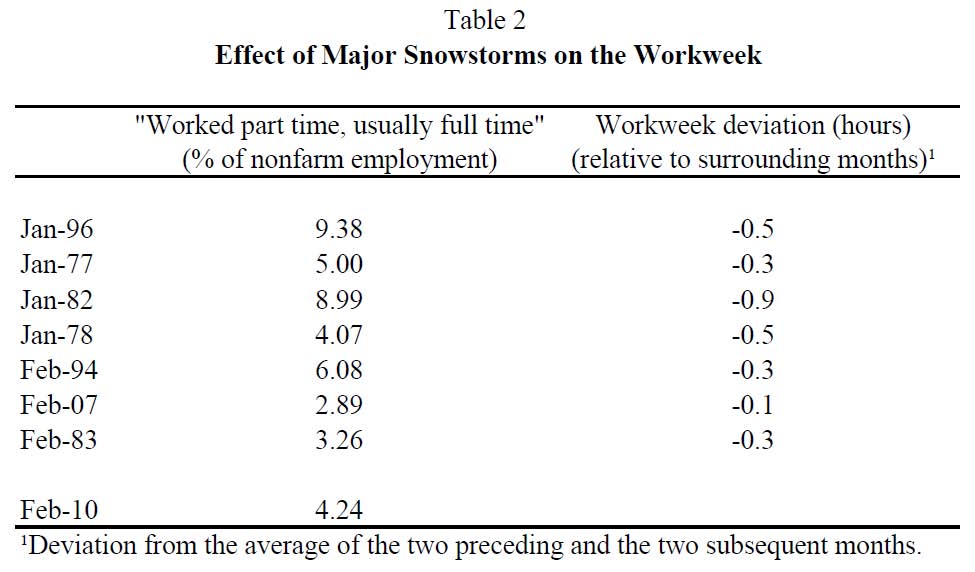 How the Recent Storms Compare with Previous Major Storms

As can be seen in the weather map of the February 4-7 storm, and the February 9-11 storm, one or both of the February storms affected the highly populated region from Richmond to New York, with both storms creating heavy snowfall in the Washington to Philadelphia region.  According to NOAA, over 12 million people experienced over 30 inches of snow from the two storms combined.

Measured by the impact on the population, these storms individually rank as the 20th and the 25th most severe snowstorms since 1956, according to National Oceanic and Atmospheric Administration’s (NOAA’s) Northeast Snowfall Impact Scale (NESIS).  According to NOAA, their combined impact is much more severe, however, and ranks their combined snowfall on a par with the January 1996 snowstorm, the second most severe in a record that extends back to 1956.

On the basis of the two bad-weather variables from the household survey, the two February storms do not appear to have as large an effect on the February jobs report as might have been expected based on the NESIS.  In particular, the February 2010 storms appear to have had only about half as large an effect on the survey reference week as did the January 1996 storm.  Differences between the severity indicated by the NESIS and the bad-weather variables from the household survey could be accounted for by factors such as the timing of the storms relative to the survey week, the efficacy of snow removal between the two storms, as well as many others. That said, the two storms had a major effect on the labor market survey.

The workers who were unable to work in the February survey week because of the weather are likely to be working in March.  Thus, whatever negative impact the weather had on February employment growth will likely be roughly matched by a positive impact on March employment growth.  Similarly, the workweek is likely to rebound to a more normal level.