Getting Outside the Four Walls of Washington

March 11, 2010 at 10:01 AM ET by Vivek Kundra
Twitter Facebook Email
Summary:
United States CIO Vivek Kundra travels beyond the Beltway to learn more about innovative technologies that can improve government services and drive progress and productivity.

I just returned from a productive trip to the West Coast, where I met with technology innovators from the private sector and state and local governments to hear their ideas about how the Federal Government can leverage the power of technology to deliver better results for the American people. As I’ve said before, the Federal Government does not have a monopoly on the best ideas, and in order to truly change business as usual here in Washington --  we’ve got to look beyond the Beltway.

The Obama Administration is committed to making the Federal Government work better for the American people.  Closing the technology gap between the private and public sectors is essential to delivering the best results possible.  That is why I returned to the West Coast to continue to meet with leaders who have taken innovative steps and implemented bold strategies to drive progress and productivity.

The power of raw data to provide consumers with relevant information and inform their decisions is already being realized. For example, as I was heading to the airport, I used “FlyOnTime.us” to check if my flight was on time and to see what the wait in line would be. This innovative website was created by a group of independent developers using Data.gov.

My first stop was San Francisco, where I joined Mayor Gavin Newsom and city CIO Chris Vein for the launch of the nationwide Open311 API (Application Programming Interface) initiative, which will open up access to local government services across the country. Open311 will enable people to track the status of repairs or improvements, while also allowing them to make new requests for services. For example, I can use the same application when I am home in Washington, DC to report a broken parking meter as I would in San Francisco. I also spoke to CIOs from Boston, Chicago, DC, Los Angeles, Seattle, and San Francisco about accelerating the development of applications that the American people can use in their everyday lives.


From downtown San Francisco, it was out to Silicon Valley to meet with venture capitalists and technology innovators, including Mint.com, Mozilla, and Facebook, at IDEO Labs to discuss how government can improve how it is delivering services to the American people. We used a visual storyboard concept to capture our conversation, which you can see here.

Later that afternoon, I met with companies like Apple and Google to learn how innovation is happening in the consumer space, through new platforms such as Apple’s online App Store.

On Thursday, I travelled to the “other” Washington, where I started the day with CIOs from organizations such as Weyerhaeuser and Microsoft to hear about how they successfully manage large-scale IT projects. I also had the opportunity to look at some of the impressive investments in next generation technologies being made by companies like Microsoft and Amazon.

I then delivered a speech at the University of Washington titled “Making Government Work: Closing the Technology Gap to Deliver for the American People.” I was very encouraged by the response and was pleasantly surprised when following my speech, dozens of professors and students lined up to ask questions and continue the dialogue. 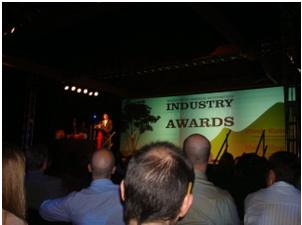 At the end of the day, I attended an industry awards celebration for local technology entrepreneurs, hosted by the Washington Technology Industry Association. It was great to see entrepreneurs from the “other” Washington talk to me about their ideas for helping us change the way Washington, DC works.