March 10, 2010 at 1:31 PM ET by Tina Tchen
Twitter Facebook Email
Summary:
Tina Tchen details how the Office of National AIDS Policy is working with partners throughout the Federal Government to raise awareness and aid the prevention and treatment of a domestic epidemic where a women in the U.S. tests positive for HIV every 35 minutes.

Today, we commemorate the 5th annual National Women and Girls HIV/AIDS Awareness Day.  Yesterday, I had the opportunity to participate in a briefing held by the National Alliance for State and Territorial AIDS Directors (NASTAD) and the HHS Office on Women’s Health with important leaders in Congress.  The event highlighted how the domestic epidemic is affecting women and how much we need to maintain our commitment to addressing this public health issue. 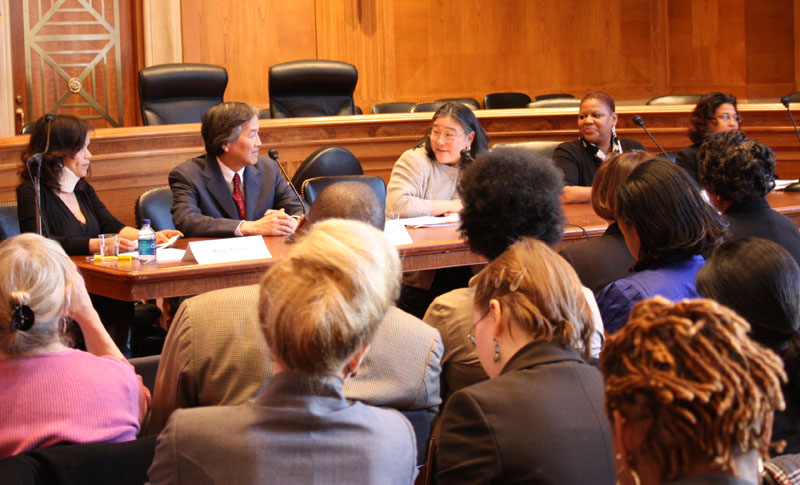 The statistics are sobering:  Every 35 minutes, a woman tests positive for HIV in the United States.  While women in the U.S. represented 8 percent of AIDS diagnoses in the 1980’s, they now account for 27 percent.  The HIV epidemic in the U.S. disproportionately impacts women of color:  HIV/AIDS is one of the leading causes of death among black women and Latinas.  Compared to white women, the AIDS case rate is 5 times higher for Latinas and 20 times higher for black women.  Clearly, we must redouble our prevention efforts as well as improve care and treatment for women living with HIV.

It is imperative that HIV prevention efforts take into account the way in which many women in the U.S. become infected with HIV, as more than 80 percent of HIV/AIDS cases among women and teenage girls are attributable to heterosexual contact.  It is also important to increase access to female-controlled prevention methods, such as the female condom, and to develop effective microbicides and vaccines.

The Office of National AIDS Policy (ONAP) is leading a team of Federal Agency partners to develop a National HIV/AIDS Strategy and strengthen our nation’s response to the domestic epidemic.  Working with a wide range of stakeholders such as state and local governments, businesses, faith communities, service providers, and others will be critical to implementing the national strategy.

Since the beginning of the epidemic, there have been significant reductions in mother-to-child transmission of HIV in the U.S. Research has also shown that progress is possible through targeted prevention programs that are effective in reducing risky behaviors among HIV-positive and HIV-negative women.  But there is still work to be done, a major piece of which is enacting reforms to our health insurance system that will expand access to care. Key to these reforms are making preventive care accessible and ensuring that Americans, including women living with HIV, are not excluded from being insured due to a preexisting condition.