March 19, 2010 at 11:47 AM ET by Kareem Dale
Twitter Facebook Email
Summary:
Kareem Dale, Special Assistant to the President for Disability Policy, tells some great stories from this year's Paralympics where he was part of the Presidential delegation, complete with photos.

I know where I’ll be and it will not be watching March madness like most of the country.  I’ll be in front of my computer logged onto the Paralympic website, watching the United States Paralympic hockey team play for the gold medal.  Anyone who knows me knows that I have never been a hockey fan.  But that all changed during my visit to Vancouver for the Paralympic Winter Games where I was part of the Presidential delegation.  Now, I can’t tell you I’ll be watching the Chicago Blackhawks or the Washington Capitals in the future, but the Paralympic hockey game I watched got me, well, like our President is fond of saying, all fired up and ready to go!

Our visit to Vancouver was an extraordinary experience with an outstanding group of individuals representing the President and the United States of America.  The head of the delegation was Secretary of Veterans Affairs Eric Shinseki and he was joined by administration officials including Administrator Lisa Jackson of the EPA, US Ambassador to Canada David Jacobson, and me.  The delegation also included 4 former Paralympic medal winning athletes including Jim Martinson, Mike May, Bonnie St. John and Melissa Stockwell.  The delegation was supported by staff from the EPA, VA and Department of State Protocol office, all of whom were outstanding and extremely supportive of the US Paralympic athletes.  Our traveling party, including guests, totaled about 25 people. 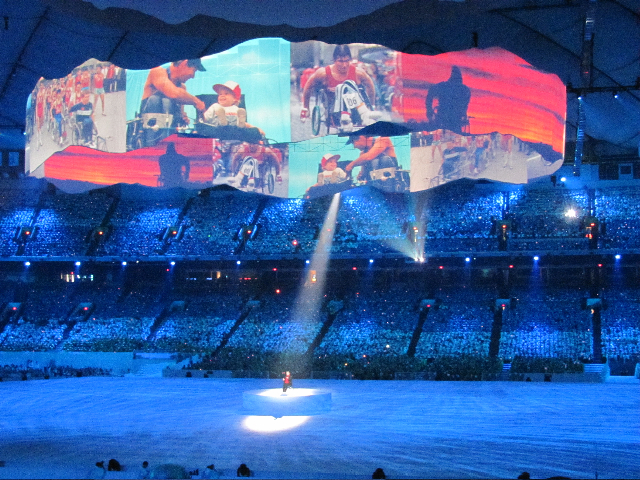 Opening Ceremonies at the 2010 Paralympics.

By 1:00 on Friday, March 12, the entire delegation had arrived and we were ready to take Vancouver by storm.  We kicked off the festivities with a reception with USOC members and supporters. Secretary Shinseki delivered some inspiring remarks.  We had a chance to meet some outstanding athletes and young people who will be Paralympic athletes of the future.  And, something that would become a theme of our entire weekend, we were served food.

We next attended an IPC hosted reception prior to opening ceremonies where we were again served something to eat.  The opening ceremonies were mind blowing.  Imagine 60,000 people flashing lights, waving their hands, standing, singing, dancing and roaring their approval and satisfaction for two hours and 45 minutes of outstanding entertainment.  The thing that kept going through my mind was that people with disabilities really have come a long way in the last 25 years.  The ceremony featured musical performances, hundreds of children dancing, speeches by Canadian and IPC officials, introduction of the athletes and of course lighting of the torch.  For someone like me that has attended championship sporting events in professional basketball and baseball, I have never been in a louder arena than this one when they announced the US and Canadian Paralympic athletes.  The spirit of the Canadians supporting their Paralympic athletes was something to behold.  They chanted slogans, stomped their feet and generally rocked the house!

We concluded day 1 with another reception with members of the USOC Board of Directors, and yes, for the third time in a little over 4 hours, we were served more food.  Needless to say, no one needed to order room service.

We started with a drive to Whistler which I’m told is one of the most beautiful drives but for this blind guy, it was an opportunity to read a good book—I’m taking the sighted folks word that it’s beautiful.  We first watched skiing and then the biathlon.  We saw an athlete in the biathlon with no arms shoot his gun with his teeth.  True athletic brilliance.  Because we were getting hungry, we proceeded to the next event of downhill skiing, but it was postponed due to fog.  Never fear though, we were able to pass the time in the hospitality room where, you guessed it, plenty of food was being served.

Before proceeding to the next event, we took a short break to visit the Paralympic public village for shopping.  Oh yeah, and we had lunch too.

Then, it was off to the athletes living quarters for a tour.  It was amazing to meet and witness this incredible operation that includes doctors, physical therapists, a hospital, full gym, office facilities and that’s right, a full cafeteria.  And, well, there was a cafeteria, so we had to stop and eat dinner.  But, we had a good excuse. We had dinner with some of the US athletes.  It really was a highlight to meet the athletes and let them know that the President and US were supporting them.  You could sense their excitement that we had such a large delegation with senior officials. I provided some tips on skiing but let’s hope they ignored them.

The Presidential Delegation at the Paralympics.

We drove back to Vancouver (I didn’t drive), day 2 concluded and thankfully, there was no more food.

We started the day with a visit to the Vancouver athletes’ living quarters (there was a location in both Vancouver and Whistler).  We took a tour and this, like Whistler, was an amazing campus.  Keeping with our theme, they fed us a light snack consisting of cold cut sandwiches, fruit, crackers and all the healthy vitamin water you could drink.  We then visited with some of our US sled hockey athletes before completing the tour.

After completing the tour, we checked out the cafeteria just to see how it compared to the Whistler cafeteria.  It was hard to compare the two without tasting the food, so we decided to have lunch to complete our analysis.  These were not your ordinary cafeterias—they had chefs cooking fresh made to order stir fry, fresh fish, and numerous other options to satisfy anyone’s pallet.  It really was a first class operation in support of the US Paralympic athletes.

We were then off to curling, in which our US Ambassador to Canada is an expert and burgeoning superstar.  Look for him in the next Olympics.  This is a difficult game to follow and understand, but there was a nice hospitality room with some food to provide some sustenance while I puzzled over the game’s complexities.

Despite the difficulty for someone who can’t see to understand the game, the enthusiasm in the arena was electric.  In particular, the hometown Canada fans were attempting to bring down the house with their stomping and chanting.  It really brought chills to me that folks were so enthusiastic about the excellence of athletes with disabilities. 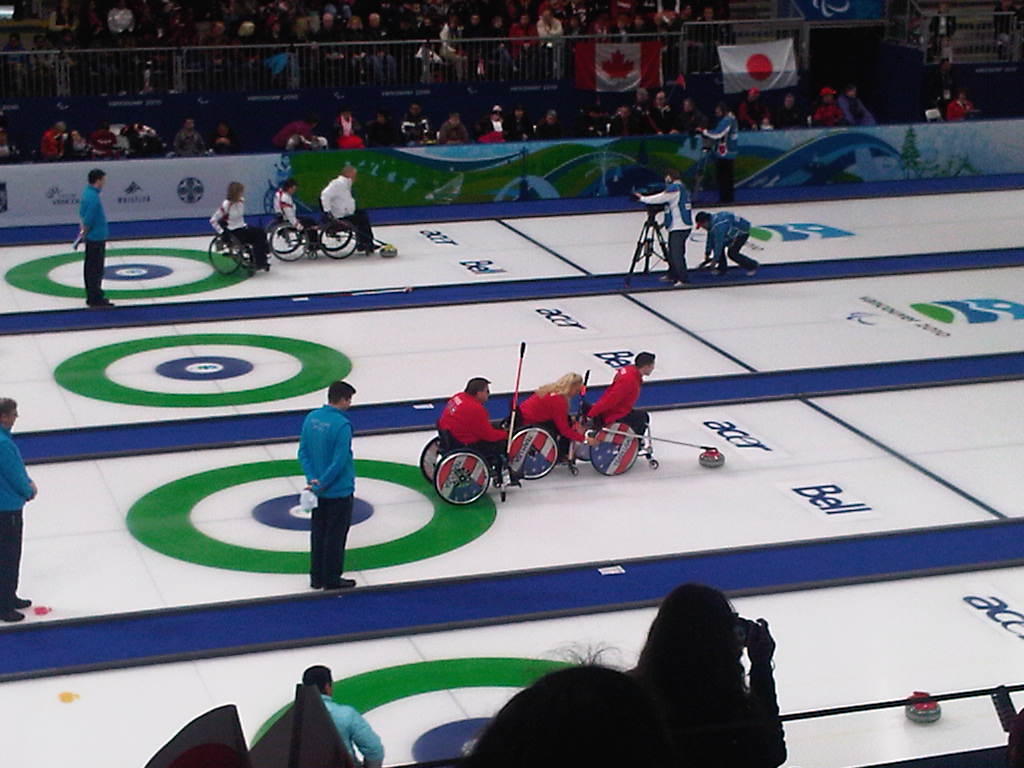 The curling competition at the 2010 Paralympics.

And, let me pause for a second to drive home the point that for those who may not be familiar with these games or these athletes, they are truly extraordinary athletes performing at extraordinary levels, reflecting the very best in the World.  This, above all, became crystal clear for those of us that didn’t have lots of experience with the Paralympic games.  It wasn’t about their disability—it was about phenomenal athletic achievement.

After a short break in the action, we attended the highlight for me, sled hockey.  As stated earlier, I am not a hockey fan.  But, with the play by play audio description, I was able to follow the game.  It was unbelievably exciting end to end action.  It was especially great, considering the US pitched a shutout and dominated their opponents 3-0.  We were frequently on our feet and numerous chants of USA broke out and reverberated through the arena.  We roared our approval with every goal and every stop. Thankfully, there was a nice hospitality room where we were able to fuel up with food during the game given the energy we expended while cheering.

We had a chance to meet the athletes following the game. Just like the other times, meeting, visiting and letting the athletes personally know their country was behind them, was the highlight.  They were very excited that we were there cheering for them. 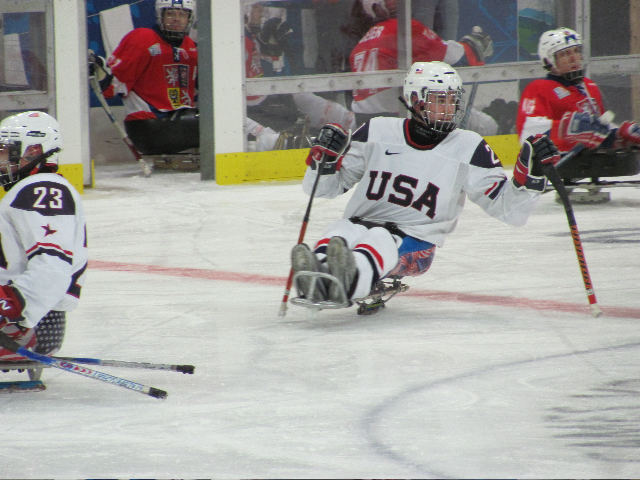 Hockey at the 2010 Paralympics.

We finished up day 3 with, what else, a nice delegation dinner.  Our head of delegation, Secretary Shinseki and Mrs. Shinseki, were extremely gracious and led us with great dignity.  The remaining delegation members were equally outstanding.  I was honored to be a part of this delegation and represent the President.

Here’s to our outstanding US Paralympic athletes.

Well, I’m off to hit the gym and work off all that food!

Former Special Assistant to the President for Disability Policy