March 22, 2010 at 6:21 PM ET by Kate Moran
Twitter Facebook Email
Summary:
OSTP senior policy analyst Kate Moran just returned from Miami, where she helped greet the return of Research Vessel (R/V) Endeavor after its voyage to Haiti in the aftermath of the devastating January 12 earthquake.

[Ed. Note: OSTP senior policy analyst Kate Moran just returned from Miami, where she helped greet the return of Research Vessel (R/V) Endeavor after its voyage to Haiti in the aftermath of the devastating January 12 earthquake. In a remarkable demonstration of how nimble the Federal scientific enterprise can be, the ship—which is owned by the National Science Foundation and operated by the University of Rhode Island—steamed out of Narragansett, RI, only days after the earthquake, a far cry from the months of preparations usually required before a scientific mission takes to sea.

The research plan, put together on short notice under the leadership of Cecilia McHugh, a marine geologist at Columbia University’s Lamont-Doherty Earth Observatory and professor at Queens College in New York, was to study the sea bottom near the quake site before wave action, storms, and other shallow-water processes erased any underwater features caused or revealed by the earthquake. The hope is that the research might give clues to understanding this unique quake-prone area and the likelihood and probable scale of follow-on temblors in the region. The research will also help to reveal why a small tsunami followed the quake despite predictions to the contrary by computer models. Along the way, the crew also managed to perform a number of humanitarian missions. Here is her report.]

I met the R/V Endeavor at Pier 22 in Port Everglades, anxious to hear from some of my longtime colleagues how the trip had gone and excited to get some of the first looks at the data they had collected. They told me that when the ship’s crew had first learned that it had been selected to conduct the expedition, Endeavor was alongside a ship repair facility with its generators disassembled—part of a routine wintertime refit. Putting the pieces back together normally takes a month, but the crew completed the work in one week. The scientific expedition was organized with similar rapidity by Lamont-Doherty scientists, with participation of researchers from the Haitian Bureau of Mines and the University of Haiti as well as the universities of Missouri, Texas, California and Rhode Island. The images they brought back were spectacular, including sonar images of the seafloor and seismic profiles that revealed structures down to about 50 meters below the seafloor. The crew also managed to retrieve a number of sediment cores.

The ship spent most of its two-week mission in waters just west of the capital city of Port-au-Prince, around the coastal village of Grand Goâve. As the NSF had previously reported, the surprising presence of corals stranded above sea level had made it clear, in conjunction with other evidence, that the coast in this area had been thrust upward as much as a foot and a half during the quake, while adjoining areas had apparently dropped—suggesting, along with other observations, the presence of unmapped faults in addition to the known, main fault in that area.

The science team’s new maps of the seafloor revealed what is likely a slip along an underwater fault that occurred on January 12th. While the team members were surveying offshore, they were communicating, in real time, with a science team working onshore. Because of the work conducted on Endeavor, the land-based team was able to locate and conduct studies where the offshore fault extended onshore. The science team aboard Endeavor also discovered a huge sediment plume (600 meters from top to bottom and extending across a wide area) in the water column that was likely caused by earthquake-induced underwater landslides. Such landslides are suspected to have been the cause of the observed tsunamis. These plumes eventually settle and are deposited over a large area, leaving an easily distinguished layer of sediment. By studying the sediment cores they collected, team members will be able to identify and determine the age of earlier sediment markers and reconstruct past earthquakes to help predict future events.

But this voyage was not just about data. The ship also carried to Port-au-Prince more than 40 large tents, each the size of a Quonset hut, donated by the children’s charity Plan USA. Endeavor was able to efficiently discharge its humanitarian cargo upon arrival with the assistance of U.S. Navy Port Logistics and Military Sealift Command personnel. The tents were used to set up the first schools in the affected area. Once in Haiti, the ship also picked up two graduate students and a research scientist from the Haitian Bureau of Mines in Port-au-Prince, who participated in the imaging studies. The university there is in ruins, but thanks to the actions of Professor Eric Calais (a member of the onshore science team) from Purdue University, the two students have now been granted admission to Purdue to finish their studies.

Before leaving, Endeavor was able to accomplish an additional valuable task: It performed seafloor sonar surveys of an area that shows potential to be developed into a new port. As has been widely reported, the existing port is considered unusable and irreparable, in part because of the large amount of wreckage blocking the waters there. Operating in part at night to avoid the small fishing boats in the area, Endeavor mapped out the sea bottom of a promising area that may become the country’s next major port.

After spending a few hours onboard Endeavor with Cecilia and her team, I came away buoyed by what I had seen and heard. The expedition was mobilized with record speed because of a dedicated ship operator; a federal science agency responded to the disaster by funding the research quickly; the expert science team (led by a dynamic woman with a long record of mentoring students of all ages) was organized on a similarly short time-line; research institutions contributed and shipped science equipment at their own cost; the initial science results were spectacular with more results to come; students participated shoulder-to-shoulder with experienced scientists; Haitian students, who lost their university in the quake, will now finish their studies; the captain and crew carefully took the ship into hazardous areas to achieve the science and deliver the tents; and all of this was complemented by two humanitarian efforts.

Kate Moran is a Senior Policy Analyst at OSTP 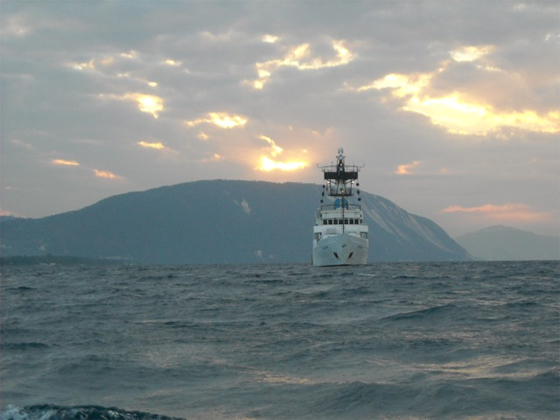 The U.S. Research Vessel Endeavor is seen here off the coast of Haiti. (Photo by Michael Brennan) March 22, 2010. 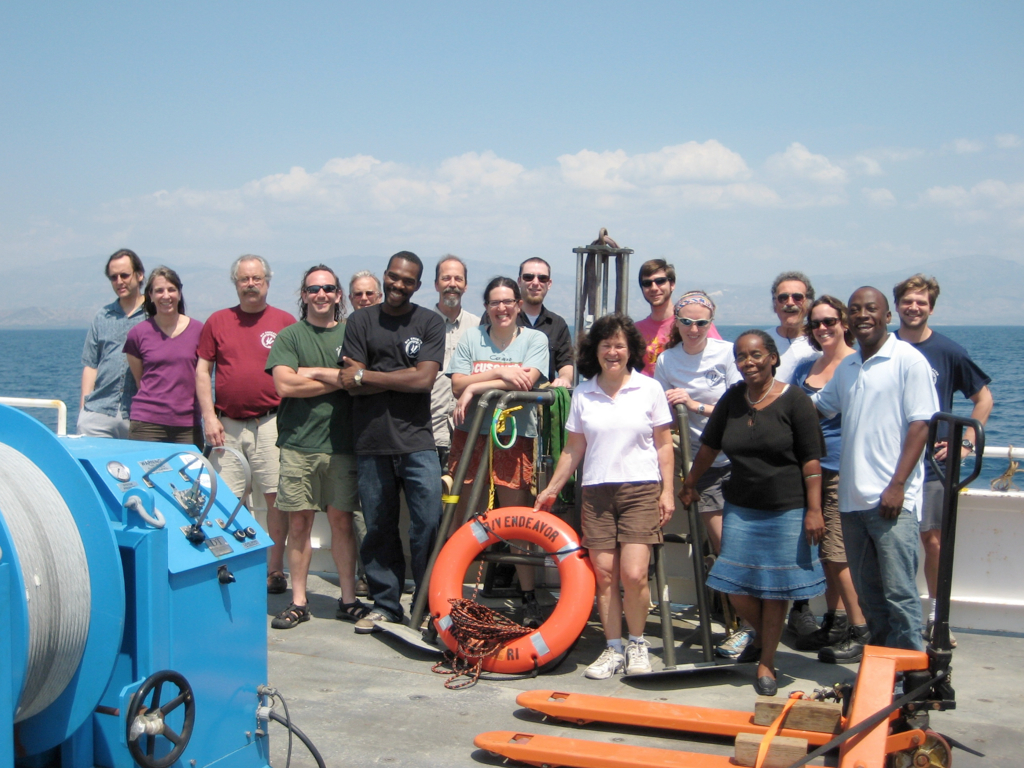 The science team takes time out for a group photo on the bow of the R/V Endeavor. In the center, holding the life-ring, is chief scientist Dr. Ceclia McHugh. March 23, 2010. 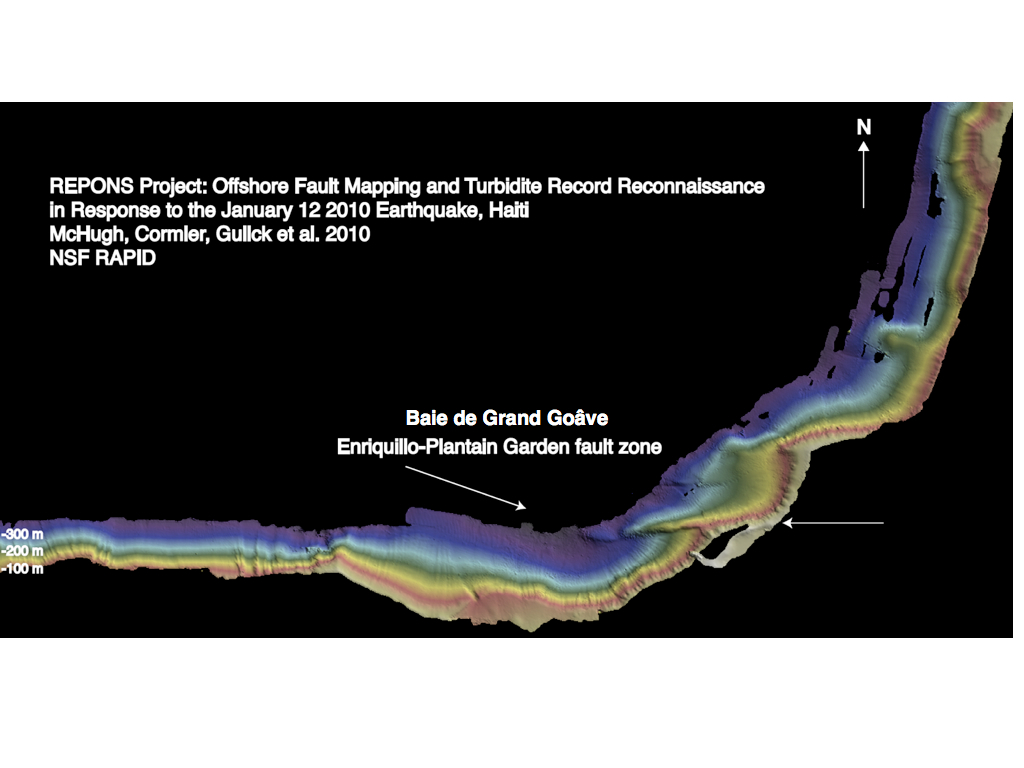 Above is an image of the seafloor offshore Haiti reconstructed from sonar survey data collected during this expedition. The colors represent water depth where reds are shallower and blues are deeper water. The fault is identified by the arrows and the offset in the colors may represent recent slip along the fault that occurred on January 12th, 2010. Further analyses of these data are underway by the science team. March 23, 2010.